Jump Drive: Build the Galactic Empire of Your Dreams in 30 Minutes or Less - Nerdist

Jump Drive: Build the Galactic Empire of Your Dreams in 30 Minutes or Less

Ever wanted a great card game that allowed you to build your own galactic space empire but didn’t take an hour or more? Well, from the man behind Race for the Galaxy, has come Jump Drive.

Jump Drive is a short, 10-30 minute card game where players must create their own competing empires, whether this is through militaristic advancements, technology, or colonization is up to the player. The goal is to play strategically enough to have the most victory points once the game ends. I mean it when I say these games are short; you have to be quick on your feet to win.

The game itself isn’t too complicated once you start figuring out how each of the cards benefit you. Each player is dealt seven cards to begin with then they must discard two cards face down. The discard pile remains face down the entire game, so be careful to not mix it up with the regular deck. (I just kept it on the opposite side of the table, far away from the other one.) After dealing, just make sure that you have your Explore tiles and Victory Point (VP) tiles within reach and you can begin! 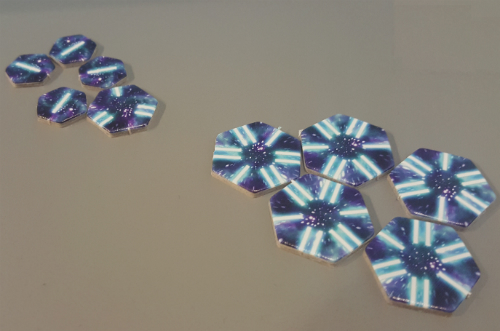 Once everyone has discarded two cards, actual play commences. You can do one of multiple things on a turn to try and gain the most Victory Points. Something to keep in mind before playing any cards is that you must spend cards to play cards. For example, if you have a card that has a three up at the top, you must discard three cards to use it unless you have a card that lowers the cost. Other ways to lessen the cost of cards can be to play certain ones by themselves (you can play up to two cards at a time). If you play a development card (marked by a diamond) by itself then you can discard one fewer card to pay for it. For world cards (marked by a circle), the cost does not lessen when played by themselves but they do let you draw one card.

Furthermore, if you decide to play two cards and pay the full cost then you can only play one development and one world unless otherwise noted by a card you have in play. The main thing here is to read the cards and see what they allow you to do. Some will help you conquer worlds easier and others will make developments cheaper. Once you’ve both placed your cards face down, turn them over and organize your empire. Also, just in case you forget any of this, the game comes with a handy-dandy cheat sheet card! 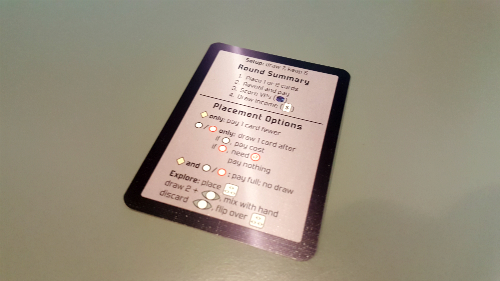 At the end of each round, the players will total up how many points they have and draw as many cards as is allotted by the bottom of the cards in play. The player hands can only cap at 10 cards and players must discard if they have more than that in their hand.  When I was playing this, we chose which ones to discard but you can always make it more fun by blindly discarding cards before you see them. Always remember to be careful, as the game ends once one player gains 50 Victory Points. This means that you really need to optimize how you play your cards; I made the mistake of focusing too much on cards that let me draw more cards than ones that gave me more points.

Like most card games, this game is mostly about following the rules as they come. There are a base set of guidelines to use but it will really boil down to what you have in your hand and when you play that card. Some cards are better if you have certain cards in play in your empire. For example, the Galactic Trendsetters cost less if you have the Galactic Advertisements card in play. (Side note, I purposefully used this example so that I can show off my personal favorite card in this game, which was the Galactic Trendsetters card.) 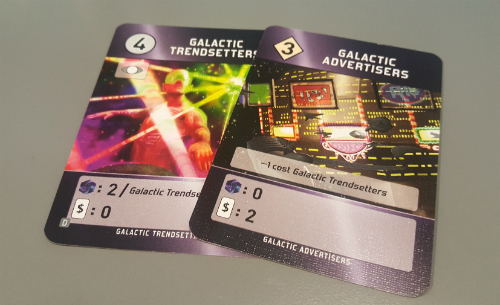 Overall, I really enjoyed Jump Drive; it was short, simple, and fun to play. It took maybe twenty minutes to play a round and it wasn’t too complicated to pick up the rules even though I had never played Race for the Galaxy before. It’s very much its own game with a great 80’s sci-fi pastiche. I, honestly, really loved the artwork; it was colorful, eye-catching, and wonderfully retro.

Be sure to check out Jump Drive here!

What do you guys think? Is this your kind of game? Do you love the art as much as I do? Let us know in the comments below!

How Steve Trevor’s Role Took Inspiration From Another ...

Be The Secret Agent Of Your Dreams in Warehouse 13: The Boar...

Immerse Yourself in The Kingkiller Chronicles With Tak: A Be...