Even if you’re not a Dwayne Johnson superfan, Jumanji: Welcome to the Jungle took what might have felt like IP trawling and turned it into a fun update of a seminal family-friendly adventure movie. The chemistry of Johnson and his co-stars, skillfully plugged into characters unlike they typically play, transformed a potentially lackluster reboot into something inventive and briskly funny. Adding characters to both the electronic and the real worlds, Jumanji: The Next Level shrewdly attempts to further push these movie stars out of their comfort zone, but the end result feels more like a re-upped franchise than a proper video game sequel, overpowering the cast’s natural appeal with set pieces engineered more for a bigger scale than a better story. 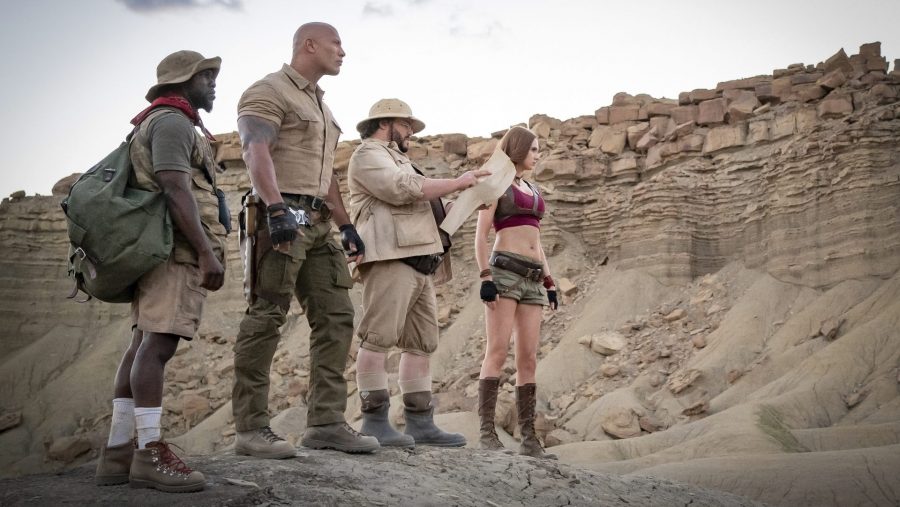 A year after the events of the first film, Spencer (Alex Wolff) returns home from college in New York to visit his family, including his Uncle Eddie (Danny DeVito), and more reluctantly, his friends Fridge (Ser’Darius Blain), Martha (Morgan Turner), and Bethany (Madison Iseman). Anxious and uninspired by the routines of real life, Spencer reassembles the pieces of the “Jumanji” video game to play again as Dr. Smolder Bravestone (Johnson). But when his friends follow Spencer back into its world, Uncle Eddie and his estranged best friend Milo (Danny Glover) also accidentally get sucked into the game, some receiving avatars they didn’t choose: Martha once again plays Ruby Roundhouse (Karen Gillan), but Eddie gets Bravestone, Milo gets “Mouse” Finbar ( Kevin Hart), and Fridge gets Shelly Oberon ( Jack Black).

While the two septuagenarians slowly adjust to their new reality, Ruby, Eddie and Mouse lead a rescue expedition to find Spencer, who they later locate as he’s playing Ming Fleetfoot ( Awkwafina), a crafty pickpocket. But they quickly discover that they’re not just re-playing the same game as before, and they must work together using new skills and abilities to steal it back and escape the game when a barbaric tyrant named Jurgen the Brutal (Rory McCann) steals a gem that threatens the harmony of Jumanji.

As demonstrated now multiple times including in Be Cool, Central Intelligence and Welcome to the Jungle, Dwayne Johnson is absolutely irresistible on screen when playing goofy, awkward and insecure—basically, against his physical type. In The Next Level, writers Jake Kasdan, Jeff Pinkner and Scott Rosenberg offer him the opportunity to play, effectively, a cranky old man, and on paper, it’s an inspired choice. Not only is it a new challenge for the actor, it refreshes the story told in this franchise. But even with Kevin Hart as his cheerful, glacially-paced counterpart Milo/Mouse, the effect adds up to less than the sum of its parts, especially after Awkwafina shows up doing a better Danny DeVito impersonation than Johnson’s. 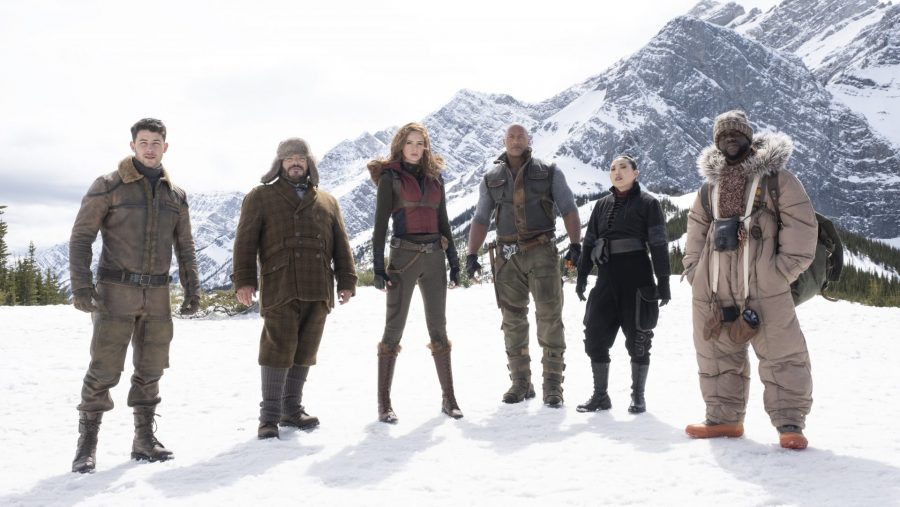 That said, it’s fun this time to watch Karen Gillan as Martha start to embrace and feel confident in Ruby Roundhouse’s body, while Jack Black reconciles Fridge’s natural athleticism with his own pudgy frame (his attempt at a burpee brings one of the movie’s funniest moments). Moreover, the actors do such a good job portraying the different layers of their characters’ identities that we always remember not just the movie stars on screen, but who’s maneuvering them from the inside. And even if McCann turns in a performance that’s (necessarily) less nuanced than his turn as The Hound on Game of Thrones, Kasdan makes some really playful, fun new additions in the supporting cast, such as Dania Ramirez as Bravestone’s ex-girlfriend, who maximizes her screen time with a delightfully vampy, over-the-top performance.

Additionally, several of the sequences deliver a really thrilling escalation of video-game action from the first film, in particular a race across swinging rope bridges while the team flees an army of mandrills. But too much of the movie feels bigger without necessarily expanding the scope of the characters or story, and often seems to forget it’s not just a big-budget action movie but a supposedly game taken, well, to the next level (a finale set in a steampunk dirigible comes more from Sky Captain and the World of Tomorrow than any game I’ve ever played).

Ultimately, Jumanji: The Next Level makes so many of the right choices that you want to give the cast and filmmakers points for trying, but it also somehow ups the stakes on its predecessor without making the experience any more enjoyable. Mind you, the film won’t make anyone less of a superfan of Johnson or his co-stars, but it’s a little bit like dying in a game you’re playing right after winning an extra life—you’re more or less back where you started without being sure if getting there was worth the effort.

Todd Gilchrist is the Managing Editor for Nerdist. You can find his film and TV reviews here. Follow him on Twitter!