GM Tips Our series to help Storytellers and Game Masters improve their craft and create memorable roleplaying experiences. Last week, we tackled one-shot games, and so it’s only natural we switch gears to discuss the importance of factions.

If you are a regular player in The Forgotten Realms, the Black Network of the Zhentarim is one of the iconic factions along the Sword Coast. They are arguably more popular than the Lord’s Alliance, or the Keepers of the Grove, but that’s because evil always pays well. Why wouldn’t you join the organization that was once led by the Chosen of Bane, Chembryl himself?

Factions play a significant role in any setting, allowing players to identify with larger organizations or for the storyteller to set the mood with a single description. In Vampire: The Masquerade entire games are designed between the Tal’Mahe’Ra versus the Sword of Caine (everyone thought I was going to say Sabbat vs. Camarilla there eh?). In Rifts, the Coalition provides the setting with a default set of anti-magic haters that for the players to foil every game session. By using factions appropriately, a storyteller can generate images and campaigns off the fly, or make a small session seem vastly more epic in scope.

Individuals can be heroes or deviate from the normal, and that’s what makes them special. Keep your factions motives simple and narrow-minded. An iconic focus for a faction provides everyone with a benchmark to play off of. How does the local faction captain feel about his organization’s policy to slaughter all orcs? Does a church that strives to do good, often find itself afoul of a local lords laws?

Your entire factions goal and purpose should be a simple sentence and nothing more. Dominate the Sword Coast. Easy, simple, and something you can expand upon by designing methods, means, and the classic five questions: Who, what, when, where, and how? From there you can make incredibly compelling characters within those boundaries. A perfect reference to this is the new Voltron: Legendary Defender series with Prince Lotor, or the entire Galra Empire.

So you’ve created your faction, or you are using a setting faction and it’s time to build your NPC’s. Any time the players interact with the faction, you should always strive to have three tiers of characters who know each other on the faction side. A Zhentarim Prince who rules the area and hires his cousin he recruited as a Zhentarim captain. That cousin, brought in his best friend Trudy, and she’s a new plucky foot soldier for the cause. Even though each of them are sworn to ‘Dominate the Sword Coast’, they will each do so in different ways.

Three characters, of three different tiers, who all know each other is a quick way to make the factions become alive. You don’t need to write up entire backstories and stat every character, but even the smallest relationship tree between three goons spices up any interaction: “You killed Theodore! Good. He’s been stealing from me for weeks…”

Always make sure that you keep your relationships to people of a different power level as well. It’s more compelling to have a Prince, Captain, and Footsoldier, than three footsoldiers. Plus, each one can then serve to offer a different plotline or escalating difficulty. 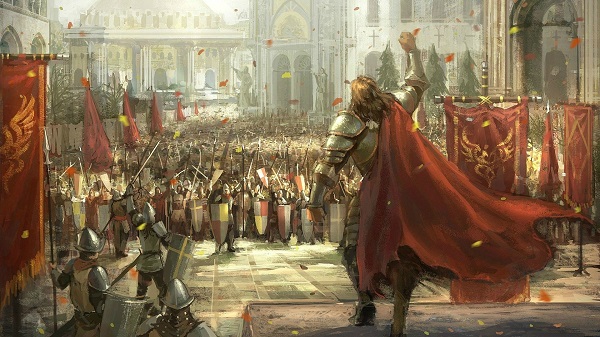 The final tip to make a faction seem alive, is to always have them in the story lines background recruiting. Show teachers training young lads from the nearby villages, or drop rumors about strings of kidnappings that have happened. Write yourself a post-it note and slap it on your GM screen if you have to: Every town, show recruiting. In classic ‘show don’t tell’ fashion, this repeated reminder that the faction is out there will lend realism to players who just murder them by the hundreds.

The other reason recruitment is vital to a roleplaying game is character growth. Often times, players will engage with the recruiters or those being pitched to and get into healthy social debates. This creates a different tier of conflict beyond the physical smashing that dominates many games and brings alignments and character motives to the forefront.

Have you created some truly epic factions? Share your tips in the comments below!

Featured Image by: Zhentarim from Daggerdale 2 by Bedlam Games and Wizards of the Coast

Image Credits: Wizards of the CoastRick Heinz is the author of The Seventh Age: Dawn, and a storyteller with a focus on LARPs, Wraith: The Oblivion, Eclipse Phase, and many more. You can follow game or urban fantasy related thingies on Twitter or Facebook.