JINGLE JANGLE: A CHRISTMAS JOURNEY is a Vibrant and Magical Wonder - Nerdist

JINGLE JANGLE: A CHRISTMAS JOURNEY is a Vibrant and Magical Wonder

We are all comprised of childhood stories from film, audibles, or books. Those stories are our markers and guides for how we respond to this whirlwind called life; however, every now and then, we lose our way and need to be re-storied. But what happens when those stories don’t reflect us? How can we find ourselves when there are rare depictions outside of ourselves? Enter Jingle Jangle: A Christmas Journey (Jingle Jangle.) It gives us a story filled with spectacular colors in a wondrous, imaginative holiday setting.

The film, written and directed by David E. Talbert, has all the wonder and splendor of older Christmas films with a cast that showcases the magic and ability that resides in all of us. Jingle Jangle not only puts Black people front and center; it celebrates them. There’s all the Christmas spirit of belief, song, and dance that Ms. Johnston could shake a mistletoe at. It’s chock full of joy, emotion, and a story that children or adults can reach out to when life hits rough or when they just want to smile. 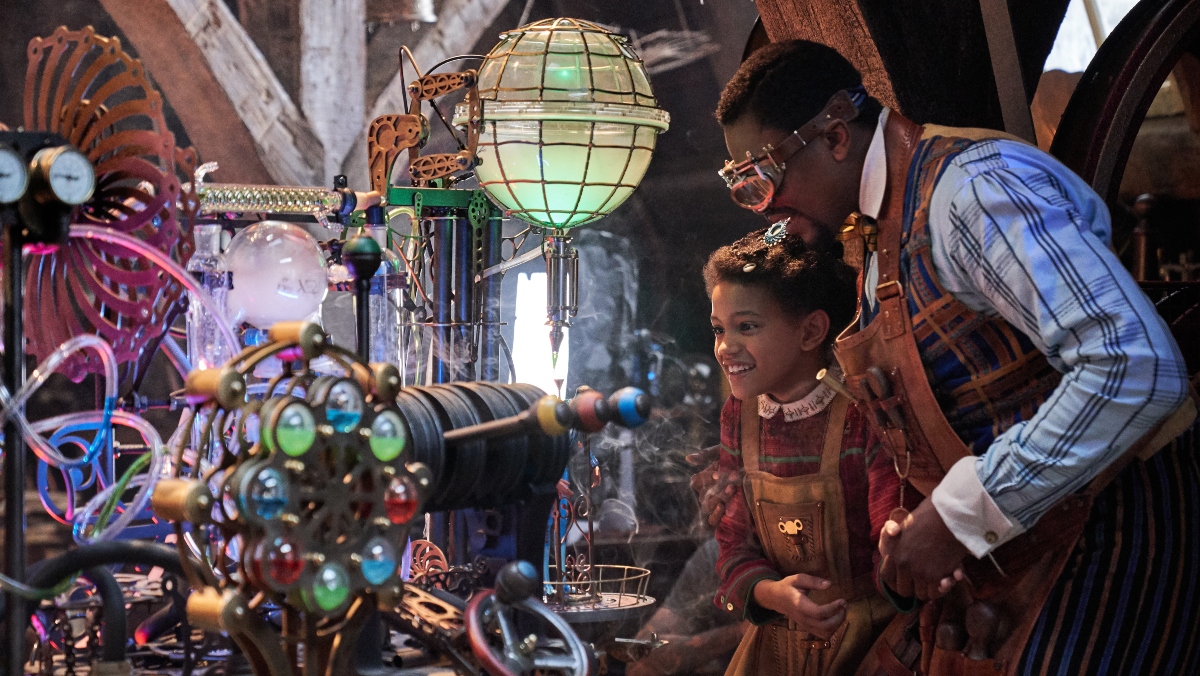 The story is about Jeronicus Jangle (Justin Cornwell/Forest Whitaker), a superb toymaker, who employs mathematical knowledge to create magical toys. When he is betrayed by his apprentice (Keegan-Michael Key) and his prized creation stolen, it’s up to his creative, genius granddaughter (Madalen Mills) to help him remember the spirit of belief and magic.

Jingle Jangle‘s setting is also special and unique. Imagine a world where math and magic collide; where there are equations for “spectacular!” While there are holiday films that have a Black cast, few have elements of wonder and magic that are as heavily featured as they are in this film. Many, such as The Best Man Holiday, exist in rural or urban settings instead of an imaginary setting. Very few of our stories have a world akin to Harry Potter films and fewer have that wrapped in a holiday.

The acting is all-around hilarious, moving, and dripping with talent. The young Jangle played by Justin Cornwell has all the joie de vivre that comes with self-assurance, love, and happiness. It’s impossible not to get swept away in his presence as his joy and excitement are like gravity, pulling everything to him. Forest Whitaker as the older Jeronicus Jangle is a perfect counterpoint. His pained, beleaguered portrayal is a stark contrast as he gives up believing in himself. Whitaker shows how reticent and awkward a person can become when they lose the strength of self-belief. 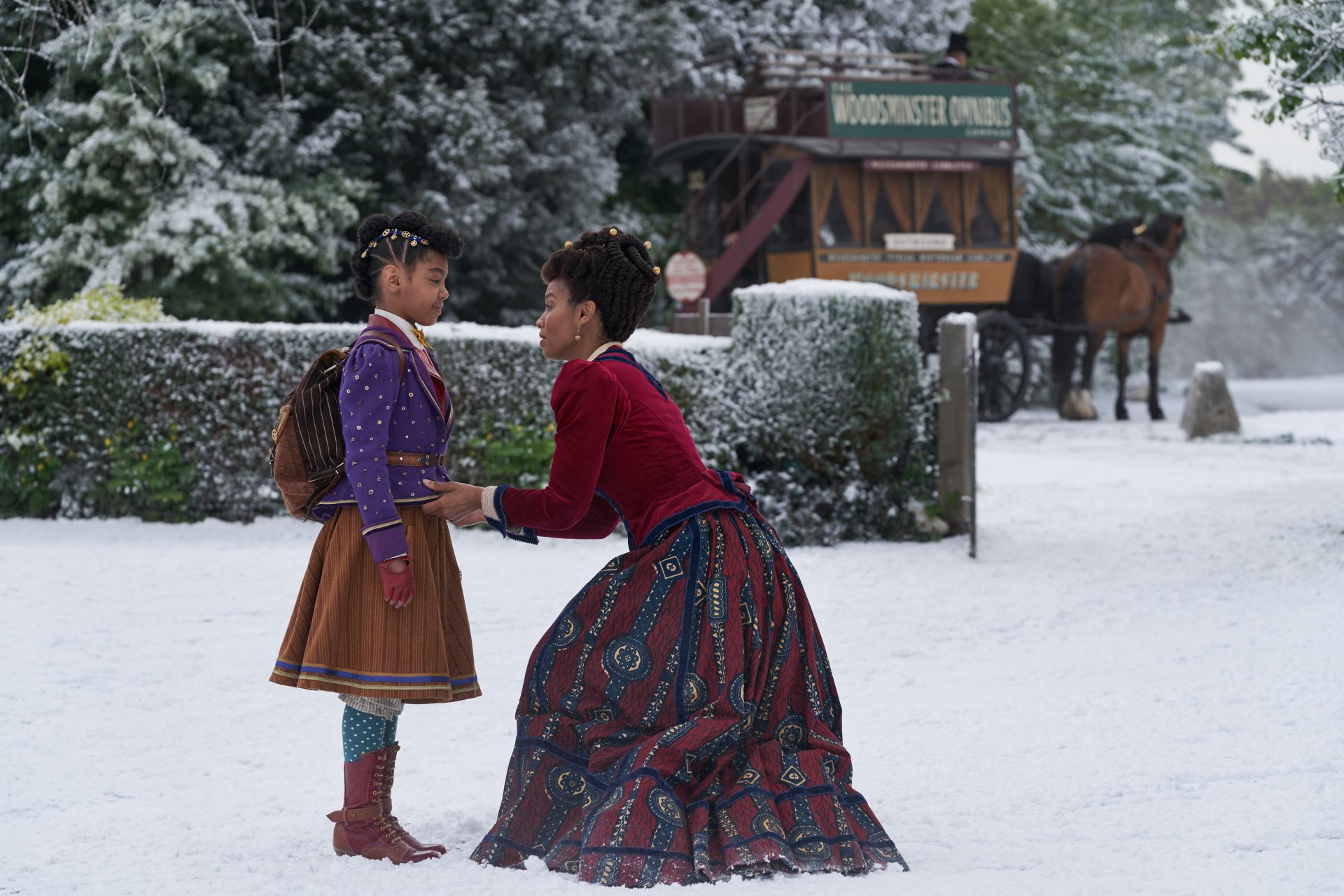 Madalen Mills is adorable, delightful, and shines as Jangle’s granddaughter Journey. She will have any child or adult believing in the possibilities that reside within themselves; something that is sorely lacking because the world often hammers it out of us. We are constantly told what we can’t accomplish, but the fight starts with not accepting it and holding onto our belief in what we can accomplish. Ms. Johnston (Lisa Davina Philip) is a spotlight in the film with her affection for Jangle, singing, and the backup group, all of which were wonderful to see as well.

Jingle Jangle‘s costumes and settings are gorgeous and picturesque so much so you can imagine it on a holiday Christmas postcard: “Happy Holidays from Cobblestone!” It feels like a world that exists on steam engines and magic which will leave many wishing fervently that they could relocate there. The songs will have young and old memorizing for holiday re-watches—yes, I’m waiting for the soundtrack to drop on November 13th, too.

The soundtrack has Usher featuring Kiana Ledé’s “This Day” which fills you with excitement to keep pursuing your dreams. Though I think the favorites—hard to pick—will be a tie between Mrs. Johnston’s “Miles and Miles” song to “Jerry”, as she affectionately calls Jangle, and Madalen Mills’ heartfelt song about possibilities. It’s no surprise that Jingle Jangle‘s songs hit given they have John Legend contributing original music as well as producing.

By default, being Black means you can’t have fictional stories of innocence, magic, and joy without a gritty reality. We aren’t allowed to be innocent, no matter our age, as evidenced by the news regularly. White people have many from Edward Scissorhands to Miracle on 34 Street to the stop-motion Rudolph The Red-Nosed Reindeer. It’s past time we gave our children stories that reflect them.

Jingle Jangle will and should be a staple every year when Christmas rolls around. There’s too much to love here and the fact that Black children have a Christmas story of their own when so many of us didn’t have that, fills me with joy. I hope to see more original films and stories that give children a glimpse of the possibilities in them.