Italy’s Prime Minister, Giuseppe Conte, announced on Monday that the entire country of Italy is quarantined. He enacted this decision to combat the spread of COVID-19, a.k.a. the coronavirus. There is a lot of reporting around this significant move to isolate the country, and the people within it, from each other. To help clarify things a bit, here are answers to nine key questions about Italy’s current countrywide quarantine.

2. What Does Countrywide Quarantine Mean for Italians?

According to a CNBC report, Conte requests citizens do not travel other than for work or emergencies. Conte also said they’re suspending all public gatherings and sporting events. In a recent Al Jazeera video (at around 1:43), Conte, via translation, says that “across the whole peninsula, people should avoid all movement… unless for work, emergencies, or health reasons.”

3. Why Does Italy Seem to Be Hit Particularly Hard by COVID-19?

COVID-19’s slamming Italy because of its aging population. Business Insider notes “Italy has one of the oldest populations in the world, with a median age of about 46 years old. Nearly 60% of the population is aged 40 and over, about 23% of which is over 65….” It’s also been noted in scientific research that “Italy [has shown] a higher influenza attributable excess mortality compared to other European countries. especially in the elderly.”

4. How Does Italy’s COVID-19 Outbreak Compare to Other Countries’?

According to worldometer, which keeps track of various international statistics, Italy has the second most COVID-19 cases out of all the other affected countries—as of March 10, there are 10,149 total cases in Italy and 80,761 in China. Italy has a far more significant number of new deaths, however, with 168 in the last 24 hours. China, in comparison, had 17. 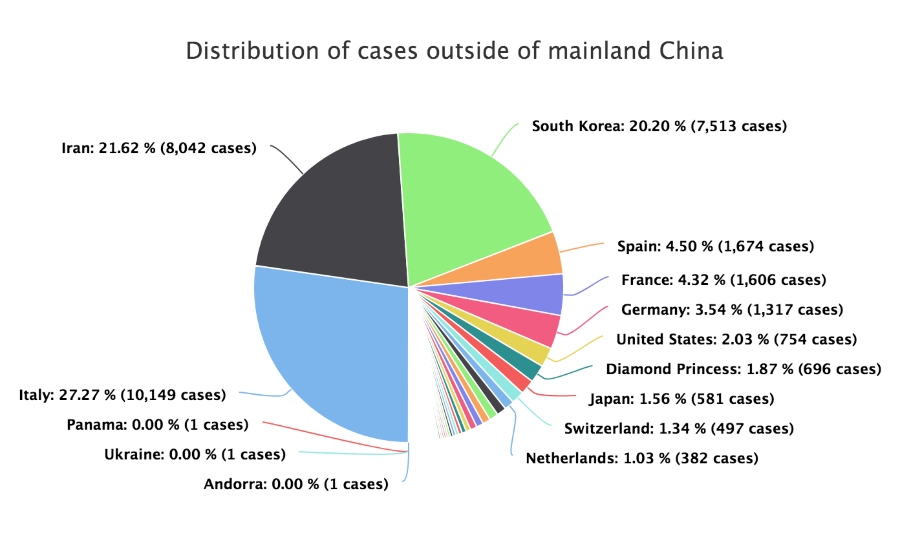 5. What Has Been The Italians’ Response to the Quarantine?

It is, of course, difficult to get a consensus on Italy’s mood, but there was an /AskReddit thread created to ask Italians for insight into their current day-to-day lives. In summary, it seems social life has taken a big hit, but work life continues on. At least, except in the places that have been affected by COVID-19 the most (such as Bologna). Italians moving around need to carry papers validating their reasons for being out, but apparently anybody can print out the papers and they do not need to be verified.

This old man from Italy said people didn't even panic that much during World war II than it is now with coronavirus 😂😂 #COVID19https://t.co/mAzpQ3urAO

6. Will The Situation Probably Become Worse or Improve?

It’s obviously impossible to say whether the situation in Italy will improve or worsen. However, good signs coming out of China. Global News reports states there is “optimism in China, where thousands of recovered patients were going home… [and that] the count of new virus cases dropped again Tuesday, with just 125 new cases after a six-week low of 202 a day earlier.” The number of new daily cases in South Korea has also diminished greatly according to worldometer.

7. How Is The Testing/Medical Situation in Italy?

The Independent put out a recent report quoting Italian doctors, including critical care experts from the University of Milan, as saying that Italian hospitals, as well as those in the United Kingdom, need to gear up for a lot more incoming patients. The doctors said in a note to the European Society of Intensive Care Medicine that ten percent of COVID-19 patients will need intensive care. According to The Guardian, doctors worry about stress on the country’s healthcare system from treating COVID-19 cases, and concerns over hospital bed availability, especially in places like Lombardy.

Italian doctors celebrate one small victory against the virus after Patient No. 1 was moved out of intensive care. But in the rest of hard-hit Lombardy, doctors are talking about having to choose who gets the limited number of ICU beds. By @nwinfield. https://t.co/jAKrq00n5T

8. When Will Italy Life the Quarantine?

As of March 10, Italy’s likely to lift the quarantine in early April. A report in Quartz, a global news outlet, notes Conte’s decree will last until April 3. There doesn’t seem to be any link between that date and the resumption of sporting events, but BBC News does note that schools and universities will reopen on April 3.

9. What Can People Outside of Italy Do to Help?

As it seems is always the case, the best thing people can do is provide monetary injections into the country. For example, Revealed Rome says that even planning trips to Italy—not going right now, just planning—can help to give it some economic stimulation. After all, the country is quite reliant on tourism. People can also consider purchasing food, books, and art made in Italy online, or donating to one of the country’s many cultural heritage foundations.