Bound to accompany any conversation about the films of Wes Anderson are questions concerning the contents of the man’s heart. Tethered firmly to quarrels over style and substance or irony and earnestness, and the custody battles for any one of his pictures waged between each star-crossed pair, musings on how Anderson must feel about the habitually cynical world he seems to invest such humanity in creating have become a ritual component in watching and discussing his work.

On the one hand, no one would claim that Anderson’s reputation was founded on warmth. Considering any entry from his first 10 years as a feature director, I’m inclined to quote Ferris Bueller describing the home of his friend Cameron’s family: “It’s very beautiful, and very cold, and you’re not allowed to touch anything.” You might say this was the appeal of Anderson during his Rushmore and Royal Tenenbaums era—that bemusing tightrope walk between not only style and substance or irony and earnestness, but invitation and alienation. And just as emphatically as it was welcomed was such, after none too long, the meat of the indictments lodged at The Life Aquatic with Steve Zissou and The Darjeeling Limited.But on the other, we got Fantastic Mr. Fox, the first of three Anderson movies to betray a softer side fans had been clawing for since Bottle Rocket. Still, mind you, not quite what you’d call warmth. In fact, it’s that suspension that makes Fantastic Mr. Fox pack such an emotional wallop. Anderson may well be a fox—as the film’s titular hero puts it, a wild animal: sly, cagey, charismatic, and contentious. What he’s not, then—almost by definition, if my years of weeping through repeated home video viewings of Disney’s early ’80s classic have taught me—is a dog.

Anderson’s in-road to Isle of Dogs, his first animated venture since breaching the medium in 2009, was no doubt the world he could build around his four-legged adventurers. Make that worlds, as the film takes great joy in imagining not only its eponymous fantasy land—a miles-long trash-heap upon which the pooches of Japan are imprisoned following reports of an outbreak of “dog flu”—but the human realm that would place them there. Each creation is the stuff of spectacle; Dog Island is a multi-tiered hellscape whose dangers, beauties, and peculiarities vary and augment with every passing chapter in the journeys of gruff stray Chief (Bryan Cranston) and his faithful pack (Edward Norton, Bill Murray, Jeff Goldblum, and Bob Balaban). Just a small stretch of Pacific away, a post-2018 Japan is rife with political scandal and high-concept cover-ups, lain out through a medley of different kinds of animation—all striking.

Burrowing deeper into these worlds at large, we find an element for which Anderson does not show off the same intimate understanding: their characters. Scattered about Dog Island are members of a species for which Anderson doesn’t have quite the empathy as he does foxes, or European hoteliers, or disaffected children. Anderson aims to write dogs the way any of us would imagine them: sincere, compassionate, and even in the direst of circumstances, unfettered of human cynicism. But when Wes tries to speak canine, the scales tip away from earnest and substantial; we’re left to wonder: what does he—or, more appropriately, his movie—feel about these big-hearted mutts? 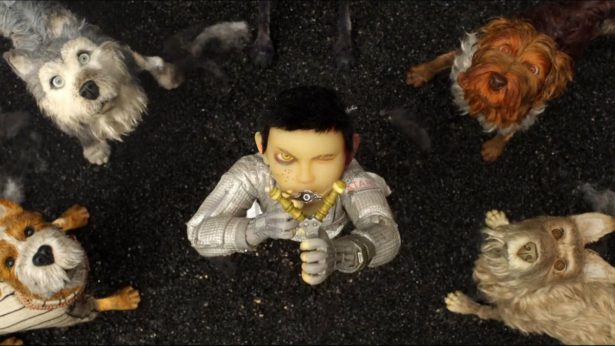 The conflict inherent in this quandary multiples on the other side of the ocean. The most vexing choice Isle of Dogs makes is not to supply any of its Japanese-speaking characters with subtitles, translating only by way of exposition-happy bilingual characters in earshot. At first, this can be forgiven as a means to keep the viewer housed solely inside the perspectives of the protagonist pups; as English-speaking humans begin to fill out the cast, the choice becomes ever the more curious.

The film’s detachment from all but the aesthetics of a dog-inhabited island may not ring especially obscene by and large, but its refusal to properly bridge the gap between its audience and the denizens of its fictionalized Japan—especially the 12-year-old Atari (first timer Koyu Rankin), who travels to dog island to rescue his banished best friend (Liev Schreiber)—shoulders heftier weight. Motivations rooted in style do, as has been said of Anderson’s work in the past, alienate from the substance. Here, the victim is not just the storytelling, but the representation of the Japanese characters onscreen, none of whom are permitted to communicate on their own behalves, and thusly might feel as if they’re not left to communicating much at all.

Perilously, Isle of Dogs‘ distance from its heroes, four- and two-legged alike, may even distract from some of its genuine delights: dazzling cityscapes, rhythmic action sequences and montages, and plenty of laughs from a rumor-obsessed Jeff Goldblum. These joys won’t be soured altogether, to be sure, but they indeed may feel further and further away as the film drives on. Unable to find the magic line between beauty and temperament or irony and earnestness, the scale tips away from humanity—and dogmanity—and ends up lacking the Wes Anderson heart that we’re likewise puzzled by and endlessly yearning for.

Editor’s note: Nerdist saw Isle of Dogs as part of a trip paid for by Fox Searchlight.