Is Lovecraftesque the RPG Most Loyal to HPL's Vision? - Nerdist

Is Lovecraftesque the RPG Most Loyal to HPL’s Vision? 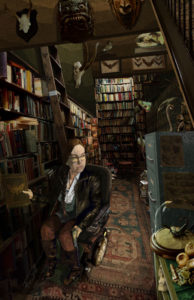 Lovecraftesque is a RPG in which a single character discovers mind-blasting secrets beyond all mortal ken, and may be the most faithful RPG to Lovecraft’s original vision.

The Cthulhu Mythos has proven to be an immensely fertile ground for gaming. From the classic Call of Cthulhu to the sleek, 21st century design of Trail of Cthulhu, with the conspiracies of Delta Green and the machine gun rattle of Achtung! Cthulhu in between, one would think this field finally exhausted. However, gaming greats Becky Annison and Joshua Fox have managed to find an angle which no other Lovecraftian RPGs have yet attempted.

“Lovecraftesque is different from other games in the Mythos because it is designed to allow you to create Lovecraftian story rather than run a party adventure with a Lovecraftian theme,” Co-creator Becky Annison said. “This game should feel like you are creating one of his unpublished stories.”

Every other Cthulhu game pits a team of investigators against the slobbering and beautiful monsters of the Mythos, yet this dramatic group-based formula is almost never seen in HP Lovecraft’s fiction. (The notable exception, The Dunwich Horror, does pit a team of investigators against Yog-Sothoth.) Instead, Lovecraft’s stories almost always feature single characters venturing out alone to face the unknown.

The narrator of Shadow Over Innsmouth must escape that dreary and doomed town alone. Albert Wilmarth is alone when he hears The Whisperer in Darkness. Dr. Willett alone discovers the fate of Charles Dexter Ward.

Yet most role-playing games are played by more than two players. What’s a designer who wants to be faithful to Lovecraft to do?

The game has a traditional character at its center, and a Narrator who is similar to a GM. Other players are Watchers, who support the Narrator by adding details and clues to a scene. To keep everyone engaged, the roles rotate scene by scene. Creating your own monster means that everyone is kept guessing about what is actually going on.

Lastly, the game is structured in three phases. In the first phase, the investigator finds clues which could be supernatural, but may just as likely be mundane. In the second phase, special cards are used to introduce blatantly occult or inexplicable elements to the tale. During the third phase, the character takes a “Journey into Darkness”, at the end of which she receives a horrid revelation.

How would you feel about playing a game with just one character? Let us know below!