Interview: Asteroid Base Talks Lovers In a Dangerous Spacetime - Nerdist

Interview: Asteroid Base Talks Lovers In a Dangerous Spacetime

Seeing two genres mesh together into one sweet union is something that’s a little uncommon with today’s games. That’s what makes something like Asteroid Base’s Lovers In a Dangerous Spacetime such a treat. It combines the strategy of managing a base with the thrill of shooting, as you guide two would-be heroes around a small space station, activating various defenses to destroy incoming enemies and obstacles.

With a quirky art style and unique gameplay, Lovers promises to be one of the more original additions to Microsoft’s [email protected] line-up for Xbox One. (It will release for PC and Mac as well.) To get more insight behind the game, we sat down with one of the studio’s co-founders, Jamie Tucker, who was more than happy to share the Love with us.

This looks like a unique mixture of strategy and shooting action. How does Lovers In a Dangerous Spacetime work?

You play as a crew of two in a woefully understaffed spaceship. We tried to make the critical actions in the game simple, so that pretty much anyone can jump onto the couch and have a fun time. You and your partner control the functions of the ship by running and jumping your Lover (League of Very Empathetic Rescue Spacenauts) between the different stations. You can shoot enemies from the Turret station, protect the ship from bombs from the Shield station, and explore the galaxy from the Engine station. Imagine it like that scene from Star Wars, where Han and Luke have to run to the turrets on the Millennium Falcon to fire at the incoming TIE fighters. The real strategy and challenge arises when you’re surrounded and you have to decide who’s going do what, are you going to be defensive? Are you going make a stand, guns blazing? Or are you going to try to flee to a safer place to love again?

Would you say the game is more recommended for co-op play with two people? Or does it still operate smoothly enough for single player?

Well, the core draw for Lovers definitely is that it was designed to be a co-op game from the start, and we really tried to emphasize in the gameplay with the fact that you have to be able to effectively work together. That being said, your ‘partner’ doesn’t exactly have to be a real person. So with that in mind, for the single player experience, we created an AI space-pet companion (a dog named Doppler or a cat named Kepler) to help you through your campaigns. The space-pet can do everything on the spaceship a normal player can do, except fly it—because why would any responsible pet owner let a dog fly a spaceship? As the player though, you have still give the order and tell the dog or cat what to do. To compensate for this, we tried to make the space-pet a little quicker than a player could be. In testing the game, we actually heard one of our players yell at her friend, “I wish you were the dog!” after their ship exploded into a colorful shower of particles. 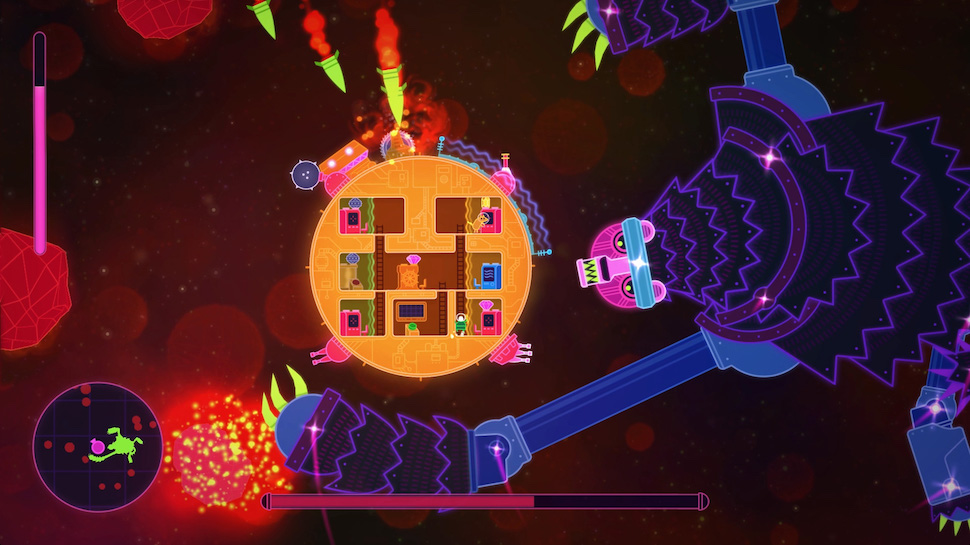 Where did the team come up with the awesome retro-based game design?

I guess you could say that the retro-based game design came from the fact that we wanted to make an exciting co-op game with simple but deep gameplay like an old arcade game. When we came up with the premise of the players controlling the ship through the separate stations, we wanted to be able to break down each element to be as direct as possible. You can look at what’s going on inside the ship like Jumpman and everything that’s going on outside the ship like Asteroids or Space Zap, balancing them together and adding a partner to play with starts to add a lot of complexity and strategy. What’s really cool is that all of this has come full-circle now as we have seen a couple people building custom Lovers in a Dangerous Spacetime arcade cabinets in anticipation for the game’s release. My guess is that it seems to have resonated with them because of these design choices we made.

There are other objectives in the game as well, including the ability to “rescue kidnapped space bunnies.” How’s that work?

Lovers is divided up into four campaigns that are each based on a constellation, starting with Ursa Major. Each campaign is divided into four levels plus a boss fight where you have to battle that constellation – the first boss is a giant robotic bear! To progress through each level you have to explore and rescue captured space-bunnies, who will then use their cosmic love powers to unlock the heart-warp exit—it’s all very scientific. Each level is procedurally generated from its own recipe of tile sets; we’re working from the theory of parallel dangerous spacetimes, so each time you replay a level, it is remixed and feels fresh.

Tell us about the game customization. What all can you do with your ship in the game?

We have 3 different ship layouts that you can unlock: the Gumball Zero, the Banana Split, and the Jelly Roll. Each ship plays with the co-op mechanics, mainly adding and extra layer of challenge to the game. The Banana Split, for example, sections off the ship into halves—à la that I Love Lucy episode—where you can only use the stations on your side of the ship. It’s a good ship to play if you like to bicker. Then we also have the fact that ship’s devices themselves are customizable. As you play through a campaign you collect gems that are delivered as little presents. We have three base gem types: Power, Beam and Metal, and each react differently depending on the station you socket them into. For example, throwing a Power gem onto the Engine station gives you jet boosts and makes the ship faster, whereas throwing it onto a Turret upgrades it with another gun barrel, improving your rate of fire. The real fun comes when you have eventually unlocked multiple gem slots and you can combine the gems onto a single station. How does a spiked metal flail that shoots laser beams sound?

Lovers of a Dangerous Spacetime will release later this year for Xbox One, Steam and Mac platforms.