Inside the Attack on Titan Escape Room - Nerdist

Inside the Attack on Titan Escape Room

The anxiety was mounting. Elephantine footsteps sounded steadily, like war drums on the approach. It was hard to tell if the temperature was actually climbing, or if the sweat on my brow was due merely to rising anxiety. We squinted at the portraits on the wall again, looking from every conceivable angle, furtively searching for some clue–any clue–that we somehow just weren’t seeing.

It was only a matter of minutes before the Titans would be upon us.

This was a memorable moment towards the end of my experience in “Castle Under Siege,” an Attack on Titan-themed challenge at Real Escape Game in L.A.’s Little Tokyo quarter. My friends and I assumed the role of a support crew, scrambling around to unlock hidden cubbies and get weapons along to Mikasa, Eren, and other daring heroes from the anime. After deciphering enough puzzles and applying a fair amount of elbow grease, we even gained access to some tools that let us to bring the fight straight to the relentless Titans.

Putting our ten heads together, we eventually managed to repel the attack–with only a scant 30 seconds to spare. 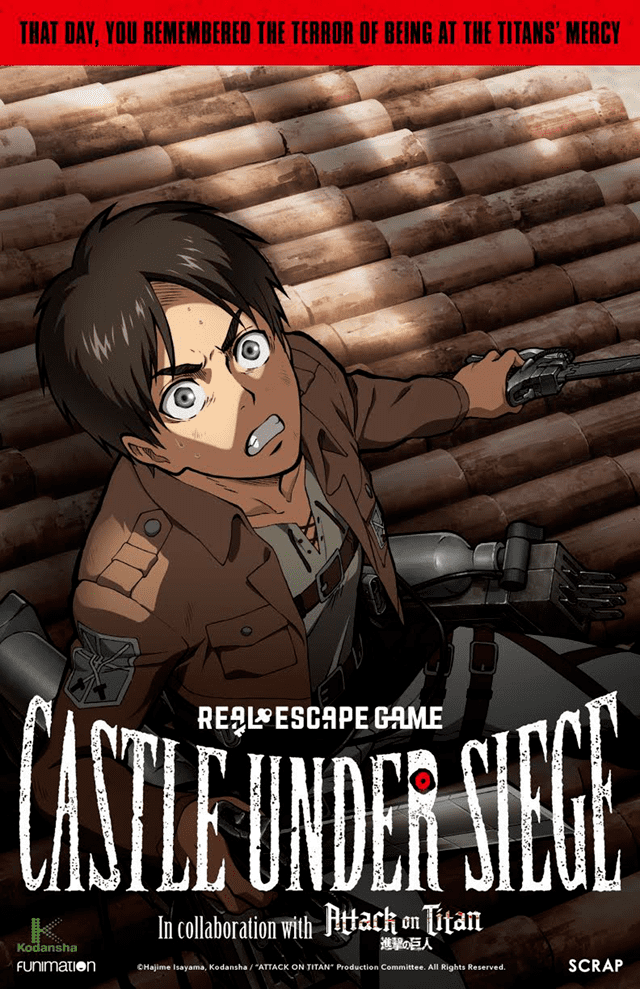 All throughout this hour-long challenge, it was hard not imagine staffers snickering through hidden cameras at our often-bumbling efforts. Of course, we did have a gracious hostess, Willa Lim, right there with us the entire time. She rolled out instructions when we progressed through levels, teased hints if we reached a roadblock, and gently reminded us of the rules whenever we almost broke a prop we were expressly told not to touch. Willa is also the manager of Real Escape Game L.A. She’d been there for many other parties prior to our visit so, after the Titans had been vanquished, I was curious to pick her brain about how we might’ve handled the challenges better.

“A common pitfall is when people doubt themselves. Often times they’ll have an answer, but are so unsure that their teammates brush them off. It’s sad to see, because I just want them to have more confidence!” Willa said. “One of my favorites is when people try to befriend the Titans. If you’ve read the manga or seen the anime, you can imagine how that tactic works out…”

True, trying to build bridges with giant, skinless monsters with a penchant for biting off heads probably isn’t advisable. It’d been a while since I’d re-watched the show, though. Had I forgotten any details that would’ve clinched a faster win for us? “[Attack on Titan] fans will definitely appreciate the quirks and immersion of the room, but they wouldn’t have an advantage… the quiz from ‘Escape from the Walled City’–our previous stadium-size escape game in collaboration with Attack on Titan–is still available online [though]. It gives you a great chance to try some puzzles while under just a bit of time pressure.”

What strategies work best then when you’re in the escape room, and there’s more than bit of pressure on? “Communication and delegation are usually what separates the escapees and, in this specific room, the Titan Fodder,” Willa said. “There have been lots of times where people just repeat things someone else has done, or too many people focus on one particular puzzle… it becomes a significant time waster.”

Will you journey to Little Tokyo to get in this escape room? Or would you kill for “Castle Under Siege” to swing into your town? Sound off in the comments.