The Ending of Netflix’s IN THE TALL GRASS Explained

Warning: This post contains major spoilers for Netflix’s In the Tall Grass, so if you want to avoid them get lost like a tennis ball in…..well, we bet you can finish this joke on your own.

Netflix’s In the Tall Grass greatly expands the mythology of the 2012 short story co-written by Stephen King and his son Joe Hill–about a brother and his pregnant sister who get lost in a grassy field–yet it doesn’t give up all of its secrets easily. The unsettling horror of the grass, where time is cyclical, the dead don’t stay that way for long, and an unearthly rock offers dark insights into this world and beyond, makes for a confusing labyrinth. But the movie does share enough to understand the ending, when a character named Travis helps the other trapped characters escape its clutches. It’s a moment of sacrifice and redemption that not only saves his ex-girlfriend Becky and their baby, but his eternal soul.

Patrick Wilson’s plays Ross, another man lost in the grass with his family, who has fallen under the field’s mystical spell. He says that the mysterious, unearthly rock in the middle of the field was located not just in the center of the U.S., but the “center of the center,”seemingly the nexus of the universe itself. Touching it gives him the ability to see and know things no one else could, and he talks about how its wisdom brought everyone together. “All it’s asking for is a little faith,” he say, “And you will be redeemed – all your sins, your trespasses will melt away.” But what he learned from the rock turned him into a monster, because that rock was the Devil’s version of the Tree of the Knowledge of Good and Evil in the Garden of Eden. 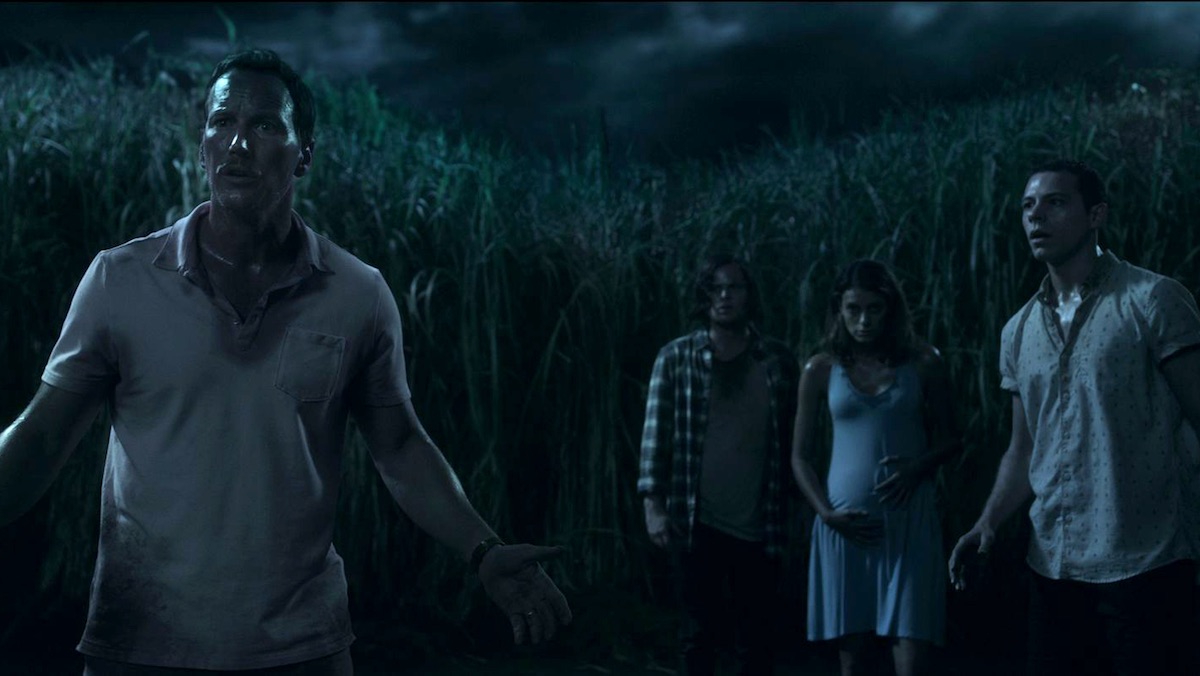 In the Biblical Paradise, eating the tree’s fruit gave Adam and Eve wisdom but led to their banishment forever. “Eating” the rock’s knowledge trapped Ross there forever without his humanity, in a place he calls “The Garden of Forking Paths.”

Tobin, Ross’s young son, warns Travis–who wanders into the grass after stumbling on Becky and her brother’s car in a nearby parking lot–of that same fate after he kills Ross, but Travis touches it anyway. Why he does so is up for debate. Did Travis believe Ross when he told him the rock would redeem him? Was it a desperate attempt to discover a path out? Was he tempted by it after taking another person’s life? Whatever the reason, when he did place his hand on the rock, it connected him with the underworld that gave the grass its dark power, as red light–resembling the blood that had been spilled on its soil for so long–emanated out.

But unlike Ross, who continued to feed the evil–murdering again and again and even feeding Becky her newborn baby–Travis uses his powers for good. He knows Tobin was right, he could never leave the grass after touching the rock, but the others still have a chance to escape its clutches. “I’m not leaving, but you… you don’t belong here, and neither does Becky,” Travis says, “Don’t let them in.” 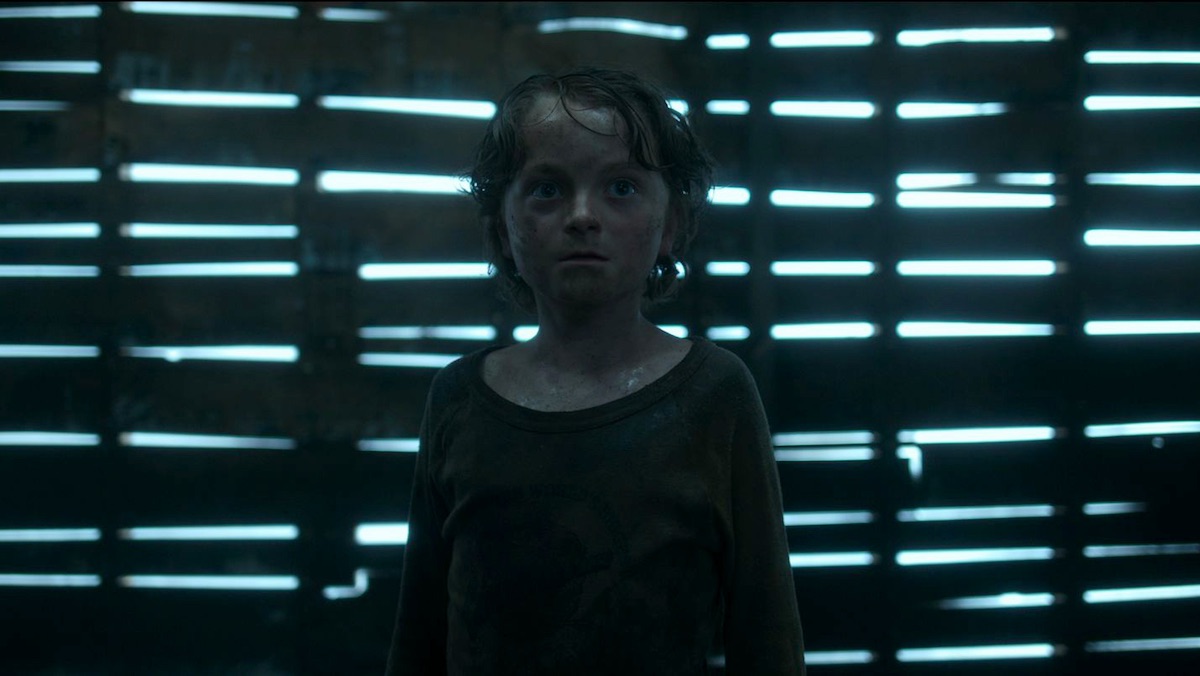 Whatever “wisdom” the rock gave Travis allows him to send Tobin out, back to the church on the side of the road. There, Tobin is able to warn Becky and Cal to ignore a past Tobin’s cries from the grass. He stops them from ever entering the grass by showing Becky the charm Travis gave him, after Travis took it from a dead Becky earlier. The non-linear nature of time in the grass makes it so everything is happening at once, and since those trapped in it are reborn again and again, it gives Becky a chance to take a different path entirely. This time she chooses to turn around and go home to raise her baby with her family.

Travis is also saved, even though he dies. We see the fate of those who succumbed to the rock’s evil when Becky gives birth in front of it. The ground opens, and it’s revealed those damned souls were absorbed into its roots where they were made to suffer for eternity. They will never escape the grass. They were not redeemed. 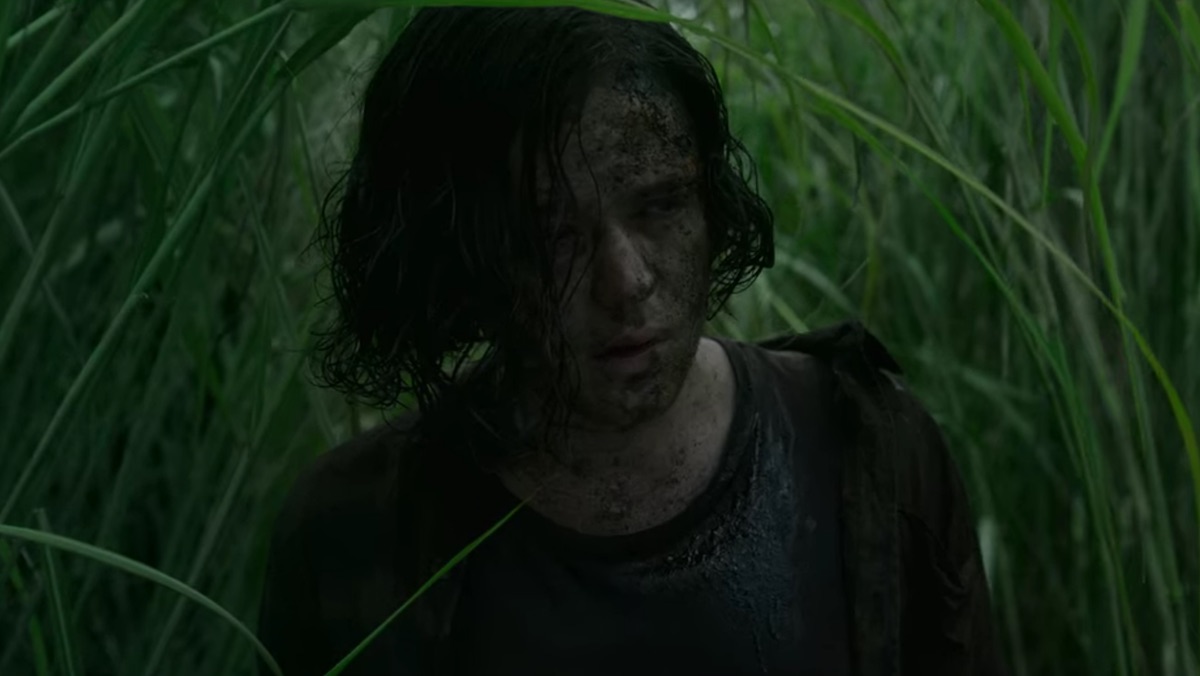 But the man who willingly stayed behind to save his unborn child atoned for his sins was, and as he closed his eyes for the final time he looked skyward, to a beautiful blue and infinite bliss. He chose the right path and escaped the grass forever.