IN FABRIC Clip Shows Us the Creepy Cult of Shopping - Nerdist

IN FABRIC Clip Shows Us the Creepy Cult of Shopping

If anybody tried to brave the hordes of underslept humans with money to burn on Black Friday, you know what a horror show a sale can be. Especially during the holiday season. Sure, you can probably buy most everything you need online, but where’s the fun in that? Who doesn’t like standing outside in the cold for hours before a store even opens? You might trample someone, or catch an elbow to the eye, but you could buy something for significantly less than you think it should cost. This weird, macabre ecstasy is in full display in Peter Strickland’s new film, In Fabric.

In the movie, a mysterious department store has a holiday sale. Sounds pretty boring, but it’s not. The proprietors of the shop are otherworldly, Gothic ladies and their extra wide-eyed old man boss. The film is never clear if they’re aliens or vampires or what. The main story features a particular red dress that seems imbued with evil, but even the store and employees seem sinister. And nowhere is this more evident than in the below clip. Watch the opening of this store and recoil in fear.

People will do anything for a bargain, I suppose.

Strickland’s sensibilities are on full display in In Fabric. It blends the absurd and mundane with Euro-Goth and synth-horror. A kind of ghost story, In Fabric follows a strange red dress and the suffering it causes those who own it. Marianne Jean-Baptiste plays a newly divorced mother of a college-age son. She buys the dress to add some spice to her flagging dating life, and while the store clerk (Fatma Mohamed) says the dress is “made” for her, it brings her nothing but injury and bad luck. But is the dress evil on its own? Because of the woman who first wore it? Or is it the store itself? 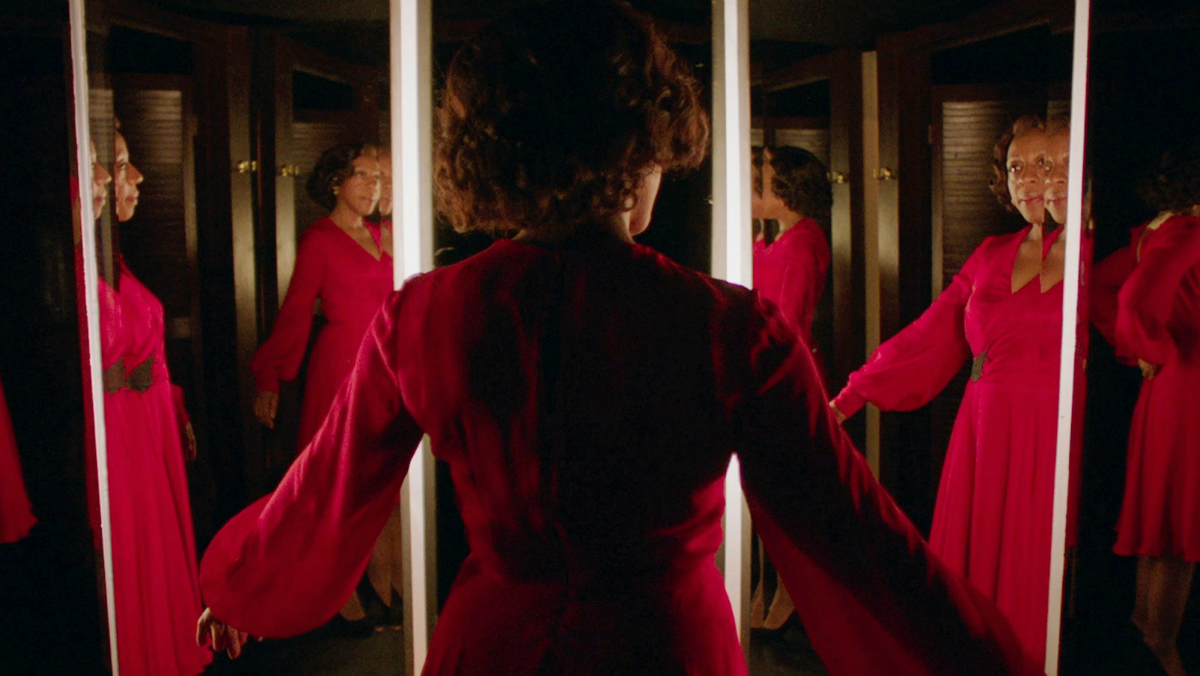 In Fabric comes to VOD Tuesday, December 10. It’s really one of the more interesting movies I’ve seen in the past year. It’s a movie that’s less about what’s literally happening and more about what the audience intuits from the bombardment of images and sound. Amid the satire of everyday monotony, it adds terror and dread that I still can’t fully comprehend. Plus, yes, it’s about a killer dress that may or may not be from Hell itself. I mean, what more do you need?