In Defense of Tower Defense Games

I have a confession to make, which if you’re a big fan of tower defense games like Pixel Junk Monsters or Kingdom Rush you’re probably not going to like it very much.

For those of you not in the know, tower defense games are generally real-time-strategy games with a element of defending your tower/castle/position on a map.  There’s a gradual increase of attacks as the game moves forward, and as you advance past each new wave you gain points, abilities, power-ups and a sense of smug satisfaction if you’re really good. 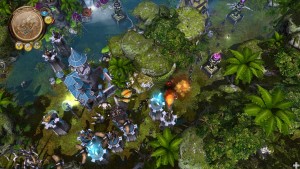 As a card carrying member of the first generation in history to experience repetitive stress injuries from one too many marathon button mashing sessions (called Nintendo-thumb in some circles) I’ve always ever been more of an action/shooter kind of gamer. And not just in a passive preference sense, but to the point of being almost stubborn about it. Tower defense games, strategy, and turn-based games?  Not for me.

The closest I ever got to what I saw as “kinna boring” was in the early 90’s when I dabbled in the more story intensive adventure games from Lucas Arts like Sam and Max, Full Throttle, and Monkey Island, but for the most part, since the dawn of my game playing career, I’ve always wanted the feel of a virtual BFG in my hands.  Give me a chainsaw attached to a grenade launcher attached to a laser light sword any day over, well, anything that involved making preparations for something to attack me while I sit and wait, and possibly eat a sandwich.

Tower defense games to me were always about thinking, and waiting and strategy. You know. Boring stuff. You’ve got to think ahead twenty moves to get one tiny result and even then you might still end up losing. That never sat well with me because I’m the gamer that runs into the middle of a firefight on Modern Warfare with absolutely 0% sense of self-preservation just to see how many enemies I can pick off before I die. Sometimes, on those very lucky and most magical of days, I survive unscathed, feeling as though the video game gods, (among them number Nolan Bushnell, Peter Molyneux, and Toru Iwatani) are shining down on me.

But then one day a strange thing happened. It was kind of sneaky if we’re going to be really honest. I stumbled across a game that a friend recommended and decided to try it. I played it for a few minutes, then a few hours, and then for weeks and months. I couldn’t get enough of it. The game? Plants vs. Zombies. You may have heard of it. I was enjoying it thoroughly until another friend saw me playing it and spoke those fateful words that I will never forget.

I scrambled to the Internet and did an exhaustive search. Sure enough Plants vs Zombies numbered as one of many tower defense games that actually went beyond your standard set up, while waiting of your inevitable end.

It was fun, it was engaging, and I was having a blast.

Soon after I found a few other games that while considered tower defense games, actually evolved the sub genre a stretch. These were games like Sanctum 2, and Orcs Must Die! 2, taking the best elements of tower defense and blending them with other sub-genres to create games that are greater than the sum of their respective parts.

And thus, with much crow consumed I had to finally admit. Tower defense games. You’re not so bad.

And really, when you think about it, tower defense can’t be all terrible if the best parts of The Two Towers and Return of the King involved these elements, and Doctor Who has an entire sub-genre devoted to its….errrr….tenets (slight pun intended.) There’s just something satisfying about it on a visceral level. It’s in our human nature. It’s in our DNA.

You’d do well to give some of these games a try and see what you’re missing if you haven’t ventured there just yet.

So here’s to you tower defense games. May you last as long as you keep out the hordes.

Now if someone could just show me why Candy Crush is so amazing.