As rough as it is to have a massive warp storm appear, even worse is what it did to the Imperium. Half of the civilized planets in the galaxy have been cut off from Holy Terra. Even worse, they can’t even see the Emperor’s Light through the Astronomicon making navigation and calls for reinforcements near impossible. The only things holding the Imperium together are a few key strategic routes through the Rift. Chief among these routes is the path that travels past the planet Vigilus. It’s long been an important world to the Imperium but now it’s of paramount importance and of course, it’s now under heavy siege.

The Imperium Nihilus: Vigilus Defiant Campaign Book is Part 1 of this growing story. It’s a 200-page tome full of background lore, new missions, and even new specialist detachments so you can step into the armored boots of the specific factions fighting on Vigilus.

Vigilus has long been a high-value planet for the Imperium, even before the opening of the Rift. Its network of massive hive-sprawls provides material and resources to the Imperium. Perhaps this is why so many factions are battling for it. Long before the Rift, a Genestealer Cult began to grow among the downtrodden and exploited of the planet. A massive Ork SpeedWaagh races between hivesprawls attacking anyone who ventures outside the great hivesprawl shields. Eldar, Drukhari, and even a growing Gellerpox Plague released by Death Guard threaten to Imperium’s hold on this critical planet.

The first part of Vigilus Defiant is deep dive into the history and structure of the planet. Vigilus is covered in hivesprawls. Hyperia Hivesprawl is the planet’s capital and thus has weathered the battles a little better than most. Oteck Hivesprawl is the primary source of water; even Orks can be strategic enough to recognize this as a primary target. Beset by Orks on the outside and a Cult Uprising on the inside, is there any hope for Oteck? This is my favorite part of the book; the lore is rich and I’ve enjoyed reading about some of the battles in this campaign. 40k is a grimdark setting but I certainly wasn’t prepared for what happened with the lords of Vigilus flooded an entire delta with petroleum fuel and sent a contingent of knights to face an Ork horde. 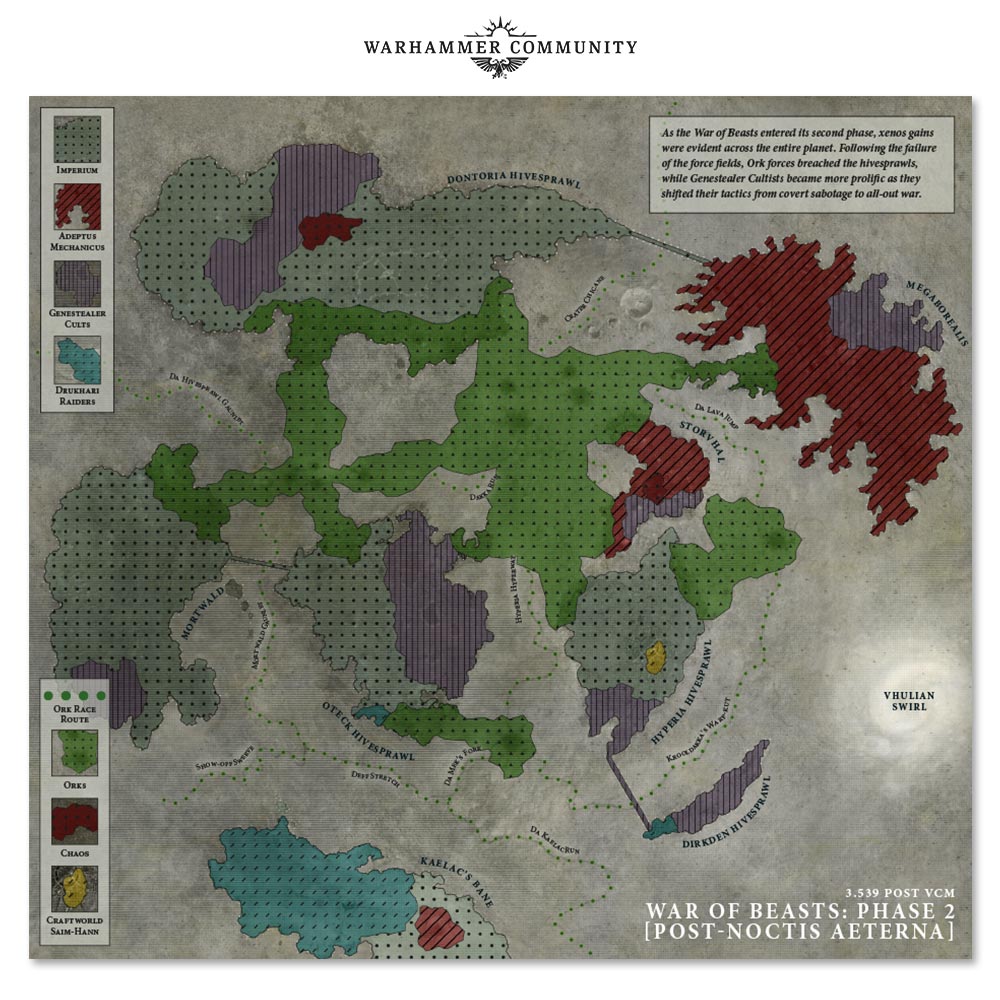 Given how important this planet is to the Imperium, it’s no surprise that Primarch Robute Guilliman has sent his best to prevent its fall. In addition to Space Wolf and Crimson Fist detachments, Guilliman has sent the Chapter Master of his own Ultramarines chapter: Marneus Calgar. He’s a long time hero of the Imperium and now he comes with even more power. The launch of 8th edition also brought Primaris marines. These super-super-soldiers are more powerful than standard Space Marines. Calgar volunteered to be the first to attempt the transition from regular Space Marine to Primaris. It killed him. For a few minutes, the world mourned his loss before his advanced pathology managed to pull him back. 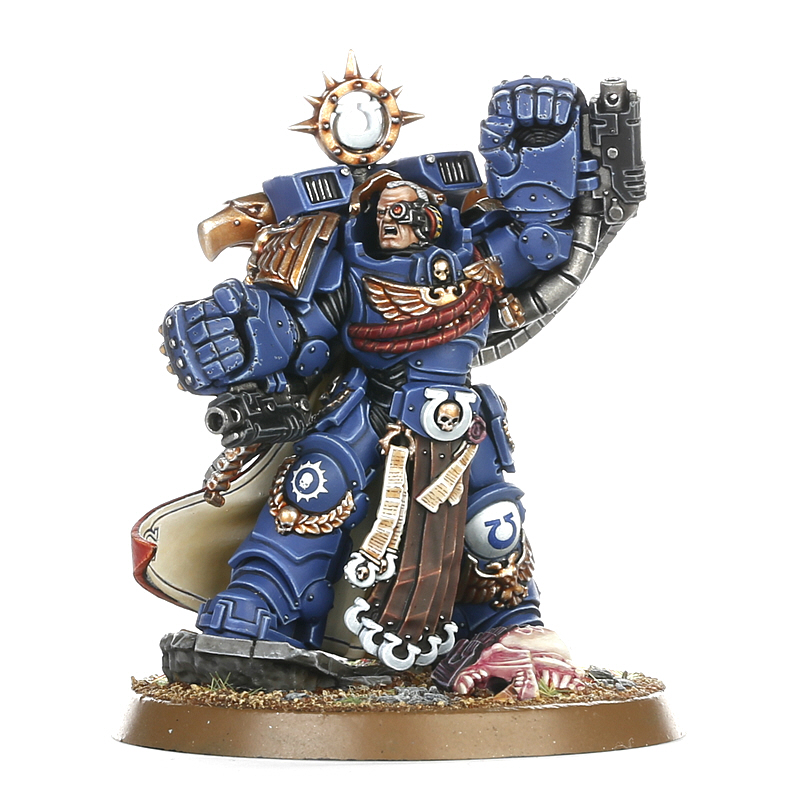 Unfortunately for Calgar, he isn’t the only “hero” on the planet. Included in January’s issue of White Dwarf magazine is a short story about a squad of Ultramarine Reavers. As they track a few Genestealer Cultists among the highest peaks of one of the hivesprawls, they break the polluted cloud barrier to find a horrific sight. Huge chaos dragons led by members of the Black Legion have begun an invasion of their own. Led by Haarken Worldclaimer, they aim to win Vigilus for Abbadon himself. Haarken thrust his spear into the ground and announced the arrival of Abbadon in 80 days. He’s never been wrong and has never failed to deliver a planet. 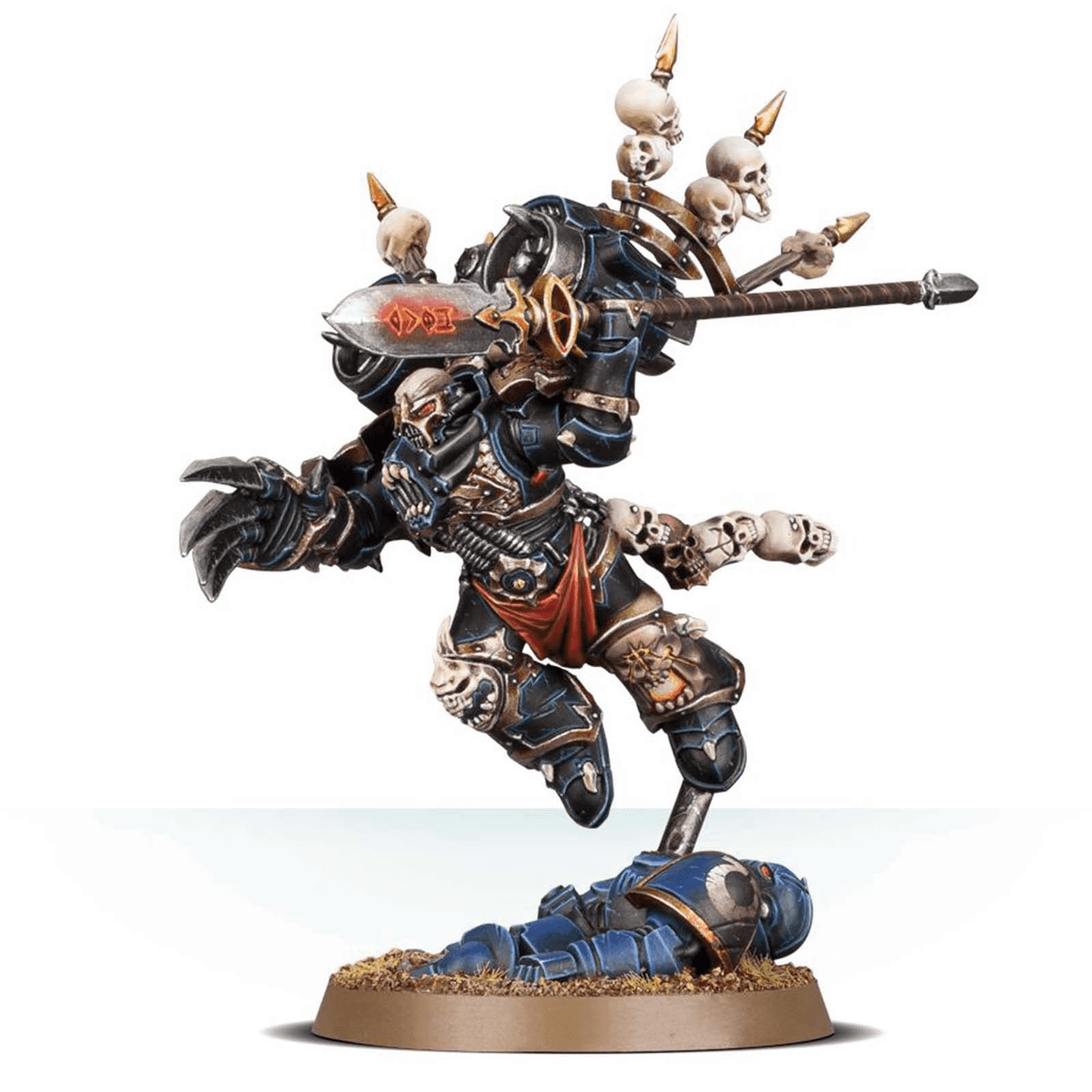 Vigilus Defiant does not only tell the story of the planet. It allows you to reenact the first phases of battle on the table. Each of the battles detailed in the lore has its own Battleplan for you to set up and play with your own armies. For those of you who own armies of the specific factions present on the planet, there are even battleplans that provide unique strategems and abilities when you run through the war on Vigilus in a campaign format.

Additionally, faction detachments give you even more unique abilities if you build a force that mirrors the forces in the war. The Kult of Speed! detachment is a specific detachment for Ork players that supercharges a detachment full of the vehicles and bikers that laid waste to vast swaths of Vigilus.

Vigilus Defiant is only Part 1 of this sprawling narrative campaign. Who will ultimately triumph in this war and will there be much of a planet left to claim? How will the arrival of Abbadon tip the scales? Could this be the beginning of a new crusade? We can’t wait to find out.