He christened his one-man studio Megaflow Graphics as an homage to the space existing between parallel worlds in iconic author Michael Moorcock’s multiverse. “I said it out loud a few times to be sure, and it did indeed roll off the tongue well, so I went with it!” The name has proven apt for an artist who works in a wide swath of multimedia. Comic books. Novels. Magazines. Video games. Interactive apps. Any product that can be licensed, really. All have featured Patrick McEvoy‘s art. He even had a multi-year stint as an exclusive artist for Marvel‘s marketing division. 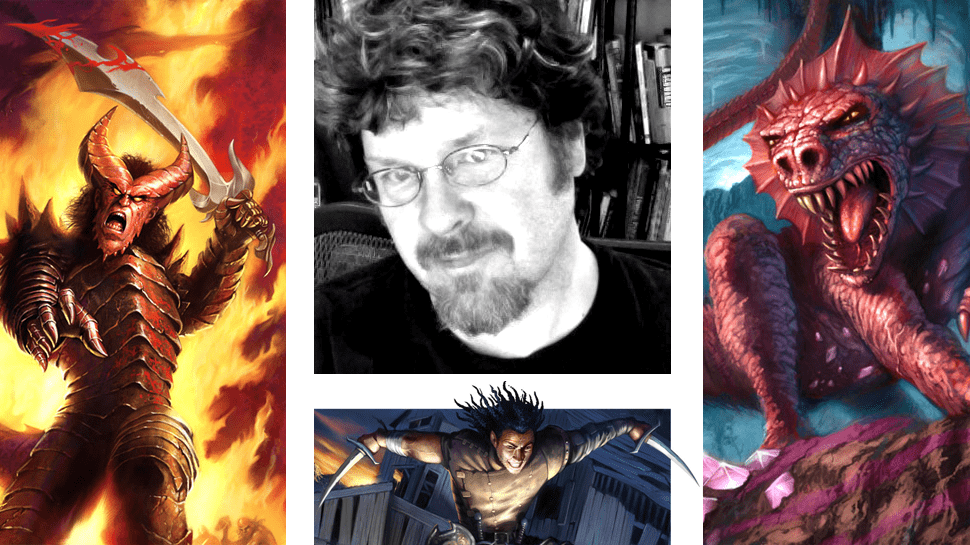 McEvoy is especially prolific in games, though, having worked with outfits like White Wolf and Fantasy Flight, and on titles like Warcraft, Game of Thrones, Vampire: the Eternal Struggle, Kingdoms of Kalamar and Arkham Horror, among others. Even the longest list of credits has to start somewhere, though. So, what drew this artist to games in the first place?

“Way back in the day, I was working as an art director for educational multimedia. One of my friends at work, an animator, decided to start up a weekly gaming group, bringing in some of his massive collection of European-style games. I had a great time playing these new and interesting games, but mostly was blown away by all the fun the artists were having creating illustrations for them.”

Many gamers aspire to work in games themselves, but the path from fan to professional can be long and winding. For McEvoy, the search bar offered a surprisingly direct bridge between the two points.
“Looking up all the companies I could find who were doing games that needed art… it so happened that there were a number of small outfits doing collectible card games. And each of them needed a lot of art!” After sending his portfolio to several companies, he received a response from Z-Man Games first. Their CCG Shadowfist featured a hodgepodge of martial arts, time travel… and monkeys. All subjects in the artist’s wheelhouse. 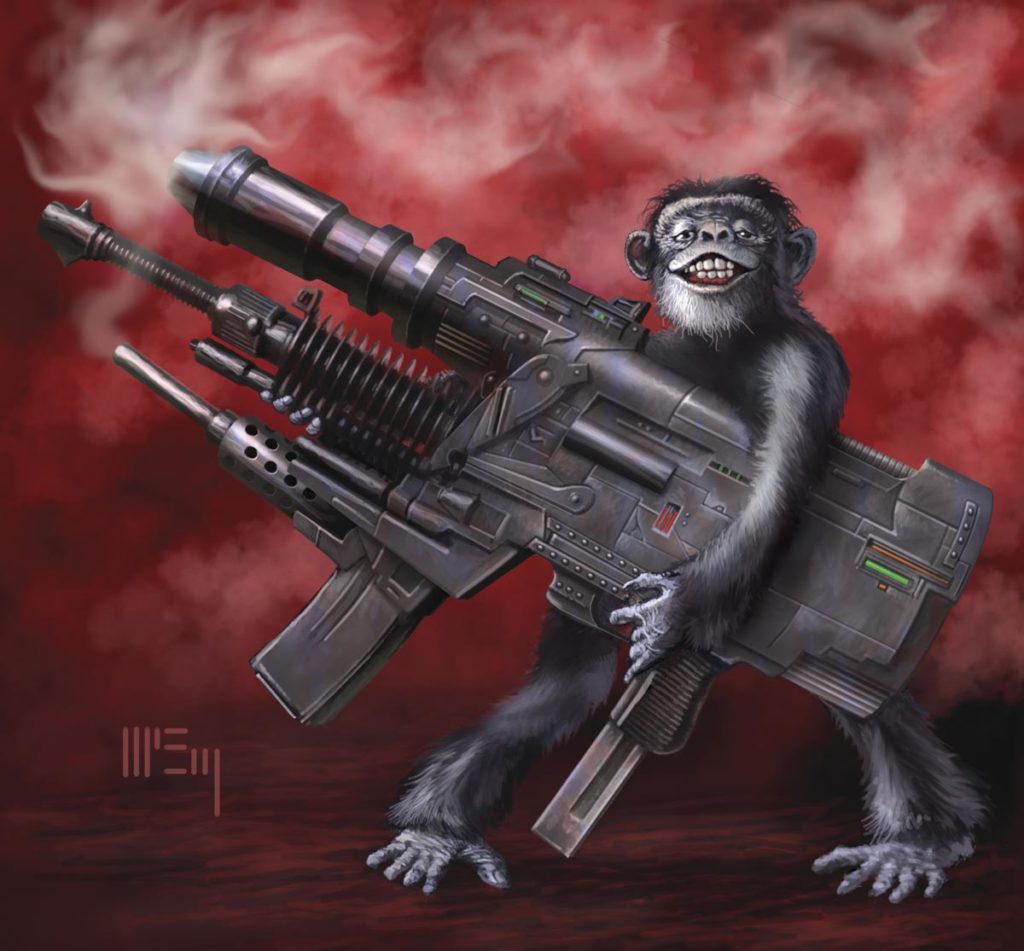 After doing a couple sets illustrations for that offbeat title, and sending more samples out, McEvoy was contacted–right out of the blue–by game makers adapting a book series that’d be far more renowned years later. “Eric Lang and Darrell Hardy from Fantasy Flight wanted me to do three limited edition cards for the Game of Thrones CCG. From there, things really took off with them. I ended up doing close to 100 cards for that game, and then a similar amount for the Call of Cthulhu CCG that came out a short time later.” Call of Cthulhu would then, of course, eventually evolve into the Arkham Horror board game.

Through these projects, McEvoy acclimated to a specific “behind-the-boards” procedure when working. “Usually, I’m in touch with the art director of a project, who’s written up descriptions of the art needed in conjunction with the game designer.” While clearly the art director’s role is to ensure a given piece for a brand is consistent with the iterations that’ve come out before it, these descriptions can also include firm specifications about size and dimensions. Sometimes, they can even get so specific as to call for individual colors that must be included or avoided. “More often than not–especially in a game with recurring characters–there will be some reference included. Some AD’s have the time to show a specific prop or location being called for but, usually, there’s some amount of reference-gathering on my end, too.” 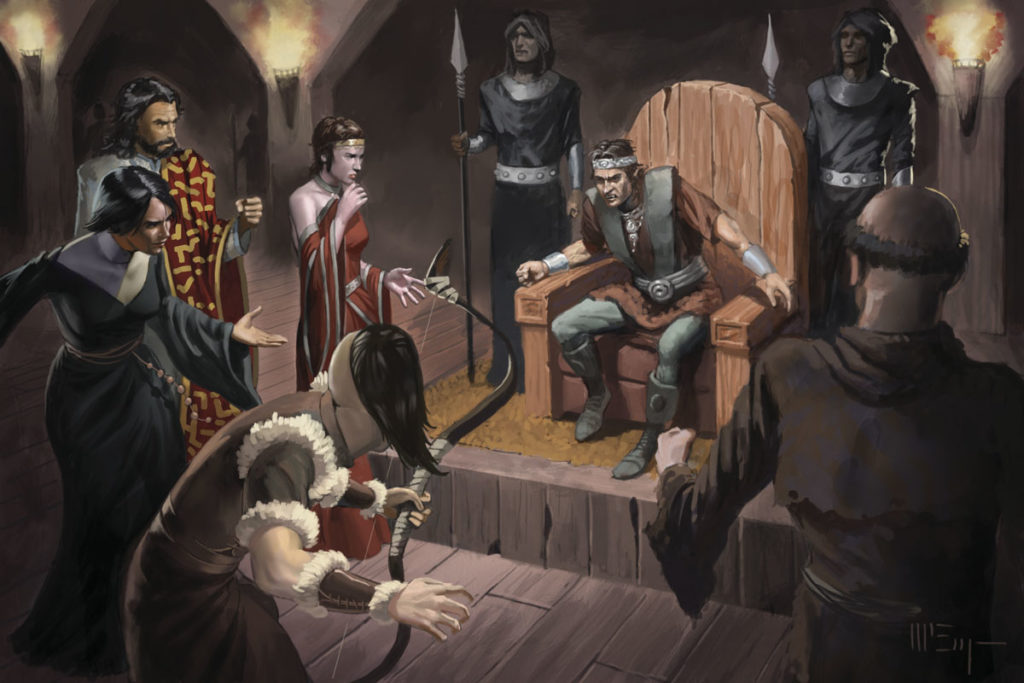 Approvals are made by the art director, even as early as the sketching stage. “For card art, or small pieces in a board game, I’ll just do one sketch each and submit those. For something like a cover, or main board art, I might provide a few different ideas and we’ll narrow down ideas from there.” Adopting digital technique early in his career has allowed for greater flexibility at more stages of the process, too. “I did do a lot of traditional media in my early illustration work, but once I started using the Wacom tablet for digital painting and drawing, I realized I could work two or three times faster, and that any changes could be made much more easily.”

McEvoy used to do everything–from layouts to rough sketches to final drawings–on paper he’d then scan in and paint over. However, he’s gradually done less and less on paper, and leaned more to digital. “Most often now, I just do the first conceptual work on paper and do everything else on the computer. Once a sketch is approved, I go straight to final art, doing the rendering on the computer–primarily in PhotoShop.” 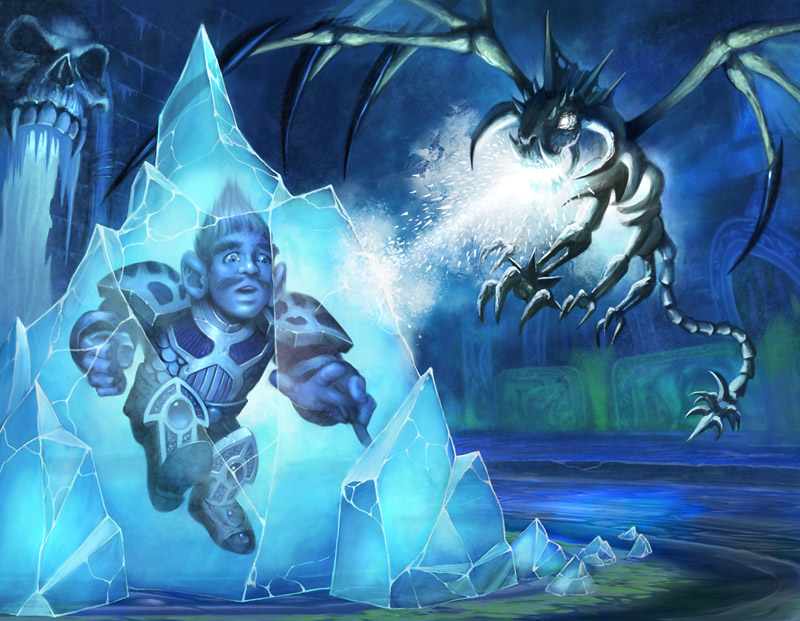 While art directors specify what’s happening in a given piece of game art–and as mentioned, they can get very particular with descriptions–McEvoy has found that zeroing in on what they don’t say can reveal room to insert his own creative ideas between the players and designers.

“If I’m doing my job right, it will illustrate something from the story in an unexpected and entertaining way. For instance, if it’s a simple picture of a single character, we could just see them standing there looking cool, but that’s horribly dull. I ask myself… can I put them in a situation where they seem to be in danger? Or are they investigating something odd? Is there some strange, dramatic thing happening ‘off-screen’ that they can be reacting to? Is there some interesting lighting, environmental color, or camera angle I can use? If a specific dramatic action is called for, what moment during that action will play up the drama or emotion to greatest effect? I ask all these questions before diving in.”

“Of course, sometimes, the AD does just want the character standing there. When that’s the case, I just do the best damn standing pose I can manage–and always try to throw interesting lighting on it.” 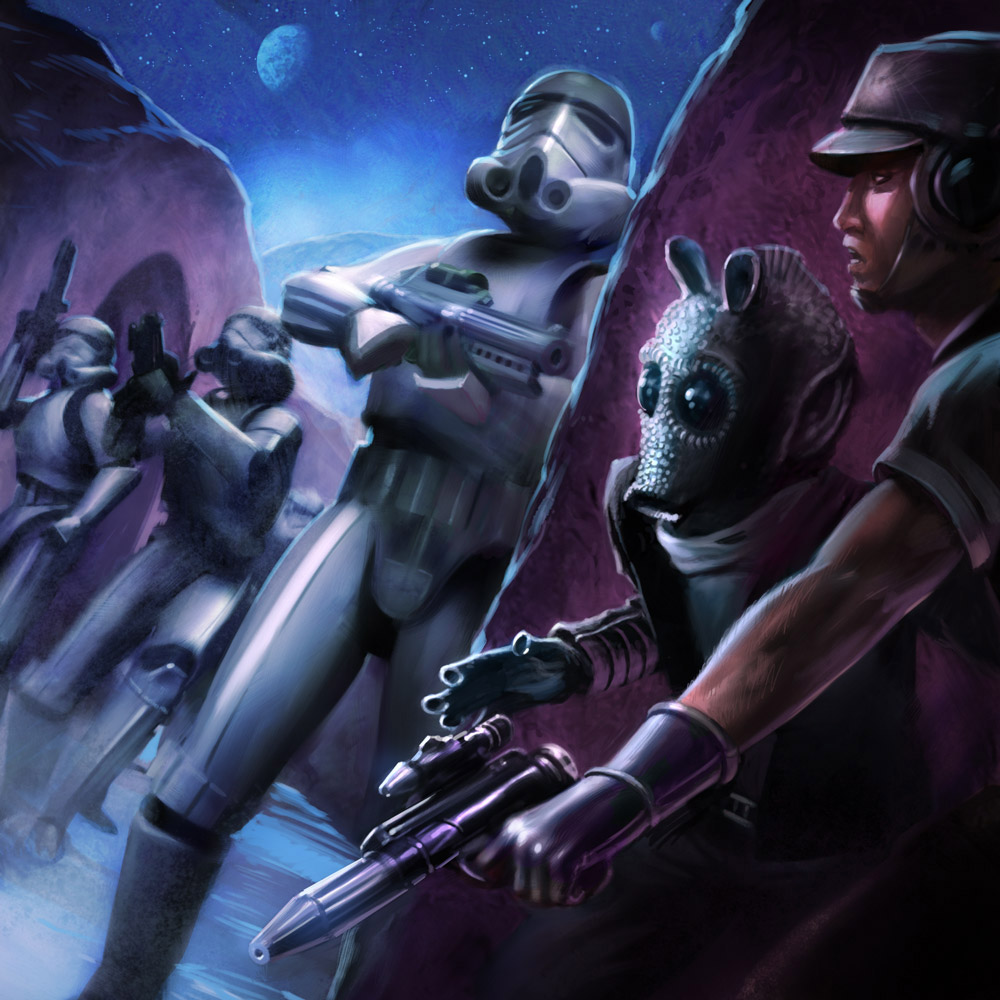 In comparison to other media he works in, McEvoy must consider how well his gaming art will “read” when re-sized down to dimensions much smaller than those he illustrated them in. Sometimes, they’ll even be shrunk down to just two inches or so. “Even if there’s a picture calling for a number of characters or complicated action, I try to concentrate on an impactful silhouette of one or two main characters if possible. With more traditional illustration in books or magazines, there’s a lot more room, and detail will add to the impact, rather than muddy things up. With comics, where I do a lot of work these days, I have the luxury of showing action over the course of several panels.” When it comes to gaming art, though, McEvoy must craft one stark image to represent a lot of potential plot for players. Balancing an image so it looks great, big or small, is a top concern.

“There are a lot of different ways to approach art for games, so I don’t want to be overly critical of any other artist’s choices. That said, my personal preference is for an easily-recognizable, impactful picture. Sometimes there’ll be a beautiful, moody piece of art that will look amazing at full size, but just comes across as muddy shapes and lights when reproduced. My very favorite gaming artists will have a good combination of unique technique and immediate punch with powerful silhouettes, color, and lighting.” 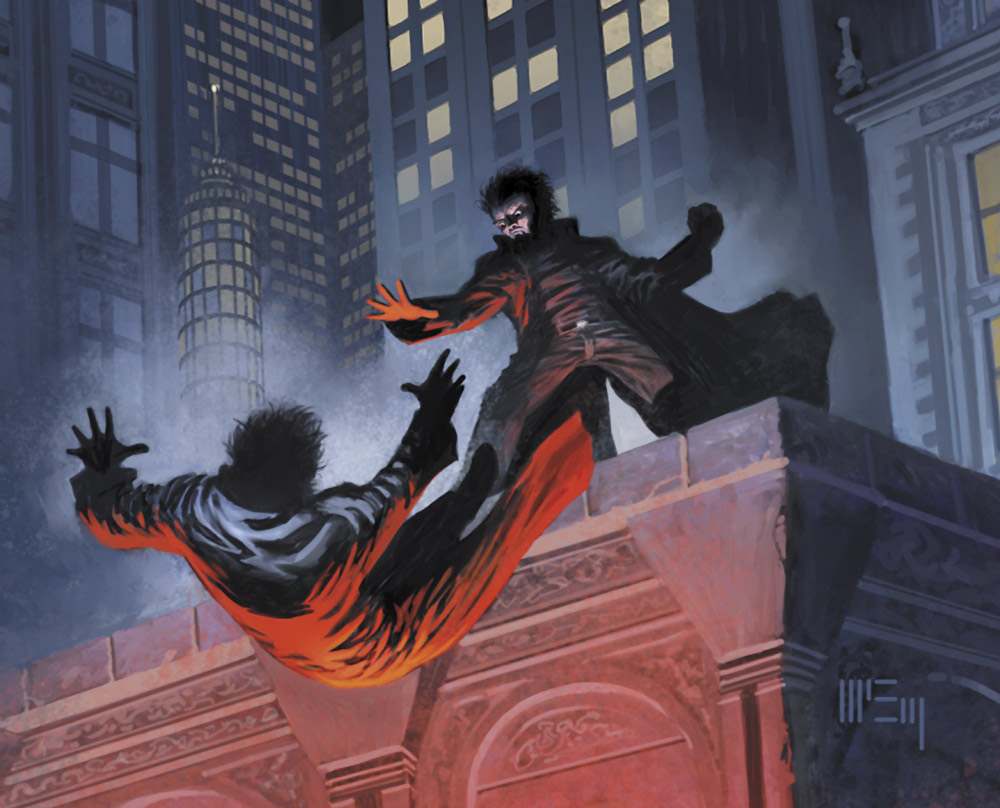 Gamers will soon have more chances to see McEvoy’s ethos at work with a number of RPG books and card games. “I’ve been doing some work for Monte Cook lately, as usual–including their flagship Numenera and other titles. Also, lots of art for some games from Onyx Path, including entries of World of Darkness, Scion, Monarchies of Mau and Fetchquest.  Those latter two are all adventuring cats, dogs and other animals. No gun-toting monkeys, but still pretty fun. I also did my first work in a long time for Fantasy Flight on their Call of Cthulhu TCG recently, which was exciting! So, you can look at all these outfits for new work from me, though I post art my Twitter, DeviantArt and Facebook regularly, too.”

Outside of gaming, McEvoy also has a new graphic novel out. “Casefile: Arkham — Her Blood Runs Cold is a horror/noir mashup. Sort of H.P. Lovecraft meets Raymond Chandler. It’s the second book in a series. Weirdly enough, I’ve done a number of Lovecraft-inspired projects over the years, but this comic is actually coincidental to my Arkam Horror and Call of Cthulu work. I suppose working off a writer’s panel descriptions is a lot like getting instructions from a game’s art director. I’ve actually applied a lot of lessons from games to comics. You craft stark covers to grab readers’ attention from across the shelf, when a nine-inch cover ‘reads’ the same as a two-inch card in perspective. Also, I try to craft a pose or composition so it invites the reader to add more details to the story, much like a RPG book would with players. My first comics projects were done in the ‘PhotoShop painted’ style I’d practiced for a few years with my game art, too.” 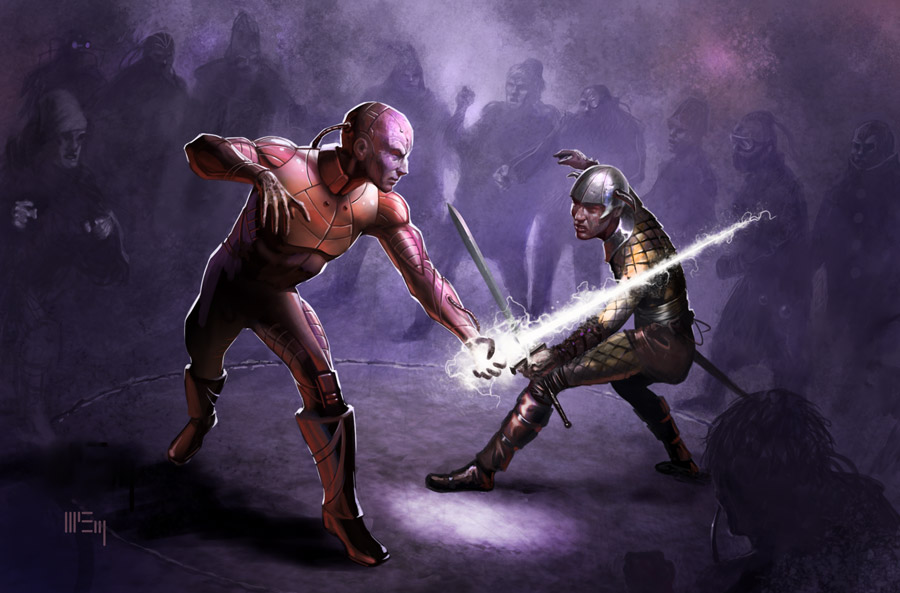 Of course, the cruel irony of getting to make art for all these different mediums is that McEvoy hasn’t had a lot of time to actually play games since those fateful sessions in his co-worker’s weekly group. “I also really suck at playing, in general. Haha. So, these days, I think I’d rather make other gamers’ lives more interesting. It’s my calling!”

Ever wondered how the art in your games is crafted? Have McEvoy’s observations opened your eyes to all the work that goes on “behind the boards?” Sound off in the comments.