If You Like House of Cards... You'll Love the Manga, Eagle - Nerdist

If You Like House of Cards… You’ll Love the Manga, Eagle

It’s an election year and Netflix has accordingly bumped up their ad campaign for House of Cards‘ fourth season. Frank Underwood’s return has been angled as a real presidential run (complete with its own “FU2016” campaign hashtag). But considering how the show basically presents what would happen if Lex Luthor became president, perhaps fans of political drama might appreciate a series that’s equally compelling, but a touch more hopeful?

Consider Kaiji Kawaguchi’s five volume series, Eagle: The Making of an Asian-American President. True to its title, this Capra-esque epic follows the rise of Kenneth Yamaoka, a charismatic senator with more than a couple skeletons in his closet. In fact, the story is told from the perspective of one of those skeletons. 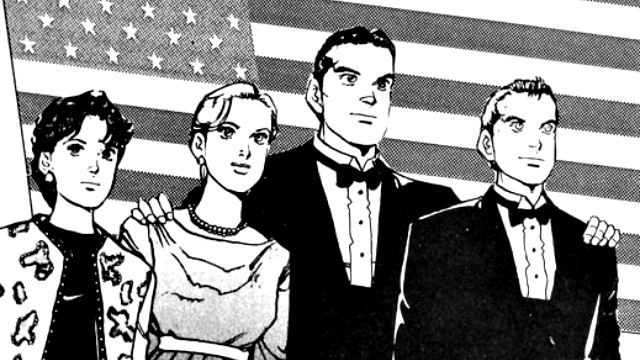 It all starts when rookie Japanese journalist, Takashi Jo, is inexplicably offered a plane ticket to America with the opportunity to directly cover Yamaoka’s campaign. The Senator doesn’t leave his motivations a mystery for long. Takashi is actually his illegitimate son, born of a brief tryst when on shore leave during the Vietnam War. And Yamaoka has only one condition–Takashi cannot publish any of his observations until after the election. Journalistic integrity gets even more compromised, almost immediately, when Takashi’s mother dies back home after a gas leak. As more convenient, accidental deaths pile up, the young reporter grows to suspect his father may actually be a ruthless, Underwood-esque manipulator and not the selfless reformer being sold to the public.

At nearly 2,500 pages, Eagle is a sprawling work that covers an impressive breadth of subjects. Obviously, race is a primary focus, and Kawaguchi doesn’t shy from addressing the hostile prejudice a Japanese-American candidate would face on the campaign trail. He also made it an at-times coy Roman à clef, pitting Yamaoka against analogs of real politicians involved in the 2000 election (like Vice President “Al Noah” and First Lady “Ellery Clayton”).

And there’s even room for soap opera intrigue. Takashi falls in love with Yamaoka’s adopted daughter–a young woman who might turn out to be his half-sister, by blood! 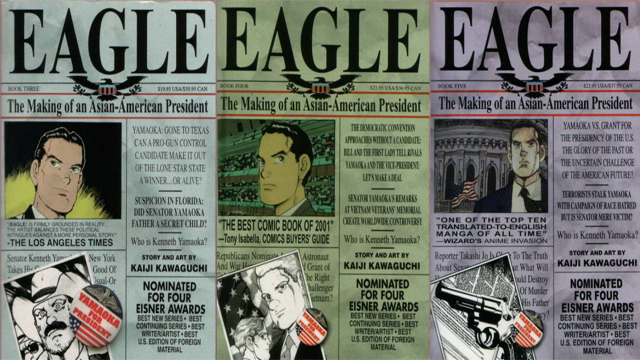 Weirdly enough, Eagle proves a refreshing reminder of the positives in our electoral process. As detailed in his prologue, Kawaguchi was inspired to make this comic because of a sincere fascination with the transparency of American politics (particularly in contrast to Japan’s). At many turns, he writes Takashi like Speed Racer, slowing down into the beltway to marvel at the very concept of direct elections. Even when diving deep into state corruption, the manga still retains an optimism about free democracy. It’s a striking dichotomy, more reflective of what Frank Capra films like Mr. Smith Goes to Washington actually were, not what they were remembered for.

Eagle also serves as an intriguing time capsule. Serialized in the late 90s, it was an early crossover hit for VIZ Media and earn several Eisner Award nominations (back then, it was hawked as a comic for West Wing fans). And it’s proved to be a highly prescient work. Sure, Kawaguchi’s prediction might’ve been off by eight years–but the prospect of minority candidate in America is far easier to picture today, isn’t it?

Have you read Eagle? Have you watched House of Cards? Do you find them fitting companion pieces, too? What political manga would you recommend? Sound off below.