We’ve turned some of our favorite members of the Scooby Gang into DnD characters! And yes, we know there’s a Buffy tabletop RPG (we may have it displayed prominently on our bookshelf) but for those who can’t find or afford the game (or who just want to have fun with DnD/convince their friends to play DnD) enjoy!

What Buffy RPG list would be complete without Buffy herself? Buffy is a Monk following the Way of the Open Hand, allowing her to focus on her martial arts and fighting technique. As the Chosen One, Buffy would have a Folk Hero background. We’ve decided to showcase an early-in-the-series Buffy, so she isn’t a very high level, but she is still clearly awesome. And, of course, where would Buffy be without Mr. Pointy? 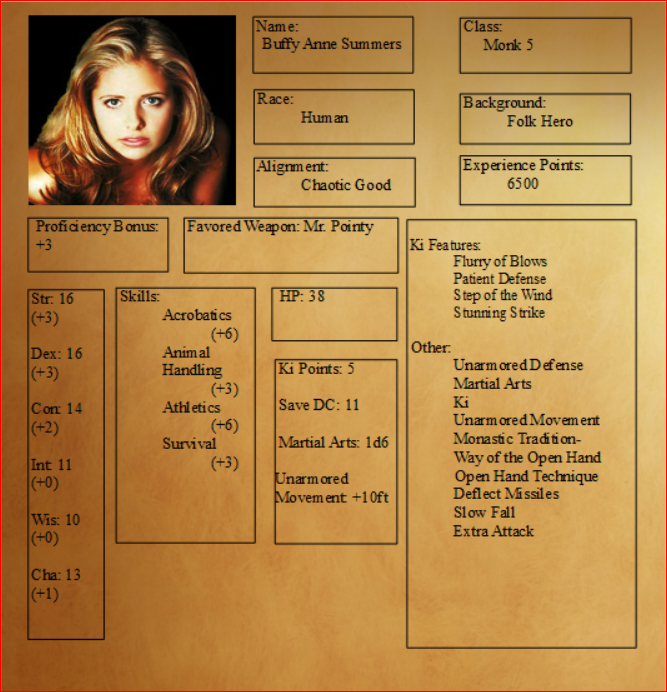 Who watches the watcher? Rupert Giles is Buffy’s Watcher, her liaison to the council and guide through her journey as the Chosen One. We’ve chosen to make him a Wild Magic Sorcerer with a Sage background. Giles is older than the rest of the Scooby Gang and, as a result, higher level than the rest. Most people might question why we’ve made Giles a sorcerer instead of a wizard. We would like to remind those people of Giles’ youth as a rebellious worshiper of chaos, making the Sorcerer class highly fitting. 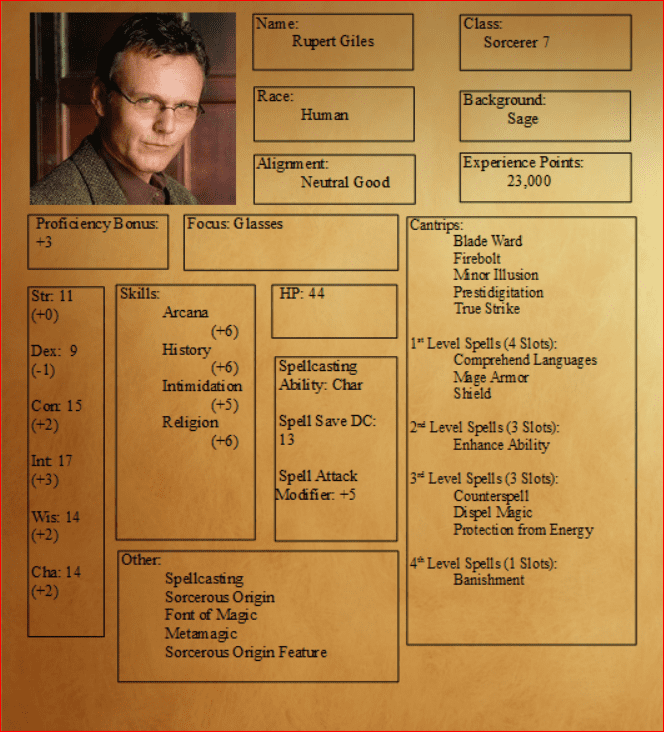 Tara will forever be a member of the Scooby Gang in our hearts. Willow met Tara at a Neo-Pagan meeting (Willow thought they were real witches, but they were neo-pagan nature worshipers) and Tara has never lost that connection to nature. We’ve decided to make Tara a Circle of the Land Druid to honor that connection to nature. Tara was also convinced since a young age that she was half-demon. Although that proved not to be true, and is reflected in making her a human here, anyone RPing as Tara should include that conflict in her backstory. 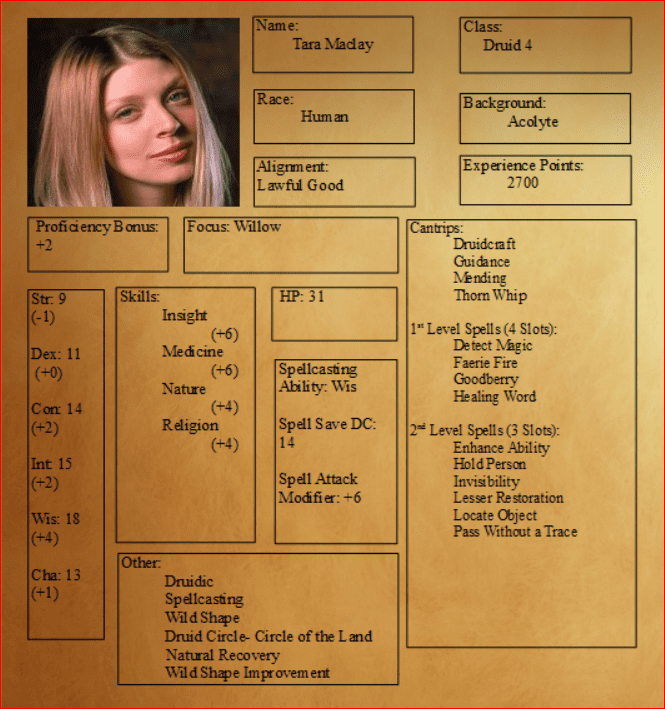 And then there’s Willow. Smart, quirky, eventually confident Willow. Given her love for academics and propensity for magic, we’ve made Willow a Wizard Sage. Since Willow has a habit of playing around with life and death (yes, we’re counting soul magic in that), we decided she would be in the School of Necromancy. Her alignment was a bit trickier since she is often considered straight-laced in the first few seasons (you know, despite fighting the forces of darkness and hacking into multiple things she really shouldn’t have) but has also gone to the complete opposite side of the coin. We chose to go with Neutral Good here since, in general, Willow fights for the white hats. 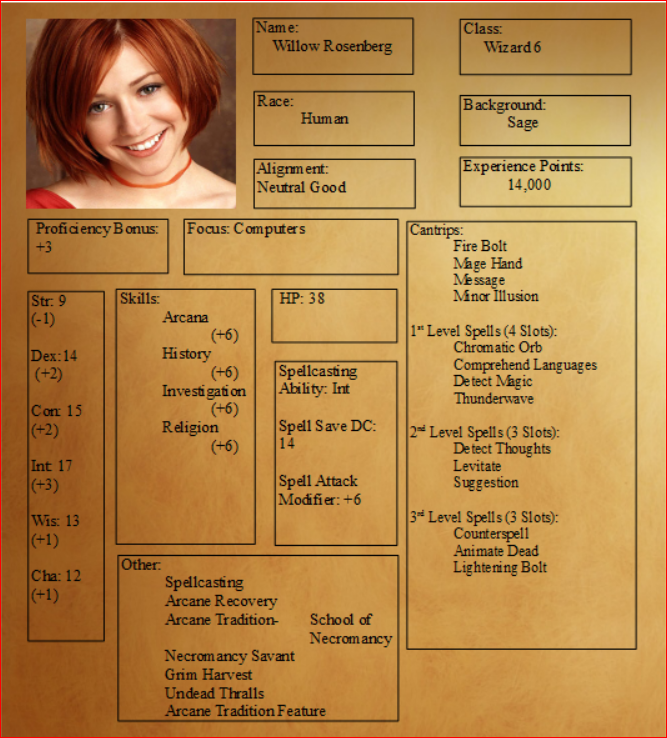 Alexander Lavelle Harris has been known as many things to the Scooby Gang, most prominently as the mascot or one regular, non-magic member of the gang. Now, we gave him some magic here, but hear us out! Xander is the mascot, he inspires others and never gives up the fight for good, despite not being able to fight like Buffy, wield magic like Willow, or even research like Giles. So, we’ve made Xander a bard to represent his ability to inspire others. We’ve kept his spells primarily to those that help others, except for Vicious Mockery. Xander has always had a sharp tongue made for comedic relief, so Vicious Mockery is the perfect cantrip to use and use often when RPing as this member of the Scoobs. 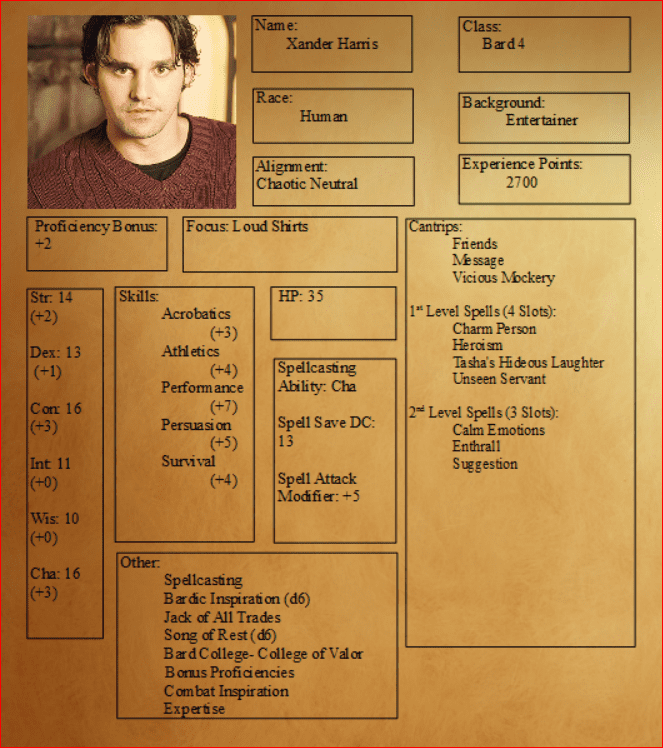 And that concludes our first round of Buffy character sheets! Did you agree with our choices? Is there another character we should have covered but didn’t? Let us know in the comments!

All Images Credited To: Mutant Enemy