Details are a bit sparse right now, with the game only being revealed at Origins, but what we know so far is incredibly exciting. The game has been designed by Richard Launius, creator of Arkham Horror, and is a fully cooperative game, with a twist. Each player plays a different aspect of Colonel George Taylor’s psyche and must work together to ensure he overcomes the trials and stresses of the game. This interesting approach allows the game to inject elements of psychological horror, while staying true to the film; Colonel Taylor is alone. 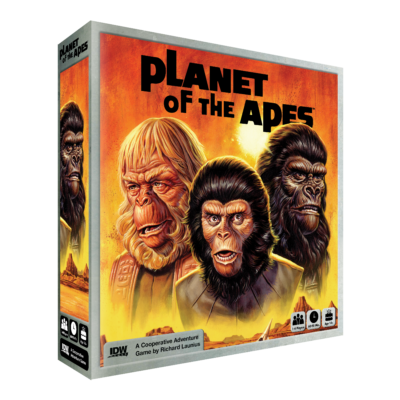 The game itself will follow the plot of the original film, so if you haven’t seen it yet, I suggest waiting until after you play the game. There will be a much larger payoff for you at the end. Even if you have already seen the film, playing the game from the perspective of Colonel Taylor will bring new insights and challenges, while providing a new way to enjoy the film. Planet of the Apes is planned as the first game in a series following the films (which is SUPER exciting!) and with an October release date, is right before the franchise turns 50 in 2018.

As a lover of all things miniatures related, the news that the first printing of Planet of the Apes will include 4 plastic figure markers has me going bananas (sorry)! You can get your sticky paws on Planet of the Apes this October at a price of $59.99.

Would you recommend watching the film before playing the game? Let us know in the comments!

TAGGED: Planet of the Apes, idw