For those who aren’t familiar, Hunters follows a group of Nazi Hunters in 1977 New York City. The Hunters realize that there are hundreds of Nazi officials living in America who intend to create a Fourth Reich. So, this group of marginalized people decide to literally punch Nazis in the face (and kill them) to prevent mass genocide. It’s a truly fresh premise and the trailer only ups the intrigue factor.

The action starts at Jonah Heidelbaum’s (Logan Lerman) grandmother’s funeral where he meets Meyer Offerman (Al Pacino), who says he knew her from concentration camps. Jonah is understandably angry that his grandmother survived such horrors only to be killed by a home intruder, but things get interesting when the duo surmises that this may not be a random murder.

Meyer leaves Jonah a card to come to an address to discuss things further. When Jonah arrives, he discovers that his grandma wanted to protect him from Nazis currently hiding in plain sight in America. Meyer reveals that Jonah’s grandmother helped him create a group of Nazi hunters.

The Hunters currently includes lock-picker Roxy Jones (Tiffany Boone), spy Sister Harriet (Kate Mulvany), soldier Joe Torrance (Louis Ozawa Changchien), master of disguise Lonny Flash (Josh Radnor), and husband-wife weapons experts Murray Markowitz (Saul Rubinek) and Mindy (Carol Kane). Of course, Jonah completely wants in with the action because why not?! He doesn’t seem to have any discernible skills at the moment but there are certainly enough people around him to turn him into a force.

A U.S. Agent realizes that there is a group taking out Nazis and warns Jonah that joining this group will make him the evil he wants to fight. It’s not clear what she thinks is the “right” way, but she will certainly be on the trail of The Hunters every step of the way. The remainder of the trailer is filled with high-action shots and reveals that Hunters is based on a true story. 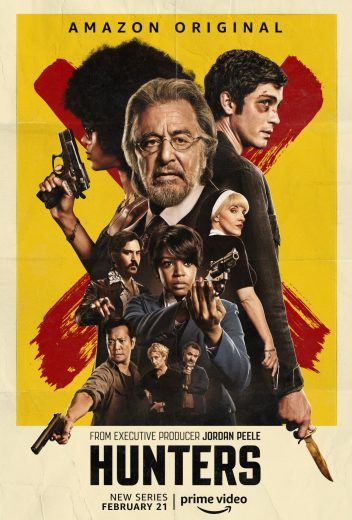 And, bold title cards declare that “Revenge Is Righteous.” At the end, Jonah remarks that he needs to learn how to fight. Meyer tells him that he knows a few people who can teach him as a clip of Roxy Jones throwing punches is seen. It’s bold, fun, and full of ‘70s aesthetics along with Talking Head’s 1977 hit song “Psycho Killer” blaring in the background.

Hunters is certainly a different take on a Nazi-related story with a wild premise and an awesomely diverse cast. And, how can you really lose when you have Al Pacino leading the way?

Peele has been involved with and created some incredible projects in the last few years and hopefully Hunters will follow suit by pushing the entertainment envelope.