Honestly, shows about MMOs gettin’ real are a dime a dozen in contemporary anime and few go beyond basic gimmicks. What sets Yoshiro Togashi’s shonen opus apart, most pointedly, is that it’s a sprawling epic from the mind of a man who lives, breathes, and dreams games. In other shonen, power levels and other stats are largely meaningless set decorations. In Hunter x Hunter, they mean everything. (The “x” in the title is silent, by the way. Just go with it).

The show’s premise is almost challenging in its simplicity. A young fisherman, Gon Freecss, leaves an idyllic childhood in the wilderness and ventures forth to become a monster hunter as great as his absentee father. He befriends a trio of competitors at the Hunter Exams–obstacle courses existing at some deadly and whimsical midpoint between the Eliminator on American Gladiators and Wonka’s chocolate factory. There’s Kurapika, a sensitive moppet on a quest for vengeance; Leorio, an ever-frazzled med student seeking monster bounties to pay off tuition fees; and Killua, the middle child in a clan of assassins that’s like a deadlier Addams Family. 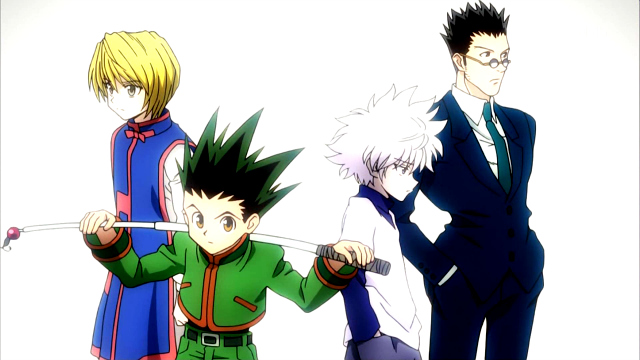 The show follows these four on a variety of adventures, and that variety is truly wide. There’s an unusual discipline of plotting in HxH; it’s a show about monster hunters who do everything except hunt monsters. In one arc, Gon and his friends act as bodyguards, mediating a feud between rival crime syndicates. In another, they function as junior commandos and liberate a small nation from the thrall of a mutant dictator. Two whole arcs are entirely about them training. But no monster hunting.

It’s as if plotting the series was a game for Togashi, and he self-imposed handicaps to make that game extra challenging. Nearly every plot choice reflects his boundless interest in the nitty gritty of gamesmanship. Whenever a fight occurs, the combatants do play-by-play commentary for each attack and counter in tense voice-overs. During a tournament arc, every match of every bracket is documented in thorough detail. Even an election gets its own ten-episode arc (with the strategy of votes broken down with the kind of game theory reminiscent of Russell Crowe’s theorems in A Beautiful Mind). The stats of action hold as much (if not more) intrigue than the action itself. 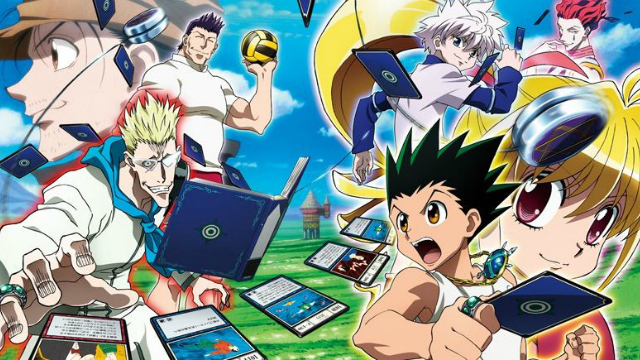 Togashi’s obsession finds its most intense focus during the “Greed Island” arc, when Gon and his friends track down an absurdly rare video game. Only 100 copies of it were ever made, and it’s meant only for the world’s richest elite. Whosoever plays it shall be transported directly to its levels is able to retrieve special items to bring into the real world. So, it’s like a Flying Dutchman for gaming culture, basically. What’s impressive, though, is how this arc involves a made-up card game with rules more thoroughly-developed than some real card games’–even though no actual product is being advertised! Togashi devised enough details to fill an instruction manual, simply because such details fascinate him.

Focusing on the gaming aspect undersells the characters’ appeal, of course. If the Hunter Exams are deliberately paced, it’s partly because Togashi documents every trial, yes; but it’s also because he always defines Gon’s personality in contrast to those conflicts. He structures the opening arc to make sure you come to like this kid and his pals so much, you root for them almost instinctively afterward. And he does that with the careful measure of a game designer.

Again, Hunter x Hunter might advertise itself as a shonen about monster hunters, but it’s really a shonen about gaming. More so than anime about MMOs becoming real life. More so than anime actually based on games. The show doesn’t use gaming as a gimmick, either. It’s very much a celebration of gaming’s true ethos, and that quality sets it apart so compellingly from every other shonen.