Full disclosure: cyberpunk is arguably my favorite genre of sci-fi, followed closely by space opera. I think it has something to do with the street level and not-too-distant future aspect of it all that seems like it could actually happen to me more so than whipping across the galaxy in a warp-drive enabled starship. By that same token, I can’t even imagine the insurance nightmare it’d be to get a cyberlimb. It’s also fascinating to see as we creep along further in to the 21st century how the line between reality and cyber-fiction continues to shrink. Admittedly, it’s not the shiniest realm of escapism.

With such sterling examples of the genre done right as the Ghost in the Shell, Akira, and of course the legendary Blade Runner, people pretty much know what to expect in a Cyberpunk story, right? Evil corporations, smart killer ‘bots, cyberspace as a physical destination, and so forth. This style of story is already well-represented in tabletop with a variety of play styles, from the inimitable Shadowrun, Netrunner, and I’d argue even Resistance. However, there is a marked lack of tactical combat that suits the chrome-plated adventure and mayhem intrinsic in the genre so well. Something that really brings an Imperial Assault-style experience to the table. That is about to change. 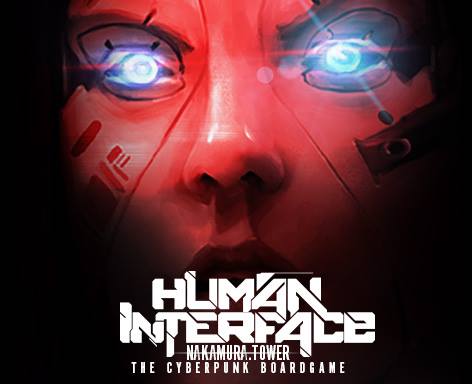 Enter Human Interface: Nakamura Tower from first-time developers Postindustrial Games, Ltd. The game is, without question, a love letter to all things cyberpunk and hews close to many of the familiar tropes we’ve come to know and love. The crux of the game focuses on two teams, or “Factions,” squaring off against each other and the security drones in Nakamura Tower to either protect or steal corporate secrets. One side represents a team of elite Nakamura agents, and the other their rivals from the Advanced MicroMachines corporation, the ominously named Ubermensch Gang. Each player gets a group of 5 heavily armed badasses with a variety of skills, and all come in to play at some point as the game features combat and challenges both in the real world and in cyberspace. 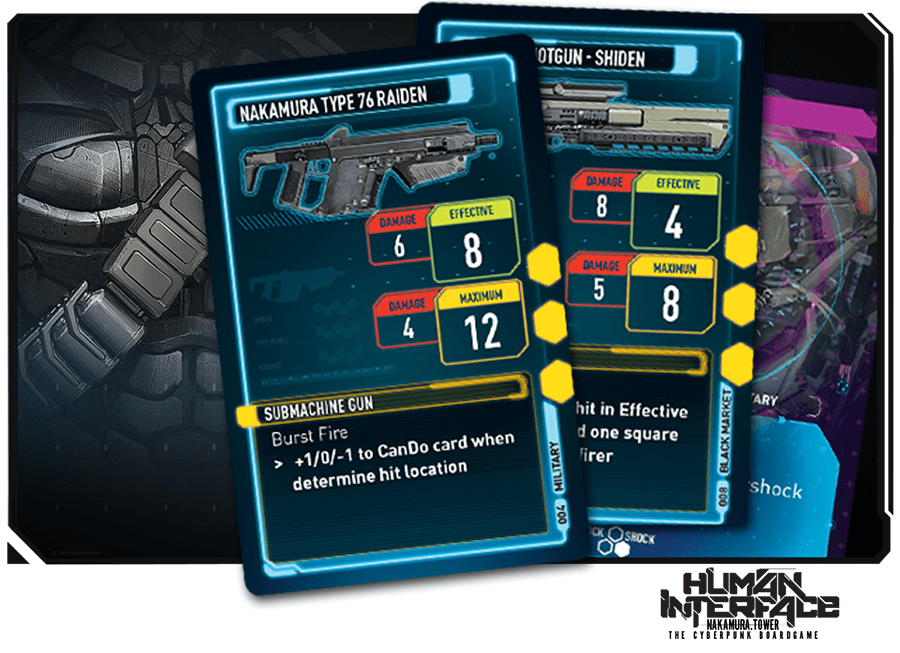 Each character has a number of core stats that can be augmented by various weapons, cybernetic enhancements, and programs. By the time a group has run through the 16-mission campaign presented in the core rules, they may be very, very powerful indeed. There are also already two expansions available: Pacification, which introduces an outside Police faction to the mix, and Black Stone Commandos Operations which brings us a quintet of hardcore lady mercs. There is even more content planned, as promised by a successful Kickstarter campaign. 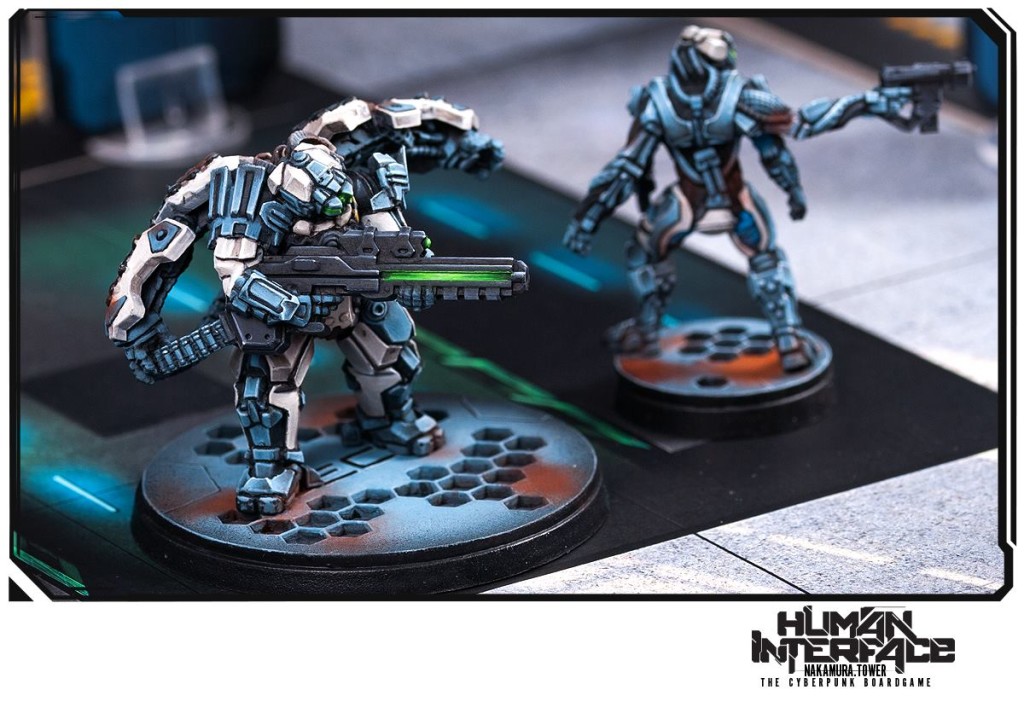 With the board made up of a series of appealing, interlocking board tiles and each team represented by gorgeously crafted miniatures, there is no denying the eye candy factor in this game is HIGH. While there’s a lot of good stuff in this box, the thing most conspicuously missing is dice. The game uses the character’s base stats augmented by a mechanic called the “CanDo Cards” to determine the outcome of situations where success isn’t necessarily guaranteed. Keep in mind, too, that not every CanDo works with every faction, so luck plays a huge factor in card draws. While I miss the visceral thrill of rolling for victory, this resolution method suits the gameplay perfectly.

This game is a rare mix of style and substance, and deserves a place on your game shelf as soon as possible. The initial backer boxes have shipped almost in their entirety, and though the only place to currently order the game is on the its website, the designers are incredibly responsive and eager to get the message out about their hard work. Shoot a message and let them know you’re ready to get transhuman!

What’s your favorite piece of Cyberpunk  fiction? Or fact? Add it in the comments below!