How Wyrmwood Makes the World Better, One Dice Tower at a Time

If you’ve seen even just one episode of Critical Role, you’re probably familiar with the name Wyrmwood. Not only has Wyrmwood Gaming generously worked with Geek & Sundry and Critical Role for giveaways of their incredible dice trays practically since the beginning of the livestream, they also painstakingly handcrafted the table that the cast now gathers around every week. 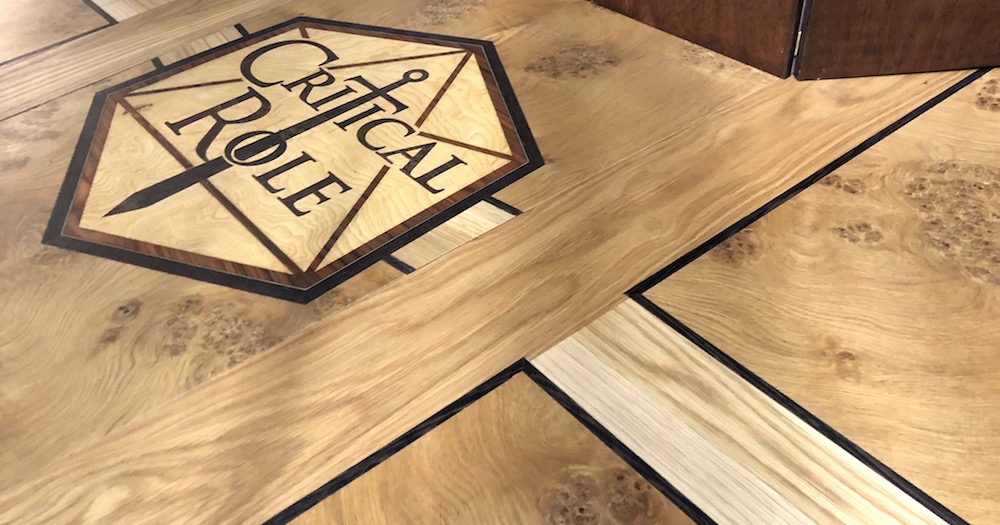 Wyrmwood is about to reach the end of a crowdfunding campaign of the Magnetic Dice Tower System (Bespoke Edition), and you still have time to throw in your support. Make the dice tower of your dreams before time runs out!

That’s not all you should know about this amazing company, though. Did you know that Wyrmwood is actively involved in charity work benefitting the environment and support for mental health? Meet the awesome company that’s making the world better for gamers in more ways than one.

After two successful crowdfunding campaigns, Wyrmwood is back on Kickstarter for the bespoke edition of their exquisitely crafted dice tower. You can select every little detail of the tower, from the type of wood used, to the engraving, to the design of the box closure.

The return to Kickstarter was inspired by the fans who missed out on the first crowdfunding campaigns, Wyrmwood’s Chris Gates tells Geek & Sundry.

“We were still relatively unknown back then, and a lot of people never got the chance to back that campaign and get access to all of the custom options and fun extras,” Chris says. “Combine that with the fact that we had some new ideas, such as custom strap profiles, the ‘Mistress of Maps’ tier with Deven Rue’s cartography, and revisiting and updating the Dungeon Master Tier, all things that only really made sense within the context of a Kickstarter project.” 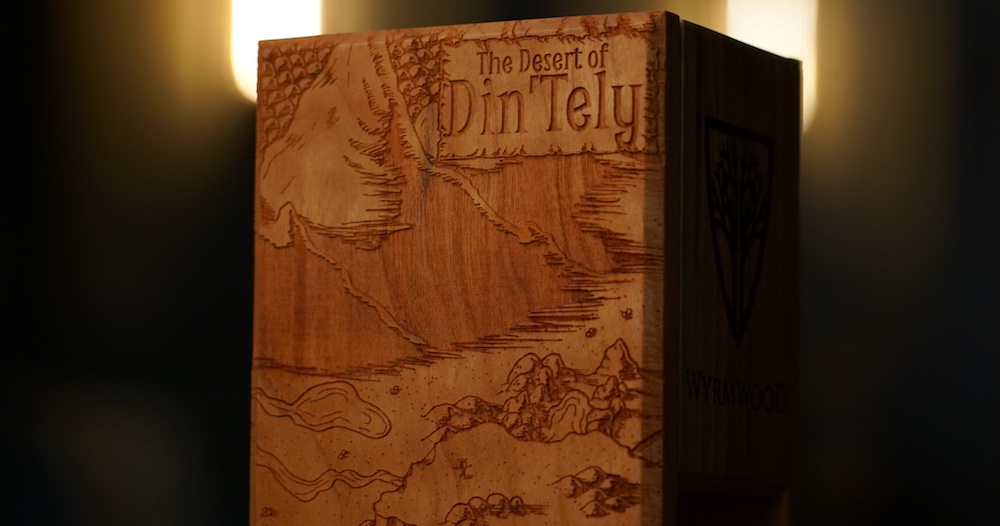 Although it might seem counter-intuitive, it’s also easier on Wyrmwood to take a large number of custom orders at once rather than a slow trickle through an online storefront. Instead of ordering a rare wood in small amounts at a time, once the campaign is complete they will have the information they need to send in one big request and fulfill a much larger number of personalized orders.

“This allows us to produce all of these custom orders together in an efficient way, even though virtually no orders are going to be exactly the same,” Chris explains. “We can manage production efficiently, minimize our waste and guesswork, and offer backers the best prices and the best variety of options.”

Wyrmwood makes every order by hand with an unrivaled attention to detail. The time it takes to craft the perfect dice tower varies by materials, Chris says. 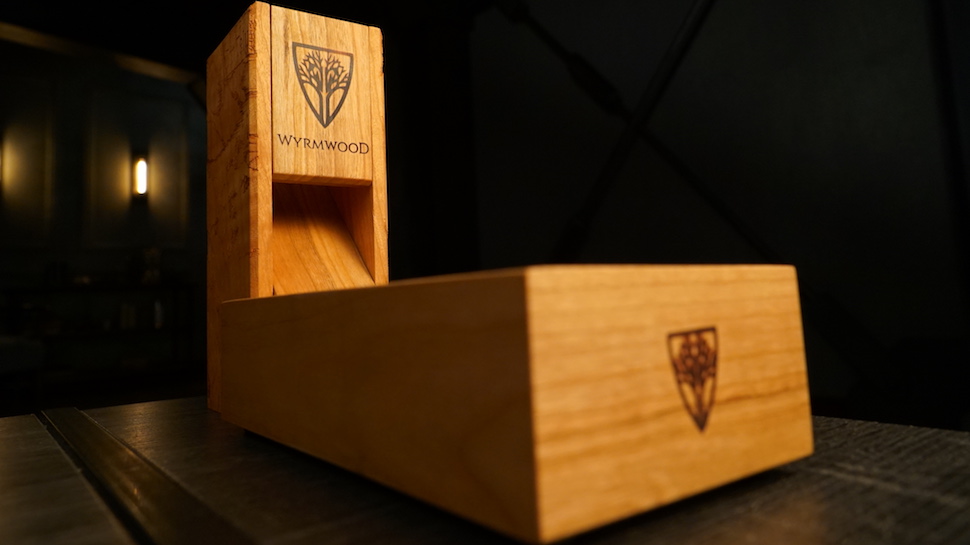 “The process can range from hours, to days, to a week or more, depending on the wood and techniques being used. Gabon Ebony is a great example. As a very temperamental exotic, it needs time to ‘season’ – about a month after it’s cut – before we are able to begin working it. Bypassing that risks the final piece warping and becoming unusable.

“The inlay work on our Dungeon Master tier can take a skilled craftsman a full day, just to cut the inlay by hand, and that’s before we get to actually building the tower.”

You know their name and the gorgeous gaming accessories they make, but do you know how it all got started? Wyrmwood and Geek & Sundry first joined forces in 2013 thanks to the vlogging and editorial work of Teri Litorco, Chris recalls. As for Critical Role, the cast stumbled upon Wyrmwood’s products at a Gen Con long before there were live shows, and a new partnership was born.

“Being fans of each other’s work, we both really wanted to support each other as creative forces doing awesome things in the tabletop space,” says Chris. “We outfitted them with some gear, launched the  CRITROLE coupon code, and began talks concerning their table, which came to fruition in the first episode of the second campaign.”

Wyrmwood’s incredible work goes far beyond the tabletop and into charities worldwide. Naturally, one of the company’s priorities is preserving the environment, and they’ve partnered with Rainforest Trust for years.

“We donate a portion (5%) of all sales of our most rare exotic woods (Zebrawood, Wenge, Gabon Ebony) to this organization,” Chris says. “We focus these contributions towards their work in sustainability, which helps to ensure that these vital areas will continue to exist and thrive for future generations.”

They’ve also partnered with  One Tree Planted and  Worldbuilders recently, running promotions and donating to their annual fundraiser, respectively.

Wyrmwood and Take This have also partnered in support of mental health awareness with the Box of Hope.

“It’s a simple item,” describes Chris. “Each is handcrafted, and functions as a sort of worry stone/token, in a randomly selected wood, with the purpose of reminding a person they’re not alone, making it a great gift that supports a good cause.

“We’ve supported other charities as well, some with one-time donations, others through promotions, and still others like Extra Life with on-going regular support. If any readers operate a charity and think we might be a good fit, feel free to reach out to us at [email protected] and we’d be happy to talk, as well.”

Special thanks to ArseQueef for creating the GIF!

Did you know? You can still use the CRITROLE coupon code for free shipping in the U.S., and CRITROLEWORLDWIDE for $10 off international shipping.