Getting Your Kids Into The (Roleplaying) Game - Nerdist

Getting Your Kids Into The (Roleplaying) Game

Everyone gets brought into roleplaying games in different ways. Perhaps you played at a friend’s house while their parent ran a campaign or you ran games yourself when you were 11 like me. Either way, as my kid has showed an interest in structured roleplaying, I’ve looked for ways to foster that imagination. Besides, the prospect of hanging out and running game for my kids just sounds fun. After helping create a few games and bearing witness to shorties coming up with their own rules sets, I’ve got a few tips and ideas to share for gaming with halflings.

At first, it may be tempting to have your kids play DnD or Shadowrun with you. Goblins stealing gold and hacking systems are easy enough concepts to understand. Your kids might already be better at understanding hyper-corp security measures than you are, anyway. Complexity is not the reason to avoid a genre.

If you will run a game for kids, try running something in their wheelhouse–something that they love already. The Avatar: The Last Airbender series or Marvel Universe offer great RPG settings that are instantly relatable and create excitement for all involved. There are a number of systems out there that you can easily adapt to fit whichever setting you may choose. 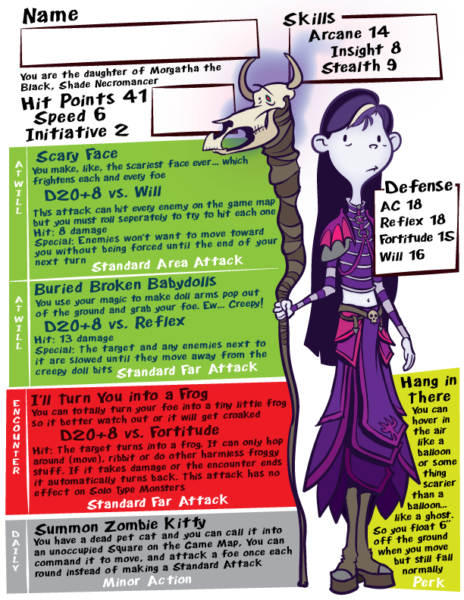 All right, it’s possible you may only have one diminutive person who is interested. Or at least, not enough of them to form an entire party. Sidekick adventures work well in this case. As a GM this means penning a story where your current older players take on squires. Get one-on-one time with kids to create their characters—then sit back and laugh. Watching older characters try to reign in younger ones from being eaten alive is its own reward.

Sidekick Quests is an ongoing web comic, character sheet hub, and easy to use DnD addition designed for this purpose. It takes care of streamlining a game system down for kids and provides some great art and mini-adventures.

Remember to focus the adventure on the squires, not the adults, lest you lose the kids’ interest. The story should be about their characters; the experienced mentors are merely tagging along. Doubling back to starting villages is a hilarious trip down memory lane for vets, as is watching the inexperienced gamers handle the same scenarios you did. They may even be better at it than you were.

The goal of roleplaying is to have fun and engage in mutual imagination, so why not remove some of the pressure and let the 9-year-old GM? When any adults at the table are just playing, it can reduce the anxiety among the younger ones—freeing their imagination.

Kids running games for other kids is the hardest, but probably the best way to get your children involved in gaming. Before you know it, they will be off designing their own playground LARP rules or weather-based CCG games with damage calculations on droughts versus earthquakes.

These examples are what I’ve seen work; but everyone has different experiences. If you’ve done any gaming with kids or have fun ideas, please share them in the comments or let us know!

Featured Image: Wizards of The Coast