How to Enjoy Medieval Times as an Adult - Nerdist

How to Enjoy Medieval Times as an Adult

The rain fell lightly as we drove up the 5 freeway back to Los Angeles. Stouty’s head rested on my lap in the backseat. I was still dressed like a gypsy in red and gold, reminiscing on the night with Mike and Vanessa, when I thought to myself, “Medieval Times has no right to be this much fun. I should write up an article about how to do this as an adult!”

Medieval Times Dinner & Tournament, that place you may remember fondly from your childhood if you were fortunate enough to have your parents take you. There were knights and horses and you got to eat with your hands. It was the coolest! I never got to see it as a child, so I wasn’t fully sure what to expect. When my friend Nox decided that was where he wanted to go for his birthday, we all got on board. Mind you, “we” are a bunch of geeks and LARPers with more costumes than actual clothes. We were going to be “those people” you were a little embarrassed to be seen with. But you know what? We all had way more fun than we ever anticipated.

This is how we did it.

Go with people who will get into it 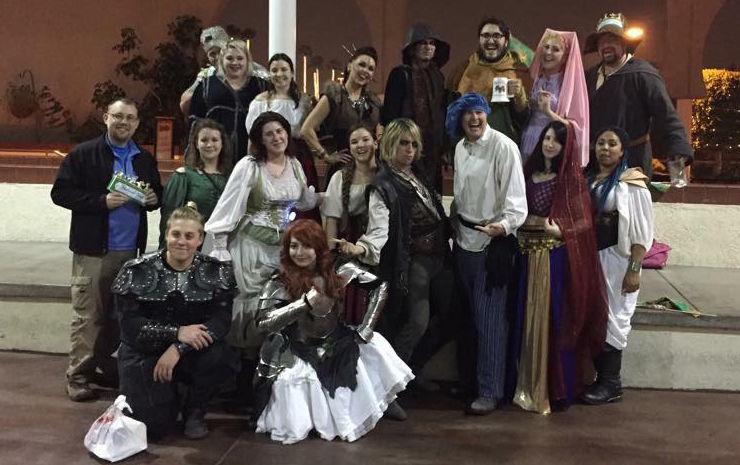 Yep, we were THOSE people

If you’re going to Medieval Times, go with people who are willing to act silly and lose themselves in the moment. People who are going to say, “This is dumb. This is for kids.” are not going to enjoy themselves, and they’ll bring down your experience. 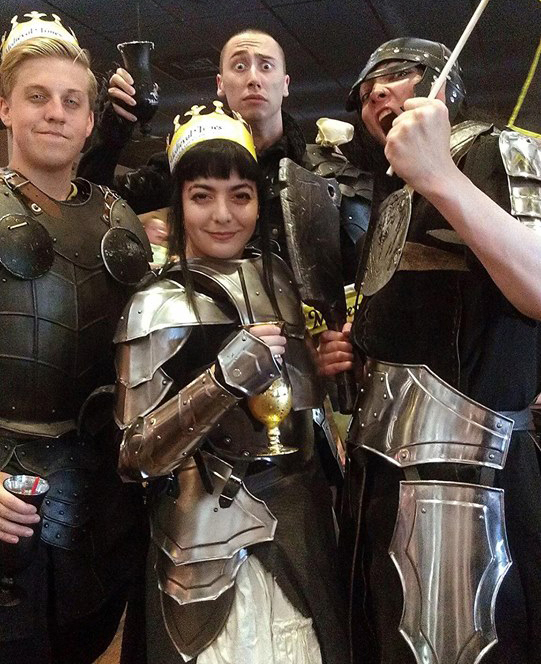 Knights of the Mid City!

Most of us were really into the idea of dressing in costume. Not everyone was at first, but once the rest of us get into our looks, the tentative ones decided to join in the fun. When all participants dress up, makes it more comfortable for everyone the group. Having only part of the group dressed might make some people feel self-conscious. There’s solidarity in cosplaying together. If you’re not a group that’s into cosplay, that’s totally fine, but I do recommend at least giving it a try.

Splurge on the drinks, but not the tickets 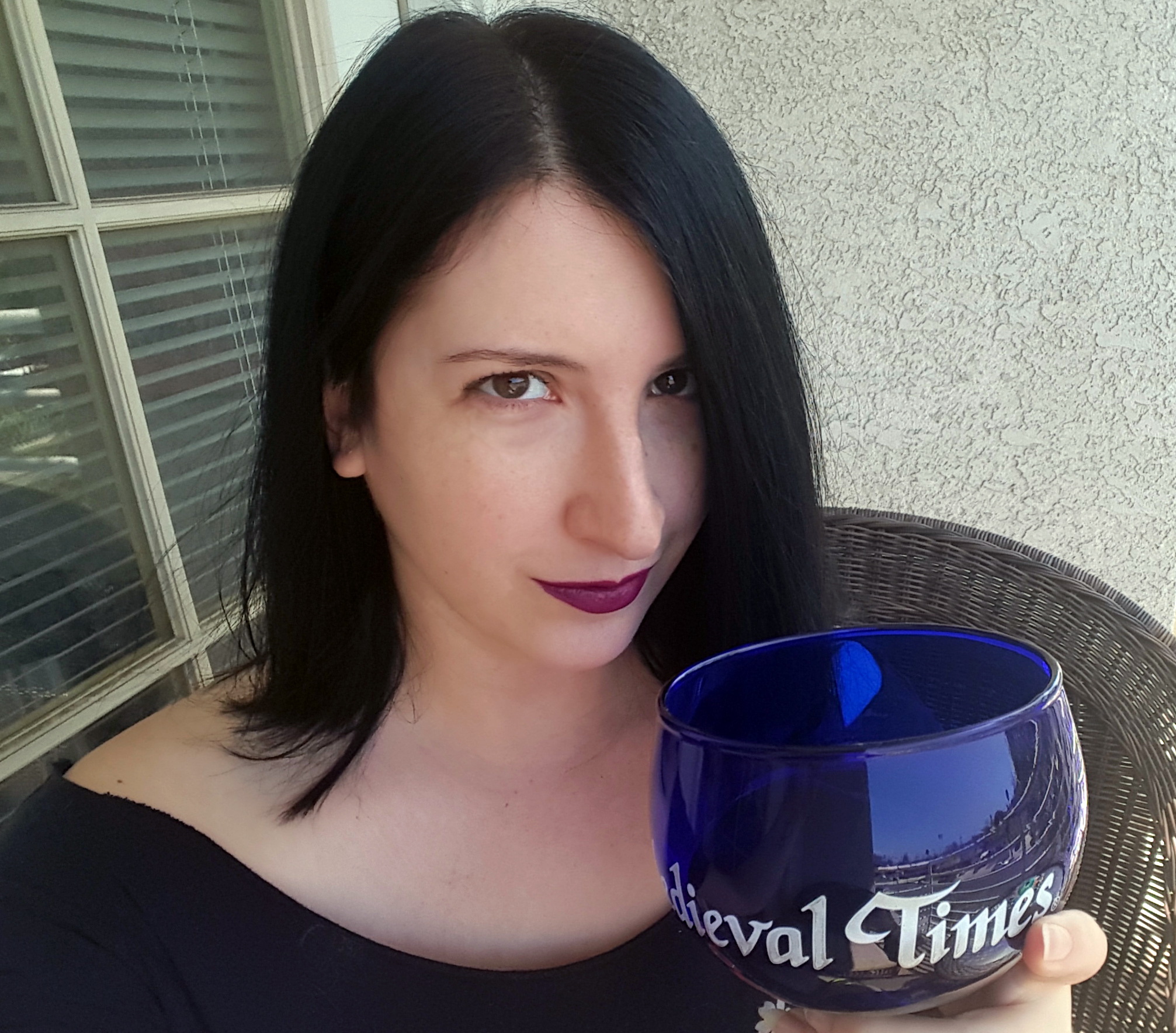 Tickets for Medieval Times usually cost around $60 a pop. However, with a little research, you can usually find a discount code. Keep in mind, there’s a full meal with beverages included in the price.

If you’re old enough to hit the bar, this is where your pockets will hurt. They have beer and specialty cocktails, most of which are spiked slushies containing approximately two ounces of hard alcohol. These drinks are really big, but don’t get you so drunk that you make a fool of yourself. Now where it gets really pricey is that you can purchase a commemorative goblet or stein. They’re all actually pretty nice, plus you can bring them back to use again. I was feeling feminine that night, so I went with the giant cobalt blue goblet and was swirling my strawberry/peach/vodka slushie around like Cersei Lannister. The thing was so big that it didn’t fit in any of my cabinets.

Cheer for your knight We were seated in the Green Knight section with at least 50 other people. Our group was really into it, but so was everyone else in our section. The energy was electrifying, and our knight smiled in a way that said, “Wow, people don’t normally cheer for me like this. I feel great!” After a short while, my friends and I had picked our favorite knights of the group, but we always cheered for ours the loudest. There were points where we were up on our feet screaming as loudly as we could. (It’s great to get into it, but please be courteous to the people around and behind you so they can enjoy the show too.)

Turns out, your cheers benefit the performers. There is a hierarchy at Medieval Times where the most senior and popular knights get to perform in the biggest shows–usually Saturday nights. If you think a knight is doing a good job, root for him. You’re helping to better his show career.

Be kind to the workers and tip

The staff at the Buena Park, CA show were amazing. Everyone is super nice, they know how to handle large–and admittedly slightly disorganized– groups. They always address you “m’lord” or “m’lady.” These people are insanely busy, but also really good at keeping things organized. It’s easy to forget to bring cash for tip because you’ve already paid for the meal with your ticket. Here is your friendly reminder: Bring cash to tip, ye knave!

After the show, you can go into the lobby and meet the entire cast. The villain of the show bared a strong resemblance to Jon Snow, so of course we had to cheer “King in the North!” whenever he showed up. Several of us chatted with him after and he was a really cool fella. Some of my friends played a LARP game with the cast by sneakily clipping clothespins on their costumes as a mark of a successful pick-pocketing. The staff is probably still finding random clothespins around.

So that was our incredible night at Medieval Times.  We were very impressed with the amount of talent and labor that went into the production. It was absolutely worth every penny. If there is a show in your area, maybe this is the place you should consider for a special night out with your friends.

How do YOU do Medieval Times as an adult? Let us know in the comments!