How To Arrest Your Characters In Style With These GM Tips

GM Tips Our series to help Storytellers and Game Masters improve their craft and create memorable roleplaying experiences. Last week, I covered adding conspiracy to your campaigns and with all the talk of heists—this week we cover arresting your characters. In style.

There comes a time in every Game Master’s career where their players break the law. Wait, I take that statement back… the characters always break the law. Sometimes at level 1, always by level 5, and if by level 11 they aren’t best friends with the local magistrates your party rogue needs to evaluate his career choices. Being jailed is a main storyteller tool and there are few tricks to making the encounter engaging rather than frustrating. In Out of the Abyss, the characters start off already in jail, and so (by default) they don’t have any sense of loss.

When you arrest characters mid game, take away their gear and their abilities, it may feel more personal. Which is the overall goal in most cases—but sometimes it goes too far. Players get frustrated, the encounter seems impossible, and the storyteller has to resort to deus ex machina to bust the characters out of jail. So to avoid sour tastes in everyone’s mouth, here are some ways to make jail scenes badass.

For your characters, it might look like this: a single fight goes south, and the villains knock them out, capture them, and throw them in cells. Later, they wake up in jail and now have to find their way out. 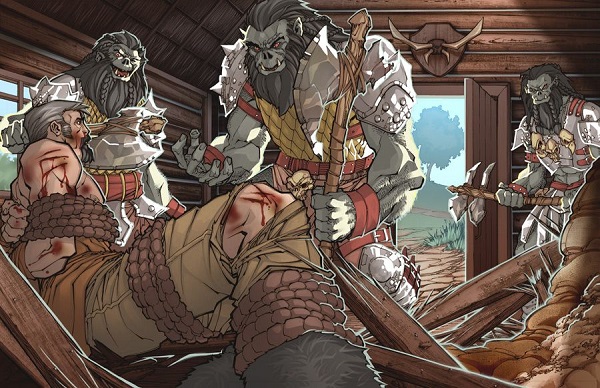 Getting arrested should be a show, one where the players are marched through the town with crowds watching them. Let the characters see the regular citizens of their jailers, have tomatoes thrown at them, or get nods from sympathetic allies. If it’s possible, make sure to have them booked, with their list of charges ran off in front of the press.

Storytelling the arrest in this fashion accomplishes a few goals for your characters; first, it creates immersion. By showcasing hooded rogues in the crowd you set up any future escape plan ahead of time. Second, when you run the booking scenario, you give charismatic characters a chance to shine. Most importantly, by marching them through town, you create a larger atmosphere that adds gravitas to their scenario. Which is really the true intent of being arrested in the first place.

If you’ve got a rambunctious party of characters and at least one responsible character, you might be tempted to only arrest the guilty parties. If you incorporate a public arrest, there might be a healthy amount of face-palming from the characters in the crowd who avoided the fuzz. Do your best as a storyteller to get them all arrested if possible. Send out rangers to hunt the remaining party members down, or use a fair bit of wizard-jailing magic if you need, but keep them together. Being locked in jail together is the time well-spent bonding and you don’t want to deny that from your players.

It’s okay to throw them in opposite cells of course as that enhances strategic planning. If it’s impossible to arrest all the characters, at least keep some involved in the scene via guard impersonation or lurking nearby. The goal is you don’t want to divide the party into two separate scenes happening at various times. In jail scenarios, the pace of the game moves differently than outside, so having one camp of characters out of jail messes with your game tempo. You’ll have a far more compelling arrest if you just catch them all. 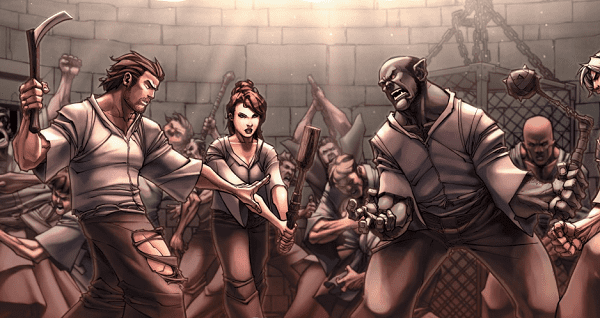 Your PCs may be in jail for a variety of reasons, but unless you are running an evil campaign, they aren’t the worst of the bunch. It can be amusing and jovial to have the town drunk in the slammer with them, but for real impact, pull out the real killers. Jail scenes are a great way to introduce future arch-villains or other colorful characters that might make the players feel uneasy. Unable to harm each other, this is a chance to play some mind games and make their stay in a cell more than just a passing of time.

When the inevitable jail cell break comes, there is always a chance that a villain uses it to escape themselves. Heck, maybe they even teamed up to get it done. Eight sessions later when that villain is causing havoc, the players will have their release on their conscience. Villains can also be used to take out revenge on players or rehash old encounters. Remember that crazy wizard you sandbagged at level one?

For some reason, jail scenarios follow heist sessions, and with the new Waterdeep: Dragon Heist out what are some of your favorite prison stories?

Featured Image by: Waterdeep: Dragon Heist by Wizards Of The Coast

Image Credit: Orcs and Prisoner by Christopher Stevens, Chains of Blackmaw in Dragon #135, art by Chris Stevens and Omar Dogan