We love showcasing fantastic community stories from gamers all over the world! From the mother and daughter who bake boardgame-inspired cakes to the woman who uses gaming as medical therapy, there’s so many great gamers and communities with stories to tell. Here’s one of them.

At Anime Weekend Atlanta, 600 people crowded into a room only barely big enough for the crowd. The audience was here to see Send N00bz, a gaming-themed nerdlesque show where every performer came dressed as their favorite video game characters—and would leave undressed. This wasn’t just any burlesque show. It’s a show for—and made by—the fans.

Nerdlesque is a familiar if still nascent variation on burlesque shows. In typical burlesque shows, performers will do elaborate and artistic strip teases—or “peels” as they’re often called in the burly community—in a revue-style show. The nerdlesque variation on the art brings the performance to geekdom, where the sequins and glitter might adorn a stormtrooper costume. Burlesque is a generally inclusive subculture, inviting every body type and stage discipline into the show, so it’s a natural fit for a geek culture that champions your passion no matter how niche. It doesn’t matter what you look like or what you love, you’re welcome in nerdlesque.

That’s the idea anyway. Yet anyone who’s ever been frustrated with their fandom knows that ideals of inclusivity can fly out the window if they’re not vigorously defended. That’s why The FANdom Nerdlesque collective makes open contributions and communication top priorities. The collective is managed by a trio of performers, Désiré Èvoquer, Kali Fornication, and Sig Sawyer. Together, they form the three heads of the leadership team known as the Cerberus. 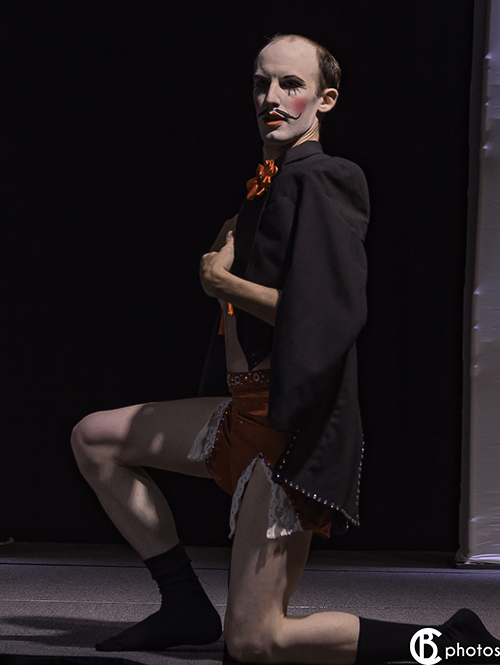 The Cerberus oversees an extended collective of over 170 members, with an estimated 45-50 active members who regularly contribute to shows. That’s a lot of voices who all want to express themselves on stage. Instead of dictating the show from the top-down, the Cerberus solicits pitches from the collective. Everyone is able to pitch an idea for an act in a show under a broad theme (like, say, video games). Of the dozens of pitches they receive, the trio examines which ones have a character and a number that best fit the show concept, and weave them together into a single show.

As Kali explains, the open pitch concept gives every show a fresh feeling, and gives an individual voice to every performer. “We encourage the performers to throw anything and everything at us… I’d say that generally performers pitch their personal fandoms the most, and we love it.”

This crowdsourced approach also gives them the flexibility to include members who might not otherwise have the opportunity to perform. The FANdom chooses acts based on the concept as its pitched, not necessarily the resume of the performer. “When a character that I really want to be in there is pitched by someone who’s not as experienced, we will partner them with a mentor,” Sig explains. “There’s been a couple gambles we’ve taken on people and they’ve paid off every time so far.”

One of those profitable gambles was Benjamin Unbutton. He got his start with the FANdom earlier this year at a Batman-themed showed called Under the Cowl, before moving on to play Sander Cohen from Bioshock in Send N00bz. Like most performers in the show, his choice of character was borne out of passion. “I love that game, I have it tattooed on my arm,” Benjamin explained. “It’s a character I wanted to cosplay for years.” Starting from his initial pitch, he worked with mentors from the collective—including Sig Sawyer—to refine the idea and get it ready for showtime. His eager ideas paired with the theater experience from his mentors and the Cerberus, transforms the act into one that elicits cheers from the AWA crowd. “Their feedback makes us better performers.”

Less formally, Benjamin also receives guidance from his “burly mom” Silver Kitsune. She’s been performing in burlesque troupes professionally across the Southeast and up the Eastern seaboard for eight years, turning it into a full-time job for the last two. There may be a disparity in experience between Silver and Benjamin, but there’s no gap between them on stage. Literally. During Send N00bz, the two performed back to back. Silver performed a Mass Effect number, peeling out of Commander Shepherd’s N7 armor, shortly before Benjamin took the stage as Sander Cohen. By sharing their experience, the more seasoned cast members elevate the new members to their level. 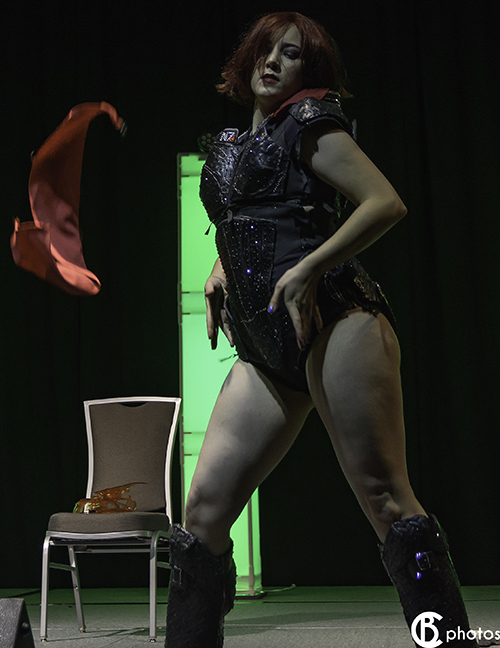 With so many different games and fandoms represented, how does the collective turn it into a coherent show? For most burlesque shows, there might be a host who introduces each act with a loose theme and calls it a day. The FANdom takes it a step further. Big shows like Send N00bz are scripted, with characters performing skits and telling a story in between each number.

The main character of Send N00bz is a young woman, the appropriately named Player One, who’s new to video games. She gets a tour through this new and exciting world from Mario and Luigi who, wouldn’t you know it, have lost Peach again. They need Player One’s help to search the various video game kingdoms to find her. In between each act, the performers put on a short skit. In one such scene (shown at the top of the page), Player One gets to “control” one of the fighters in Mortal Kombat. Though the “fight” might more closely resemble a dance-off.

Just how common are scripted shows like this? “They’re not,” Silver said. While they occasionally happen in some burlesque scenes—especially if you’re seeing a big production in New York or Las Vegas—something this elaborate for a smaller troupe in the local nerdlesque scene is relatively rare. Yet, the FANdom puts in the extra work because it gives performers a creative outlet they might not otherwise have. “Our collective is artists, it’s sound people, it’s videographers. You don’t have to be a performer to be a part of it,” Kali explained. Treating the show less like a simple burlesque revue and more like a stage show allows them to bring in geeks of every talent, fandom, and experience level to put on a show in which professionals and newcomers alike can shine.

Every performer chose their favorite game character for a musical number, but what’s yours? Tell us what character/song combo you’d love to see in the comments below!