by Dan Casey
A sharp, sudden shock overtakes your body. You take 11 points of piercing damage to your ribs. You can’t help but smile as you slide off your chair on to the floor, rolling around in a strange combination of joy and pain.  This isn’t the result of a skeletal warrior stabbing you with a rusty broadsword in a dank dungeon or suffering the withering blast of an onslaught of magic missiles launched by a malevolent sorcerer. Rather, this is the inevitable sensation you’ll have from listening to any single episode of The Adventure Zone: laughing so hard that it hurts.

The fan favorite Dungeons & Dragons podcast by the McElroy family isn’t just a repository for hilarious bits or outrageous one-liners; it’s also one of the most thoughtful pieces of improvised, serialized storytelling one can find nowadays. What began as a game of Dungeons & Dragons for brothers Griffin McElroy, Justin McElroy, and Travis McElroy, and their father Clint McElroy quickly evolved into something much larger than any of them had anticipated. The Adventure Zone became a cultural phenomenon, much like Geek & Sundry’s Critical Role, and spawned legions of fans who in turn created reams of fan art thanks to the delightful blend of high fantasy, hilarious hijinks, and genuine drama infused into each episode. 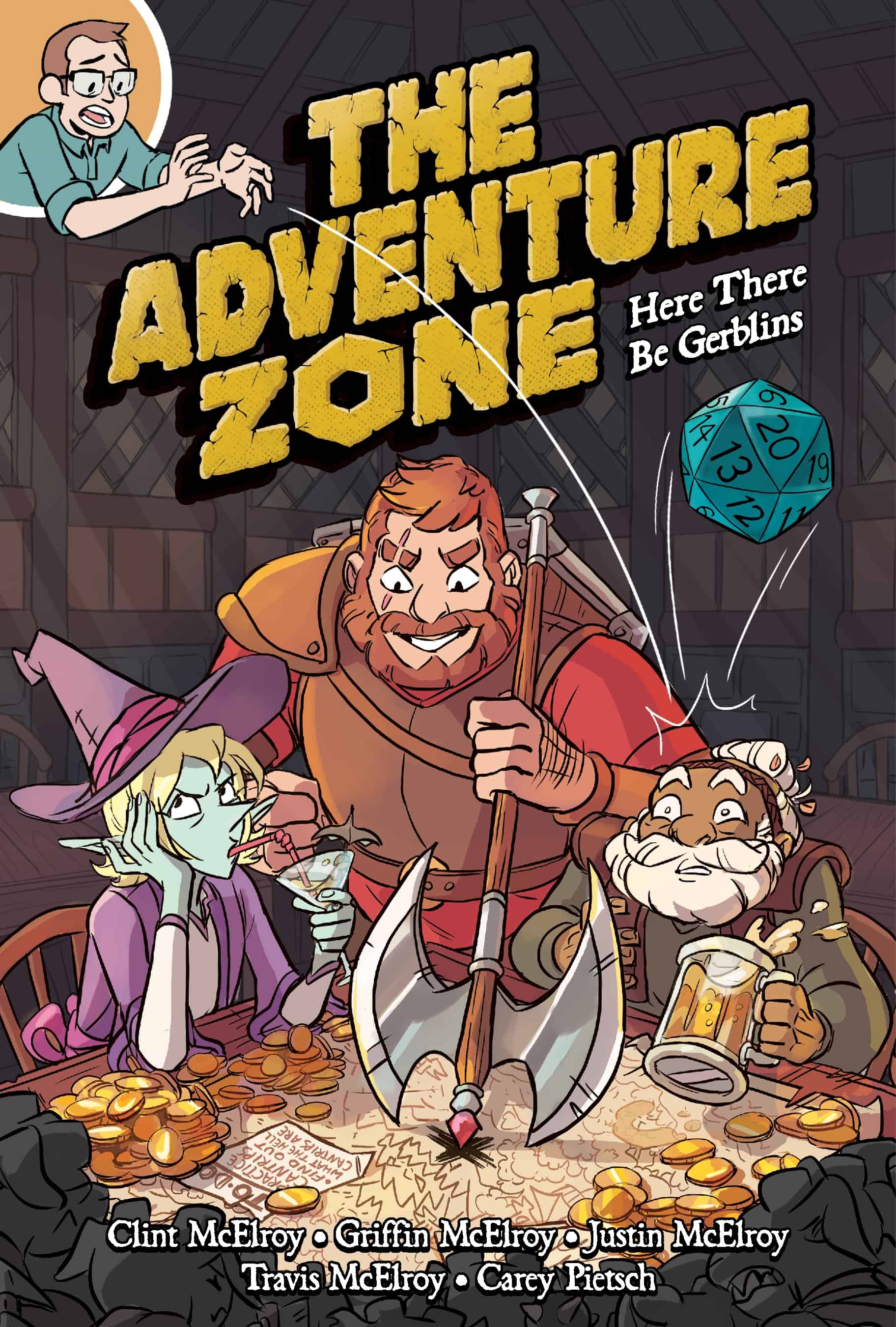 Nerdist exclusively announced back in 2016 that the acclaimed podcast would be leaving the Ethereal Plane that is audio and transforming into a graphic novel published by First Second Books and illustrated by Brooklyn-based artist Carey Pietsch. Now some two years later, the graphic novel adaptation of The Adventure Zone is finally here. The massive 250-page tome features an adaptation of The Adventure Zone‘s first story arc “Here There Be Gerblins,” which showcases our heroes–the effete elf wizard Taako (Justin McElroy), the surly dwarf cleric Merle (Clint McElroy), and the headstrong human fighter Magnus (Travis McElroy)–on their very first adventure. The graphic novel also boasts a foreword by acclaimed fantasy writer Patrick Rothfuss (The Kingkiller Chronicle) and a gallery of fan art submitted by the show’s incredibly talented listeners.

For the McElroys, the idea of turning their long-running podcast into a graphic novel was a longtime coming. “When we started talking about this, I think we were maybe two thirds of the way through the initial campaign, and we were so proud of the story that we made,” Justin McElroy told Nerdist.

Like any improvisational narrative, The Adventure Zone‘s story grew and evolved over time. By going back to the beginning and adapting “Here There Be Gerblins” for a new medium, it allowed the McElroys to smooth out some of their earlier storytelling. “With the graphic novel we were able to not just condense, because we were definitely doing that, but also sort of tonally and narratively bring it in line–the first arc of the show–with where The Adventure Zone: Balance ended up going, where the show ended up.” As someone who voraciously listened to all 69 episodes of the original campaign, believe me when I say that the way this show begins is drastically different compared to the twisting, turning path it takes listeners down. 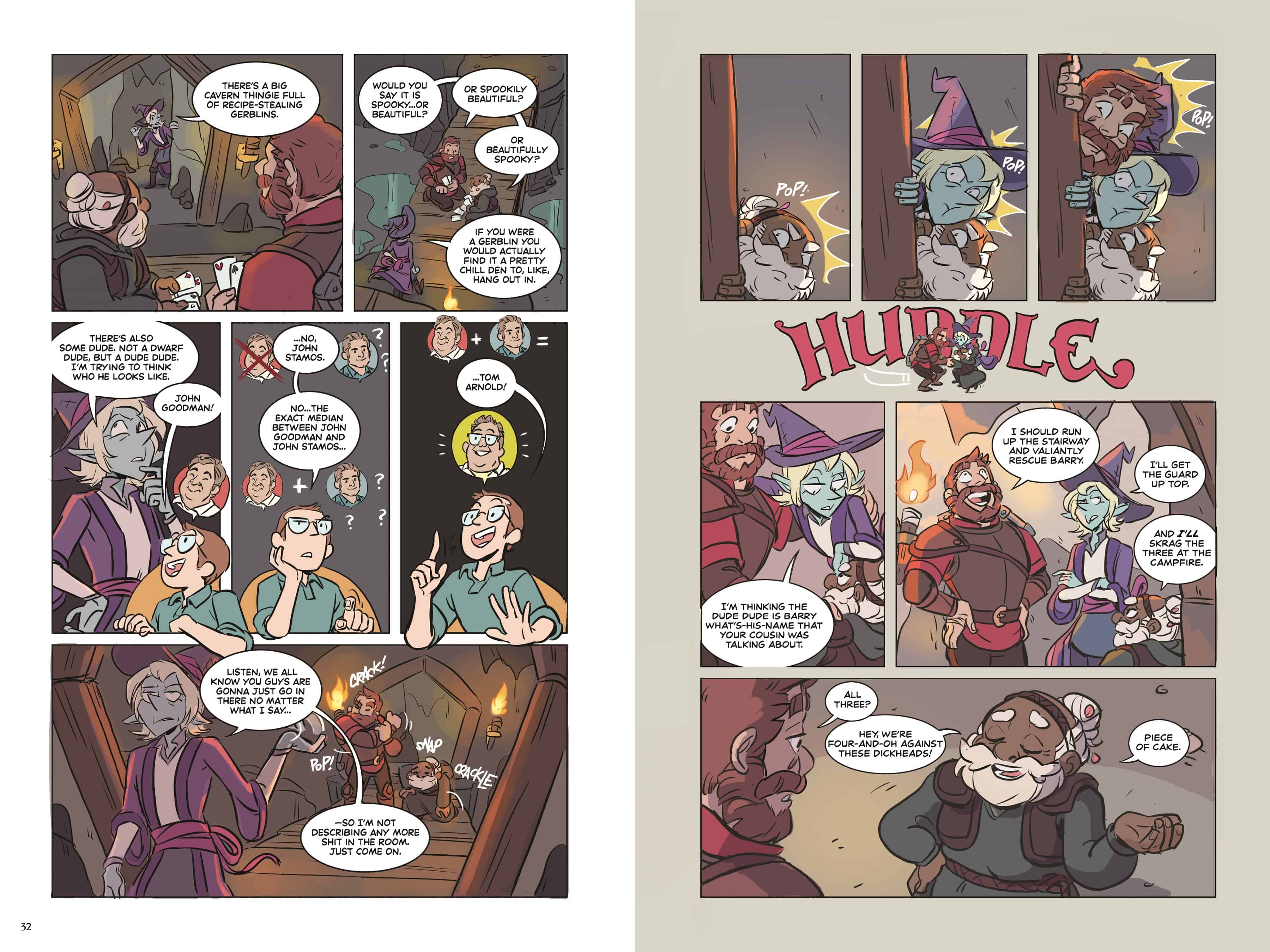 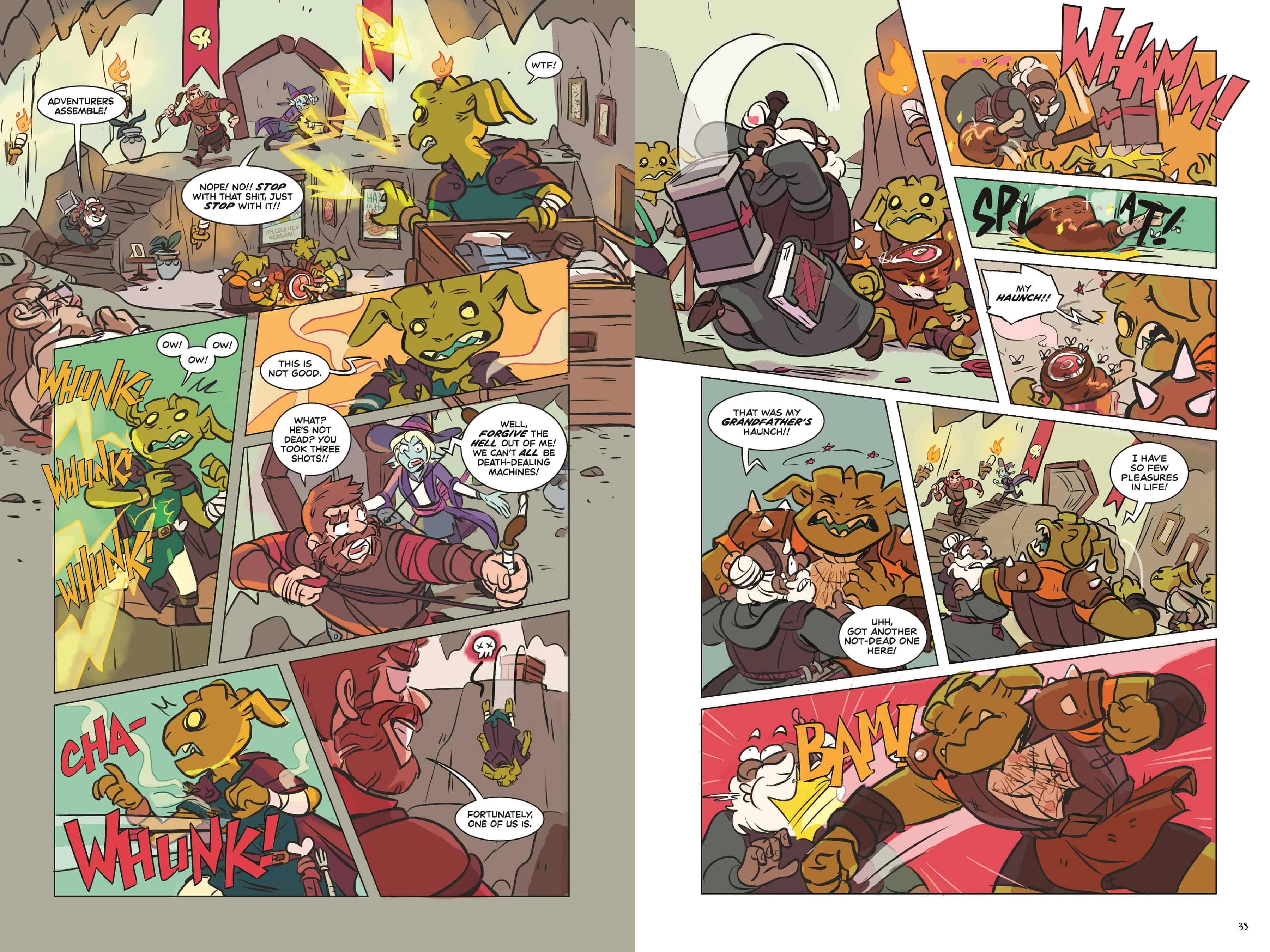 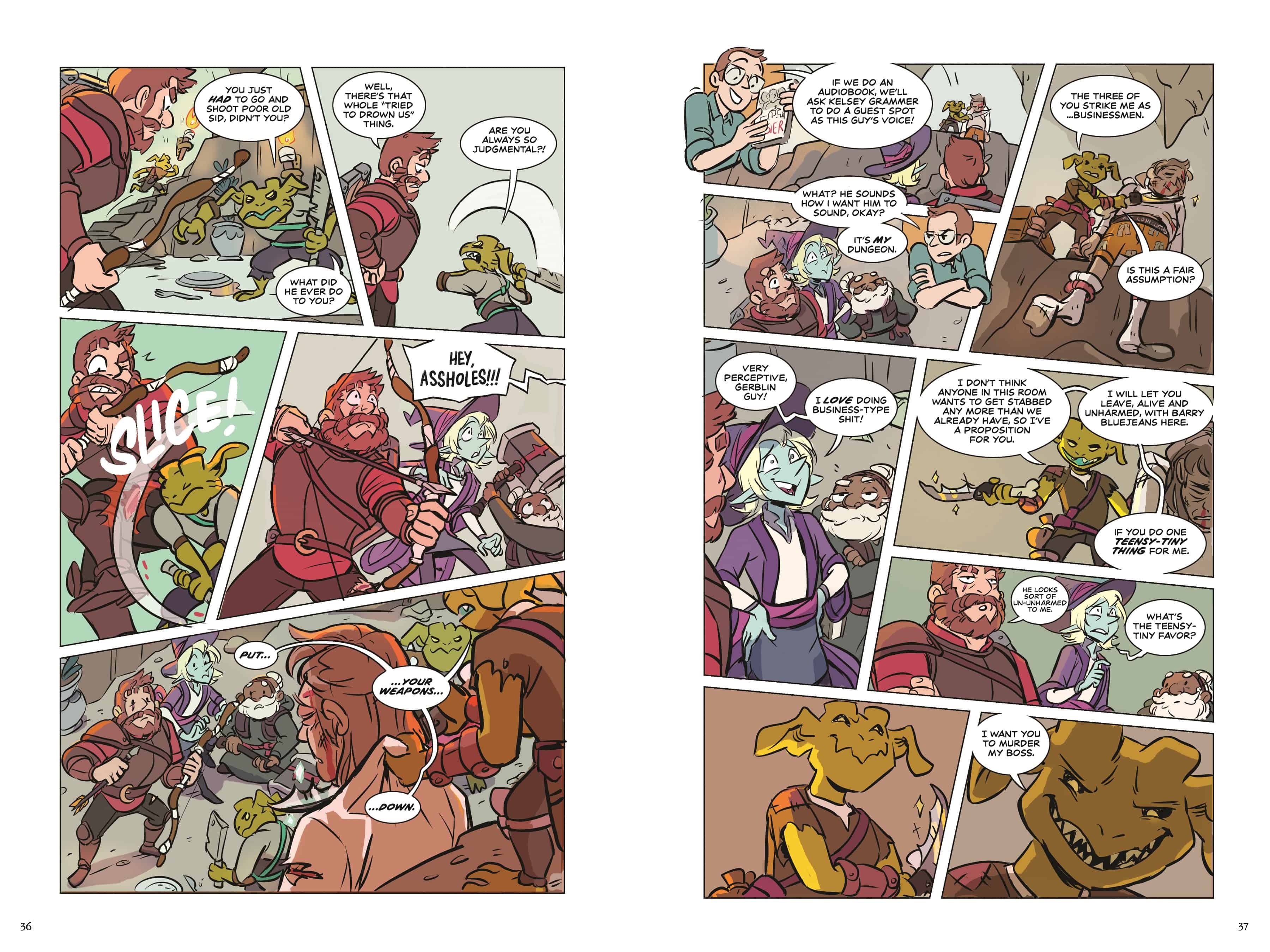 The good, good boys of The Adventure Zone
First Second Books
Anything but a vanity project, The Adventure Zone graphic novel also serves to bring series newcomers up to speed, immersing them in the world much more quickly than if they were to simply start listening to the series’ first campaign–known as The Adventure Zone: Balance–from the beginning. “If somebody wanted to get into the show or get into the story, they could start with this graphic novel, and get not only everything they needed to know, but get it in a really entertaining fashion,” Justin explained. “I just think it’s a really cool way of bringing people into this world.”

For the McElroys and Carey Pietsch, one of the most challenging aspects of the adaptation was figuring out how to preserve the dual dynamic of in-fiction storytelling and the feeling of friends and family gathered around a table playing a tabletop game together. Their solution? To have Dungeon Master Griffin McElroy pop up every now and again to break the fourth wall and move the story along as a sort of interdimensional, omniscient narrator.

“We definitely had a lot of conversations… talking through what the best ways would be to preserve the fun feeling of a tabletop game with getting hung up on showing you an actual dice roll,” Pietsch explained. “So instead we kind of landed on this. I mean I am biased, but I think it works really well to have these item sheets and character sheets and Griffin as a DM popping in to kind of give you the emotional stakes of that random element of chance without having to pause the story and action of the book to actually show you a die rolling.”

Keeping Griffin’s voice intact wasn’t just important from a storytelling perspective; it was integral to preserving the spirit of the podcast, according to Justin.

“For me, the show The Adventure Zone is the four of us. For me, I think you lose a lot of Griffin’s voice and what he sort of brought to the show [if you remove him from the story],” Justin explained. “I don’t think that we ever had any conversations with him in the book, with our characters talking directly to Griffin. I don’t think that much of that happened in the podcast itself, but this idea that the world was in some ways being shaped around the will of these characters, is I think so essential to the idea of an actual story, but also the potential to our thing. Because Griffin was the world, the world did respond to our actions, and I think having him appear as the DM is an effective way of getting that across.”

Like any Dungeon Master worth his salt, though, Griffin had a backup plan or two because any and all best-laid plans in a D&D campaign inevitable get laid to waste the moment they come into contact with the player characters. 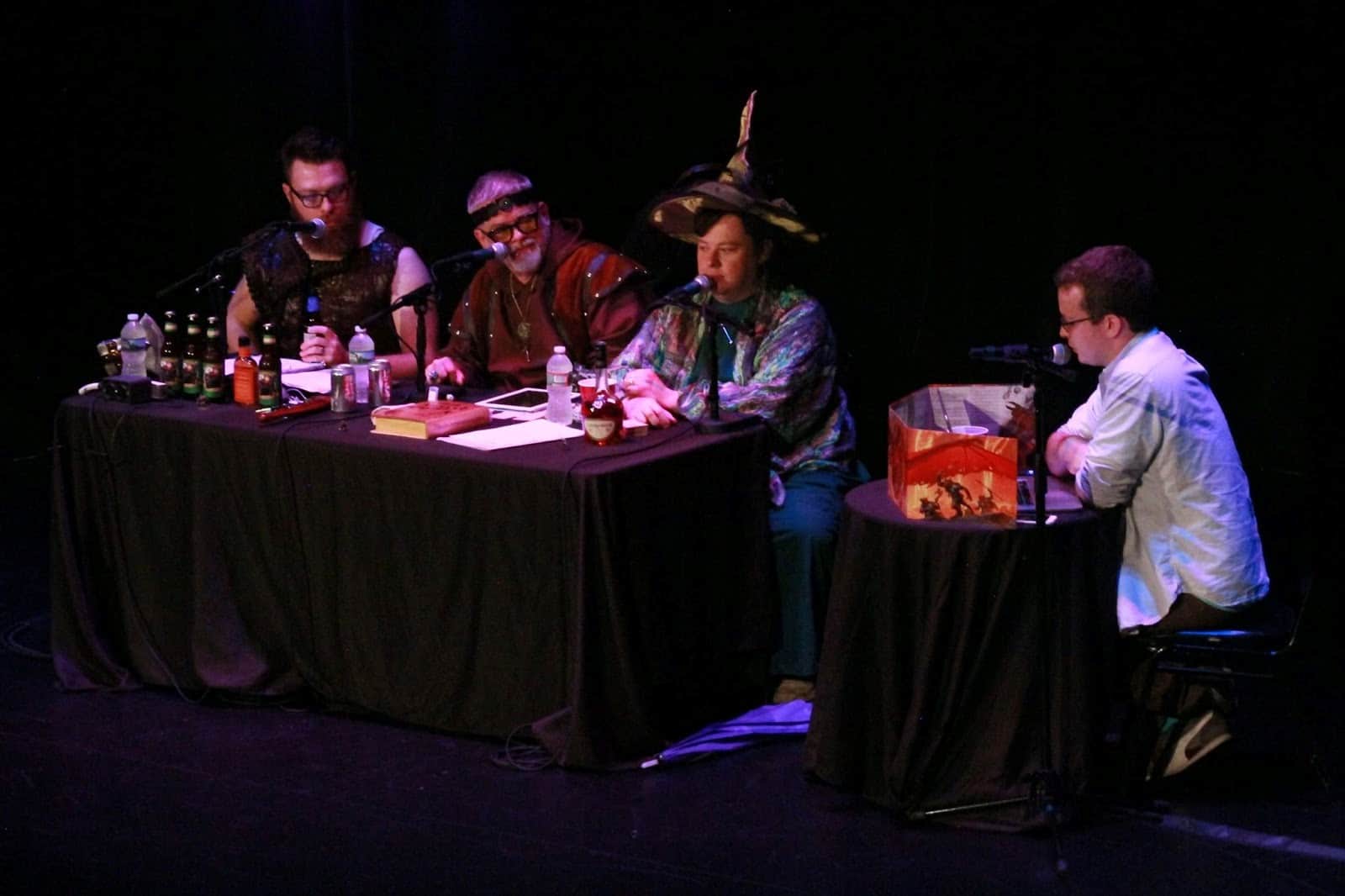 “I think we had talked about two other versions. One that was just the story without this idea of tabletop happening behind it, which would have been convenient in some ways, but in other ways loses too much of the circumstances behind the actual recording of the podcast,” Griffin told Nerdist. “I think we did enough of that in the story as is to sort of maintain the tone of The Adventure Zone. Then we had also talked about, very very briefly, including Justin and Travis and Dad, as characters who would pop up and there would be some sort of focus on the table play element of it, but that conversation I don’t think lasted very long either, because it would almost double the length of the book, which apparently would have been very bad. But also, it would have been hard to build momentum with the story that we were telling if we had to constantly jump back and forth between the real world and the game world. What we ended up with is a good hybrid that sort of maintains the way that we recorded the podcast while still able to barrel on through and just focus mostly on the story that we told.”

“Something I do remember is very early on we talked about a couple different ways to implement having the DM on the page,” Pietsch noted. “I don’t remember if it was just me and Clint chatting or if it was the whole crew, but I think we tossed around the ideas of a literal Griffin figure actually wandering in, like freezing time and walking through the background of a scene, or maybe he would possess some of the other NPCs, and I don’t think we ever figured out a way to execute it.”

“Yeah now that you say that, we did have–this is so stupid, that’s why we didn’t do it–but we did have an idea, I remember that you said that, every NPC sort of looking like Griffin, and they would all have Griffin’s glasses or something,” added Justin.

To close our our conversation, I lobbed a total softball: Why do you think we’re experiencing such a profound spike right now in the popularity of Dungeons and Dragons and roleplaying games as a storytelling tool?

“Us. That’s my whole answer, I think it’s us. You know you see us get a lot of success and everyone wants to come along and get on this gravy train,” Justin deadpanned. “You see Nerd Poker, Critical Role, I’m sure there’s others that have come along in our wake. I’m so happy to have been able to blaze a trail for them. I would love a cut on the back end if that’s something that they’re so inclined to do.”

Given that he is the chief storyteller behind The Adventure Zone, Griffin McElroy put it best:

“If I were to hypothesize, I think it’s a few things. I think it’s one of those weird things that starts showing up in lots of stuff, almost like, what’s that word for when people invent things simultaneously without talking about it? That idea. The new edition of Dungeons and Dragons is very good and also doesn’t require you to go out and spend a bunch of money on miniatures and tilesets and a whole bunch of stuff. You can do it in your mind’s eye. We could not have done The Adventure Zone without fifth edition, so that probably contributed to it.

“I think the biggest thing is how sort of the media landscape has changed to sort of empower independent creation. And I’m talking about, you know, the rise of YouTube culture, I’m talking about the ubiquitousness of podcasts as they have grown, combined with the fact that D&D has always been, before anyone was doing shows about it, a really really interesting way to create a story. That’s why people have always played it, and that’s something that I didn’t really appreciate. I didn’t start playing D&D really in earnest, I played a little bit of fourth edition like in 2010 or so, but I really didn’t play it in earnest until the podcast because I just thought it was a fun albeit complicated kind of game. I didn’t appreciate it for how rewarding it was to create a story with your friends.

And so that’s always been true, and then you combine that with how easy it is now to then put that story in front of other people, and I think that it’s unavoidable that we would start seeing a lot of shows like this based around this really really fun, unique way of creating a story, then transmitting that story to whatever audience you can grow. I think it was only a matter of time before this trend started to grow. But then again, I have no idea what I’m talking about.”

The Adventure Zone: Here There Be Gerblins is available from First Second Books on July 17, 2018. You can listen to the podcast on MaximumFun.