How Teach Your Game-Averse Friends to Play (and Love) Games

We’re counting down the days International Tabletop Day 2018, happening this year on April 28th! As we get closer to the big day, we’ll be looking at the gamut of tabletop gaming, from the stories of the games we play to remarkable people who love them. Be sure to join in on the fun on April 28th on our official ITTD Twitch Stream, hosted by Ivan van Norman and donate to charity:water, the worthy cause we’re supporting this year.

Everyone has a friend (or several, if you’re the odd one out) who doesn’t like playing board games. You invite them to game night and they never come–or if they do, they don’t seem to enjoy themselves very much. While you may want to write them off and say, “Games just aren’t for them,” it may be worth rethinking your strategy. Maybe they have just had bad experiences playing with impatient people. I know from my own personal experience, I have trouble focusing on listening to directions – I have to physically play a round before I get it. Everyone has a different learning style, but you also have to take into account the types of games you’ve chosen, the level of difficulty and how to best explain the rules.

A lot of the time learning the rules can be overwhelming. Constantly stopping the game to go over the rules bogs down game play and can make newcomers feel like they’ve already lost because they don’t know what they’re doing. Here are some ways to make introducing new games more palatable to people who don’t typically enjoy playing games.

Start with the Objective

I can’t tell you how many times I’m at a game night and someone starts explaining the game starting with the minutiae first. You have to grab your audience – tell them what they want to win. What is the goal? What is the objective? How will they reach that goal? Is everyone against each other or will they have to cooperate with everyone and make alliances? The key is to not overwhelm. Start broad, catch their attention, then move on to the nitty-gritty.

Don’t Overwhelm with the Details

Of course, after you tell them the broad stuff you have to get into the details like the game pieces, the turn order and types of actions. Try your best to tell this in the most general way possible. While you may feel compelled to start giving strategy tips or talk about meta-gaming, save that for the actual game. If you start philosophizing on how best to deceive your opponents during Coup, they’re going to quickly lose interest.

Do a Practice Round

Now, instead of going straight into the game, why not try a simplified or shortened practice round? Sometimes it’s easiest for new players to get how the game works with a low-stakes, hands-on round. You can play a few rounds with simplified rules or even play with open cards so everyone can see the different options they can expect when the real game starts. This is a good time to give some strategy tips if people are receptive to it.

Give Them Some Agency

Once you’ve played a practice round and moved on to the real thing, remember that new players have their own ideas and strategies about this game, even if they aren’t an expert. Let them follow their intuition and make them feel like they are in control of their turn and their choices. Nothing is more annoying than trying to tell a new player how to play their turn. Give them a sense of autonomy so they can become invested in the game. Sit back and worry about your own strategy. If they ask for advice, then you can jump in. 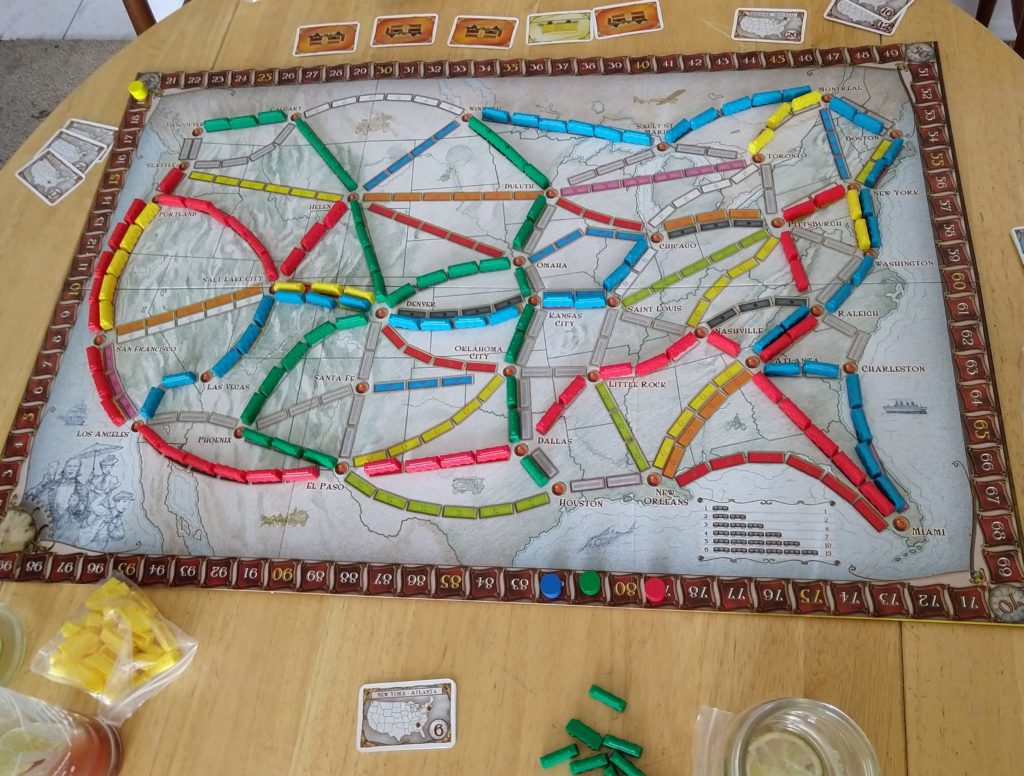 An important thing to remember when trying to get your friend to enjoy games like you do, is to cater the game to them. Is this just a one-on-one session or group hang? What themes or elements of pop culture is your friend interested in? Do they like sci-fi or fantasy? Then choose a game that will bring them into that atmosphere like Tiny Epic Galaxies. Do they like art or visually appealing games? Then pick something they will love to look at like Photosynthesis. The more you can do to entice them, the easier it will be to get them invested in the game.

So there you have it, some general tips to help you convince your game-averse friends that it’s not that they don’t like playing games…they just haven’t found the right game yet! The world of games is so vast, there is so much variety it is virtually impossible to not find a game for everyone.

So tell us about your experiences introducing games to your non-gaming friends. What games did you use to convert them? Tell us in the comments! And be sure to join us on April 28th on Twitch for our International Tabletop Day stream hosted by Ivan van Norman, and help us support charity:water to raise money for a project to get water to a community of people who currently lack access to clean water.

Inside this Mysterious White Box Contains the Makings of You...

5 Games to Play While Waiting in Line at Conventions

Wizards of the Coast Announce New Storyline: Tomb of Annihil...

Apply Pixar’s Storytelling Lessons For Your Next RPG S...