How This FLGS Brings Together Gamers of All Stripes - Nerdist

How This FLGS Brings Together Gamers of All Stripes

In the heart of Grand Junction, Colorado, you’ll find The Jester’s Court, a FLGS owned by Trudi Wagner. Trudi didn’t start out with the intention to be a game store owner, but her kids’ love of Pokémon started her on a path that would lead her to bringing together people of all backgrounds together for one common passion: Gaming.

Trudi started playing games when she met her husband, and they introduced their kids into the hobby with Pokémon. After running their first game store from 1998 to 2002, she and her husband sold the store and moved to another state, but never lost their love of the hobby. Fast-forward to 2011 and one fateful moment.

“My husband Sean is at the local comic shop buying a graphic novel, and sees a box of Magic the Gathering sitting on the counter,” Trudi says. “A girl in line behind him notices… and tells him about the Magic tournaments at the mall.” With no nearby game store for players to gather, they’d spent the last couple of years running tournaments in a mall conference room.

After learning about their situation, Trudi says, her husband joked with her, “‘We should open The Jester’s Court again. It’s really sad that these guys don’t have a place to play.’ And five weeks later we were open for business—again.”

Giving gamers a welcoming space to play has been an important focus of The Jester’s Court ever since. 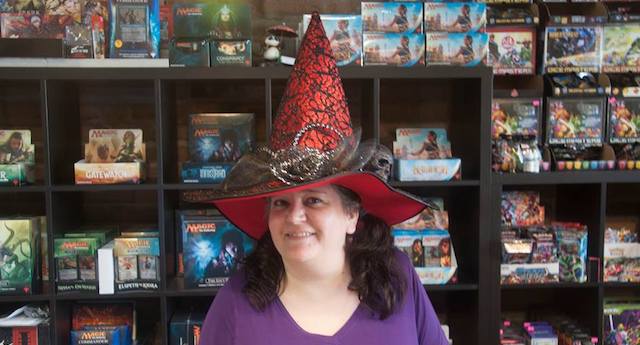 Trudi recalls one customer in particular that exemplifies their dedication to bringing gamers together.

“One day a high school kid wanders in, we’ll call him Josh,” she says. “It’s obvious that Josh is one of cool kids, part of the in-crowd at school, and he’s just in the store killing time.” The art on the Magic cards catches his eye, she says, and he ends up buying a deck after she teaches him the basics.

“A couple of days later, two of my regulars, we’ll call them Jake and Lance — who are not part of the in-crowd at school — walk in and see Josh sitting at a table playing Magic with me,” Trudi says. After recognizing Josh, they hesitate at the door, but he turns and invites them to the table.

“The three of them start talking about Magic, and suddenly it doesn’t matter that Jake and Lance don’t sit at the cool kids table in the cafeteria,” Trudi says. “None of them cared about the social hierarchy imposed by their classmates… And in that moment an unlikely friendship emerged, all because of a game.”

Trudi’s generosity and passion for teaching others how to play games to get them hooked on the hobby is an example anyone can follow. “Gamers are the most genuinely kind people I’ve ever met,” she says.

Visit The Jester’s Court on Facebook for more information about the store and its regular community events in Grand Junction.

Have you forged an unlikely friendship at your FLGS? Tell us about it in the comments.

All Photos: The Jester’s Court