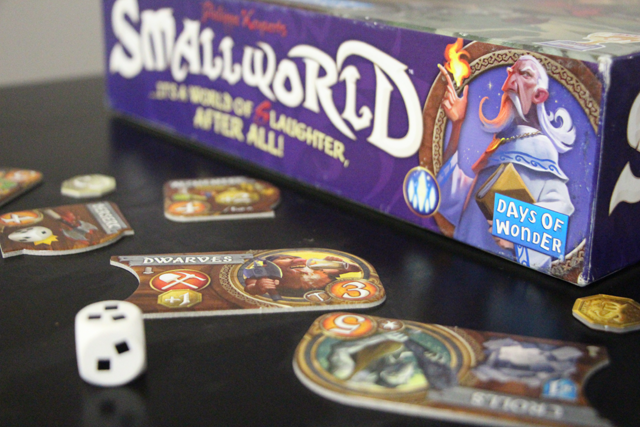 House rules have always been a part of most board games – even Monopoly has a tradition of player-created variants. Homebrew rules help players enjoy a new dimension to a game, adjust it for varying player skill with or improve replay by keeping things fresh.

Given that Small World was the first game played on Tabletop, it seemed most appropriate to start by sharing some of my favorite home brew rules for this game.

Small World is a very popular game in my gaming group (as you can tell by the worn corners of my copy) and as such it’s played often and competitively. This variant simply means we just play on a map for a group of players one size smaller. A 5-player game is played on a 4-player map, but with the same number of turns as the 5-player game.

This variation means a fast and furious gameplay experience. Fewer regions means more competitive conquests, and it also significantly decreases the likelihood a single player will continue to rack up victory points, even with the most favorable race combinations.

The flipside to this variant is to go one-size bigger, which is great for playing with children or for families playing together.  The game becomes significantly less conquest focused, and other skills, like counting, reading, turn taking, and strategic play can be developed, rather than forcing confrontation.  It’s especially great if you’re in a house with rival siblings, as they’ll learn fast that being down each others throats will hurt them in the end, as others take over the board.

This variant increases the cost to players for skipping available races when selecting a race. Instead of paying a single point for each race you skip, you pay 1 point for the first race, 2 points for the second race, and so on and so forth. These points remain on the races and can be claimed with the race when it is selected.

Early skips are relatively cheap – picking the 3rd race available only costs 1 more victory point. But digging into the most recently revealed race is especially costly to a player. The taxation system encourages players to play with less-optimized combinations and rely on their own wits to make the best of what they have. It also decreases the cost of skipping races for subsequent players. With this taxation system, a player has the same incentive to take the second available race as the first if both were skipped by the player before them, which gives them more options despite being faced with options that were less desirable to the player before them.

There’s also the strategy of points denial and how this progressive tax system runs counter to that strategy. By dumping more points onto a skipped race you’re effectively putting those points in another player’s pot, effectively doubling your losses to that player. 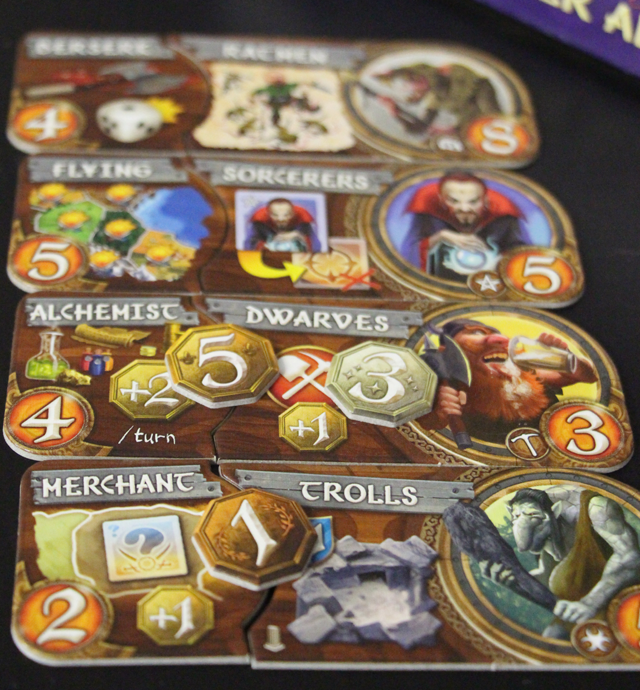 After five players have skipped over Alchemist Dwarves in various positions, that heinous combination suddenly looks quite attractive.  Do you skip over them to take Berserk Ratmen? Or Flying Necromancers? Difficult strategic choices make for fun games.

This variant leverages the hateful reinforcement die enclosed to determine the fate of the game. At the end last marked turn on the board, roll the die. Whatever number shows is how many additional turns of the game are played, which are between 0-3. The die itself has 3 blank sides, with the other 3 sides showing a 1, 2, and 3, meaning equal odds that the game will continue as it will end as normal.

Playing with variable game length adds an additional luck element that, when combined with a player’s own skill, can turn the outcome of a game in their favor. Not knowing the end of the game is part of the fun; decisions that would be easy to make knowing a game’s definite end is at hand may be less sound when there’s  a fair chance the game will go on.

What do you think of these homebrew variations? Do you have any Smallworld house rules of your own? Share them in the comments!

Keep your eyes peeled for more homebrew rules from Teri here on GeekandSundry.com!

For more content from Teri, check out her YouTube Channel for videos about tabletop and miniature wargaming.
YouTube.com/ThatTeriGirl