It’s time for another round of home brew rules! This time, we’re looking at rule variants for Cool Mini Or Not’s Zombicide!

These game rule variations are great for any edition of the game and can add an additional layer of challenge or make the game more palatable for newcomers.

AFTER YOU, GOOD SIR (OR MADAM)

In the core rules of Zombiecide, players take turns in a clockwise fashion. In a cooperative game, sometimes it makes more sense to just go in a logical order. It’s nice to have the person with the fire axe smash open doors rather than have all the survivors wait in the street, exposed to the zombies until it’s that player’s turn. If you can hold your action in D&D, it only makes sense to be able to do so in Zombicide. 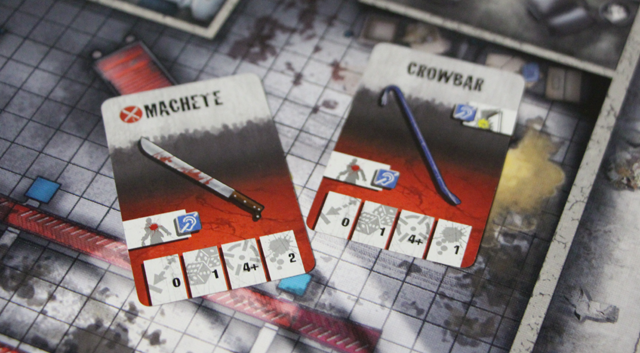 The mechanics for items can be somewhat clunky. Searching for an item is a risk (as a zombie can appear when looking for a useful item) but once you’ve found a gun in a room, why can’t you leave it on the ground? In the core rules, if you drop an item, it disappears into the ether. With this variant, you can leave things on the floor for a companion to find. They’ll still need an action to pick it up, but at least they’re not shuffling about to find an item that you’ve already found and can pick it up at a later time.

FRIENDS DON’T SHOOT FRIENDS IN THE FACE (EXCEPT BY ACCIDENT)

While Zombicide: Black Plague has addressed this thoroughly hated rule, the original core rules still state that if you shoot into a space with mixed model types (survivor and zombies), the survivors take the bullets first.

Stealing from the Black Plague ruleset, it might just be a better idea to assume shots that miss (a dice roll below the required hit value) hit your friends, while successes will hit the zombies, in the zombie priority order.

This variant obviously does not affect Molotov cocktails, because they just kill everything in the space it’s tossed in. If you’ve managed to invent a target specific Molotov cocktail, let us know.

EATERS OF THE FLESH

Let’s assume zombies like to eat human flesh, and will stop pursuing any prey if a nearby all-you-can-eat buffet opens up.

In the case where a survivor dies in a space with another survivor, once that player dies, all zombies within that space stop to eat the flesh of the fallen survivor. Moreover, because this newly minted martyr has sacrificed themselves valiantly for their friends, any survivor in that square gains the special rule “Slippery” for the following turn, letting them make a quick and quiet escape.

Every Zombicide scenario includes an approximate time length the game should play in. Instead of using that as a guide for the game, consider it the amount of time you have before your extraction window closes.

When you start the game, just start a timer; players either win or die by the clock when it hits 0:00, at which point, everyone is considered dead anyways. This is the perfect variant for when you have a slower player who hesitates every turn, slowing down the fast and furious gameplay for everyone else around the table; there’s pressure to think quick and move quick: almost as if it’s a zombie apocalypse.

AS QUIET AS THE DEAD

I love this variant when there’s a special bossypants who tends to dictate to the rest of the group how the game should go. (The game can be played in a single player variant if they really want that much control.) This is also a great variant to use along with the After You, Good Sir variant rules above.

This homebrew rule is simple: in order for two players to speak to each other to coordinate efforts, their survivors must be able see each other, the same way zombies are able to see survivors. Furthermore, if a player is in a different room/street space as another player and wishes to communicate to them, they earn a noise token. They are yelling across a distance, after all.

Are you a Zombicide player? What do you think of these variations? Let us know in the comments below!