History of Thrones: House Gardener and The Kings of the Reach - Nerdist

History of Thrones: House Gardener and The Kings of the Reach

History of Thrones is our series that examines important historical events and people from the complex and controversial past of  Westeros. Now that HBO has announced their first  Game of Thrones spin-off pilot will take place thousands of years earlier, during the Age of Heroes, we’re turning our third raven eye to that mythical that began to shape the Seven Kingdoms into what we know it as today. If you think legends reveal too much about the truth, you might consider them spoilers.

HOUSE GARDENER AND THE KINGS OF THE REACH

Aegon Targaryen brought blood and fire to Westeros, but he also brought mercy to anyone who bent the knee. However, one ancient house was just as powerful as the kingdoms of the Starks and the Lannisters for thousands of years, but they never got the chance to swear fealty in exchange for survival, because the Field of Fire extinguished the mighty House Gardenerforever. But no history of the Realm can be told without them, because while Aegon ended their dynasty forever, their legacy lives on. 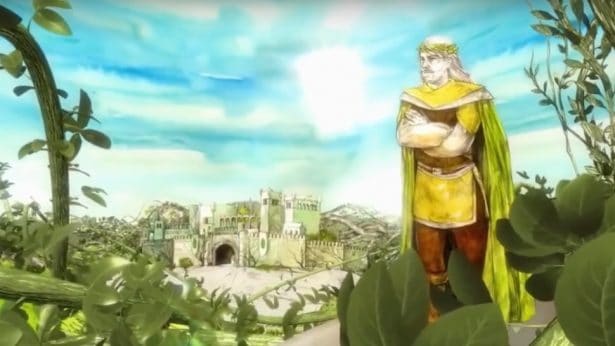 Like most great houses of the Reach, House Gardener traced their line back to the legendary Garth Greenhand, though he is not credited as being their founder. That title belongs to his oldest son and the first King of the Reach, Garth the Gardener, who ruled during the Age of Heroes when many other great families were also founded.

Garth the Gardener, who wore a crown of vines and flowers, was said to rule from his home at the top of a hill on the Mander River, which eventually became the most beautiful castle in all of the Seven Kingdoms, Highgarden. He sat on the famed Oakenseat, a living throne from an oak tree said to have been planted by Garth Greenhand himself, which was the seat of Gardener power until it was destroyed by a Dornish force thousands of years later. Controlling the Reach–which also ruled over Oldtown and House Hightower, and counts houses Tyrell, Tarly, Fossoway, Ashford, Redwyne, Florent, and many more among its sworn bannermen–made its kings especially wealthy and powerful. It is the most fertile land in the Realm, producing large quantities of Westeros’s food and some of its best wines. Over thousands of years, the Gardener Kings expanded their lands, which grew to be the second biggest kingdom in size (behind the North), the second wealthiest (after the Lannisters and the gold mines of the westerlands), and one its most populous, which made it a massive military force. This was useful with so many enemies–most notably House Martell of Dorne and the old Storm Kings–surrounding its valuable lands. It’s no surprise the Reach’s history is one full of famed knights and warriors who fought in the Gardeners many battles. Unlike most of the other kingdoms, House Gardener did not go to war with the Andals when they invaded. After strengthening their position and preparing for war, they instead welcomed the Andals into the Reach–even making the Andal House Tyrell their loyal stewards. Eventually the Reach adopted the Faith of the Seven and the Andals chivalric traditions. They also promoted Andal craftsmanship, supporting the work of their blacksmiths and stonemasons, and they fortified their castles and weapons by using iron instead of steel. For thousands and thousands of year from the Age of Heroes until Aegon’s arrival, the Kings of the Reach of House Gardener, whose sigil was a greenhand on a white background, were as powerful as any other rulers. Their dynasty is full of notable and great warrior kings, like Gwayne the Gallant and Garth Goldenhand, while other rulers, like Gwayne V Gardener, are remembered for their wisdom. The Kings of the Reach could achieve success through both war and diplomacy.

Until they met Aegon.

After seeing how he had brought some of the other kingdoms of Westeros to heed, King of the Rock Loren Lannister and King of the Reach Mern IX Gardener joined their armies for the first time in thousands of years to face him together. Their “Iron Fist” force of 55,000 men (with far more of them being bannermen of the Gardeners) was five times larger than Aegon’s at the time, which was mostly made up of houses that had only recently sworn fealty to him. The two kings were confident that like most battles fought throughout the history of Westeros the larger force would prove victorious. And they were right–three dragons beat zero dragons.

Loren survived and bent the knee on behalf of House Lannister, and the Kings of the Rock became Aegon’s Wardens of the West. Mern never got that chance though, because he was killed on the infamous Field of Fire when Aegon and his sisters unleashed the flames of their three dragons for the first and only time. Mern burned along with all of his male family members, including his sons, grandsons, brothers, cousins, and even all of his knights in the sacred fighting force the Order of the Green Hand. Thousands of years of rule, thousands of years of power and strength, thousands of years of being one of the most important families in the Realm, all lost in a matter of minutes, gone forever.

All that’s left of House Gardener are the families who also trace their bloodlines back to Garth Greenhand, and what the history books tell us about them. The Reach was given to House Tyrell by Aegon, after the Gardener steward Harlen Tyrell surrendered to him on behalf of the kingdom. When Harlen rose from his knee he was the new Lord of Highgarden, Lord Paramount of the Mander, and Warden of the South. On Game of Thrones House Gardener is hardly a shadow–though that shadow grew larger when Daenerys Targaryen burned the combined forces of the Lannisters and the Reach in season seven. They are a reminder that no family, no matter how powerful or strong, can still vanish in an instant. But on the prequel, set back during the Age of Heroes when the White Walkers first attacked, they were as important as the Starks or Lannisters. They were as mighty as the Storm Kings and the Iron Born. And just like now, they controlled the breadbasket of Westeros, which is never more important than when winter has arrived.

What do you think? How important will House Gardener be in the prequel series? Record your thoughts in the Citadel of our comments section below.