A group of North Bergen High School students in New Jersey got everyone’s attention and admiration last month, when they presented a stage adaptation of the 1979 classic Alien. And soon they will be performing an encore presentation in honor of the fourth annual Alien Day on Friday, April 26th at 8PM ET.  Their first performance caught the attention of both the star and the director of the original film, Sigourney Weaver and Ridley Scott.  Scott was so impressed in fact, that he pledged funding for a special encore presentation of the student play. 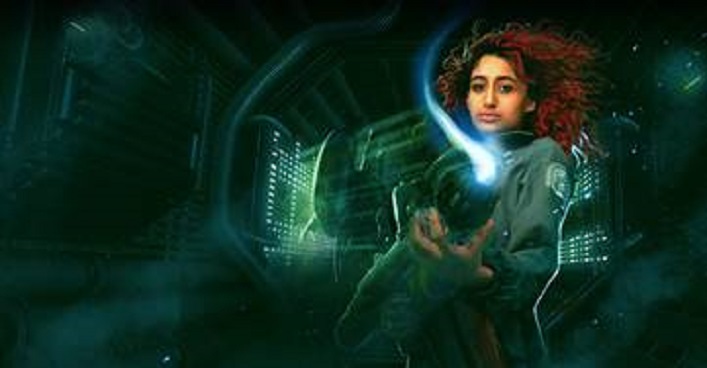 This special performance is one more activity surrounding Alien Day on April 26th when devotees of the Alien franchise will assemble again for the 24-hour worldwide celebration. Those eager to participate can share their own personal memories or recreations of their favorite moments for a chance to become part of the 40 Year legacy;  click here for more information on #MyAlien40th celebration.

UPDATE: 03/28/2019
The news and video of a bananas high school stage production of Alien took the internet by storm earlier this week. It not only captured the attention of fans everywhere, it also drew the eye of the 1979 film’s director, Ridley Scott, and Ellen Ripley herself, Sigourney Weaver.

Scott sent a letter to the students and theatre faculty–on official Scott Free letterhead, no less–praising the ingenuity and resourcefulness of North Bergen High to put on such an ambitious play on a minuscule budget. He says that kind of teamwork and cleverness is what the U.S. is all about, and he even said Scott Free will donate some money for an encore performance. And maybe even their next production–Gladiator, if he were to make a request.

Here’s the full letter, via Deadline: 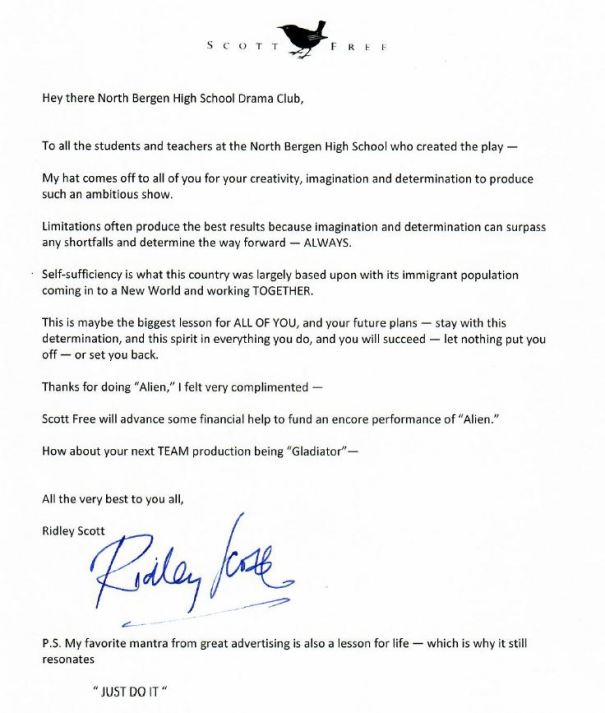 Weaver took to the official Alien Anthology Instagram account to post a video appreciation of Alien: The Play, and passed along words of praise and congratulations from James Cameron, director of the sequel Aliens, and the original film’s co-screenwriter, Walter Hill. Legends, all.

Students at North Bergen High School in New Jersey recently put on an AMAZING production of Alien. Hollywood noticed. And so did… the Queen. . . . . #Alien #SigourneyWeaver #RidleyScott #NJ #NorthBergenHighSchool

It just goes to show that people who have a passion for something can pull off the unthinkable through, as Scott says, “imagination and determination.” We hope it goes on tour so we can see it!

ORIGINAL REPORT
High school plays are usually the classics. A little Grease here, a little Our Town there. Maybe if they decide to be edgy, a school might perform Dracula. But to go truly out of this world, a school decided to perform a rendition of Alien.

New Jersey’s North Bergen High School just raised the bar for school plays by staging a version of the original 1979 Ridley Scott classic Alien, complete with an H.R. Giger-esque xenomorph suit that puts some of the best cosplay at any comic con to shame.

I love that north bergen high school did alien last night as their school play, so I’m gonna keep tweeting about how great it is..everything was made from recycled materials .. so nuts amazing I’m so proud of my hometown pic.twitter.com/EEMEbankDz

One of the coolest aspects of the production design was that everything was made almost entirely out of recycled materials. According to a report in NJ.com (via CNN), one of the high school seniors who worked on the sound crew, Justin Pierson, told reporters “This is going to sound really funny but (the set crew used) garbage essentially. Just anything that was lying around like cardboard and metal.”

Video and images from the play went viral this weekend, as sci-fi movie fans everywhere gasped at images showing up on social media, many no doubt remembering how hard it was to just make a 16th century village look decent in their high school production of The Crucible.  These kids, on the other made the SS. Nostromo look incredible. Hopefully we’ll see more creative plays inspired by these innovative high schoolers.