Heroes of Red Hook: Cthulhu Stories with an Inclusive Twist

H.P. Lovecraft is well known for his cosmic horror and betentacled monstrosities that have been haunting humanity’s dreams since 1916. The unfortunate truth is Lovecraft was racist and classist and many current Cthulhu RPGs focus on straight, white, male characters. Oscar Rios, editor and founder of Golden Goblin Press, loves the Cthulhu mythos but rejects the prejudicial overtones. He has created a new fiction anthology, called Heroes of Red Hook, that focuses on minorities, immigrants, women, characters with special needs, and members of the LGBT community. The title of the collection itself is a play on Lovecraft’s Horror at Red Hook, which is touted as Lovecraft’s most bigoted story.

Heroes of Red Hook is a rebuttal of everything that story stands for. According to the Kickstarter:

“We here at Golden Goblin Press reject their message and their ignorance, as we stand up and try to guide our genre towards a more inclusive future. We see the mixing of races, cultures, genders, and orientations not as a negative, but as mankind’s greatest strength. These are not shadows to be fearful of but our brightest light guiding us to a more enlightened tomorrow. Together we can change the legacy of Lovecraft, from one of blame, fear, and bigotry, into something more representative of our greater humanity. We know that one little book won’t solve the problem in our genre, but maybe it can be a nudge in the direction it needs to move coming into the 21st century.” 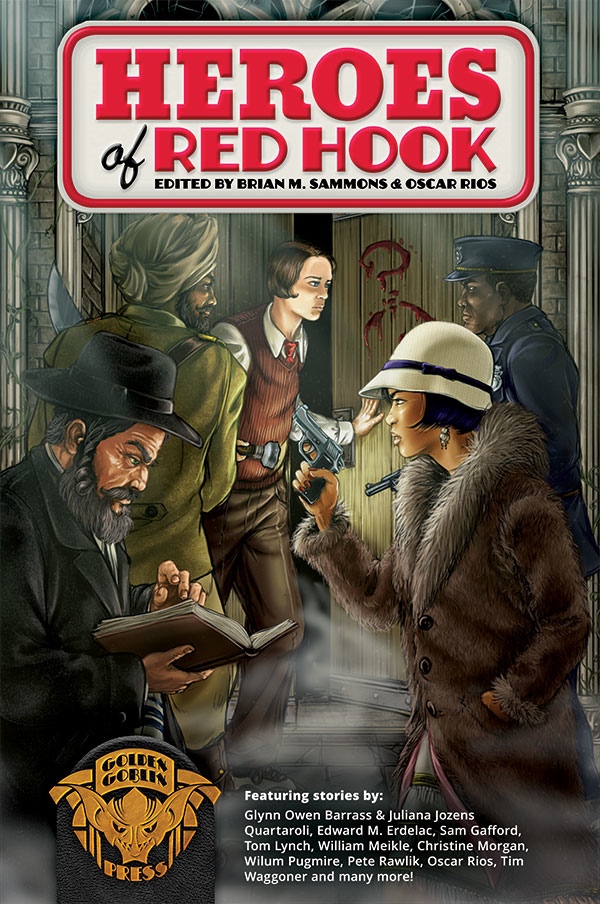 I spoke With Oscar about Heroes of Red Hook, his company, and this new collection.

What is Golden Goblin Press?

Oscar Rios: Golden Goblin Press is a small New York based publishing house that produces Cosmic Horror fiction collections and supplements for the Call of Cthulhu Role Playing Game. They are named after the fictitious Golden Goblin Press, a creation of the author [Robert E.] Howard.

Previously you have Kickstarted Cthulhu RPG supplements. Why do a fiction collection this time?

For the last two of our four RPG Kickstarters, we offered companion fiction collections as stretch goals; Tales of Cthulhu Invictus for De Horrore Cosmic and Dread Shadows in Paradise for Tales of the Caribbean. With those two successful books produced, we decided to launch an independent fiction line, one which would produce stand alone cosmic horror fiction collections.

What inspired you to create a collection about immigrant, minority, female, LGBT, and other outsider protagonists?

For a long time, every interview I read or listened to about Cosmic Horror in general or H.P. Lovecraft invariable turned to a discussion of the inherent racism and sexism in the genre. While we agree that all of these criticisms are valid, we wanted the genre to be defined by more than just that one small–and quite negative–aspect. Our desire is to help shape the future direction of the Comic Horror genre by presenting a collection of stories with heroes and heroines coming from the ranks of those groups typically presented as, at best, the villains in such stories, or at worst completely ignored and never depicted at all. To us, and many people like us, the struggle is between all of mankind and the forces of the Cthulhu Mythos, not just a narrow, very specific segment of the population. We want to show the members of all mankind, from every race, gender, ethnicity, religion, and orientation fighting against these dark forces.


Thanks to Oscar for taking the time to discuss his exciting new collection. It is awesome to see these under-represented groups as focal points for a book like this. If you are interested in learning more, you can find details on the Heroes of Red Hook Kickstarter page.

How do you think more gaming and literary genres could be more inclusive? Do you know of role-playing systems that make a point of being diverse? Let us know in the comments below!