The Witcher‘s first episode ended with an amazing—and heartbreaking—showdown. Renfri and her men forced Geralt of Rivia into a battle he didn’t want to fight. We didn’t want to see them in a showdown to the death. And the ending still makes us sad. But it did look amazing, so we loved every second of it. The sequence featured a long continuous shot, dynamic camera movements, skilled choreography, and incredible hand-to-hand combat. It also told an amazing story. The result wasn’t just one of the best fight scenes of the season; it was one of the best fight scenes we’ve ever seen. And despite having re-watched it more times than we should probably admit, we now have a whole new way to appreciate it. In a new video from Netflix, star Henry Cavill breaks down how they made that bloody clash come to life.

There are two aspects to what makes The Witcher‘s fight in the streets of Blaviken so compelling. The first is the technical side, which Cavill breaks down for us shot by shot. It starts with Geralt coming face-to-face with Renfri’s men. That sweeping, 360-degree camera angle of him easily swatting away an arrow from a crossbow lets the viewer know just how powerful and quick he really is. From there it’s one long, uninterrupted take as he slices and dices his way through each of them, leaving a gruesome and bloody trail of death in his wake.

And Cavill did it all with half a “sword.” A full replica, even dulled, would have been too dangerous to risk getting that close to someone. The chances of cutting another performer or even a member of the crew would have slowed the whole sequence down. Without the cameraman being so close the fight wouldn’t have been as intimate and engrossing. But as Cavill points out, only fighting with half a sword comes with its own challenges. You have to ignore your natural instinct to finish your blow, lest you either hurt someone or ruin the shot. Even great CGI can’t mask that kind of mistake.

But there was so much more to worry about than just his own performance. If a camera or stunt man was even slightly off their mark the entire sequence had to start over. That would be taxing on an actual witcher. It was all worth the time, effort, training, and repeated attempts though. The payoff was incredible.

It only means something, though, because the fight also tells a story. 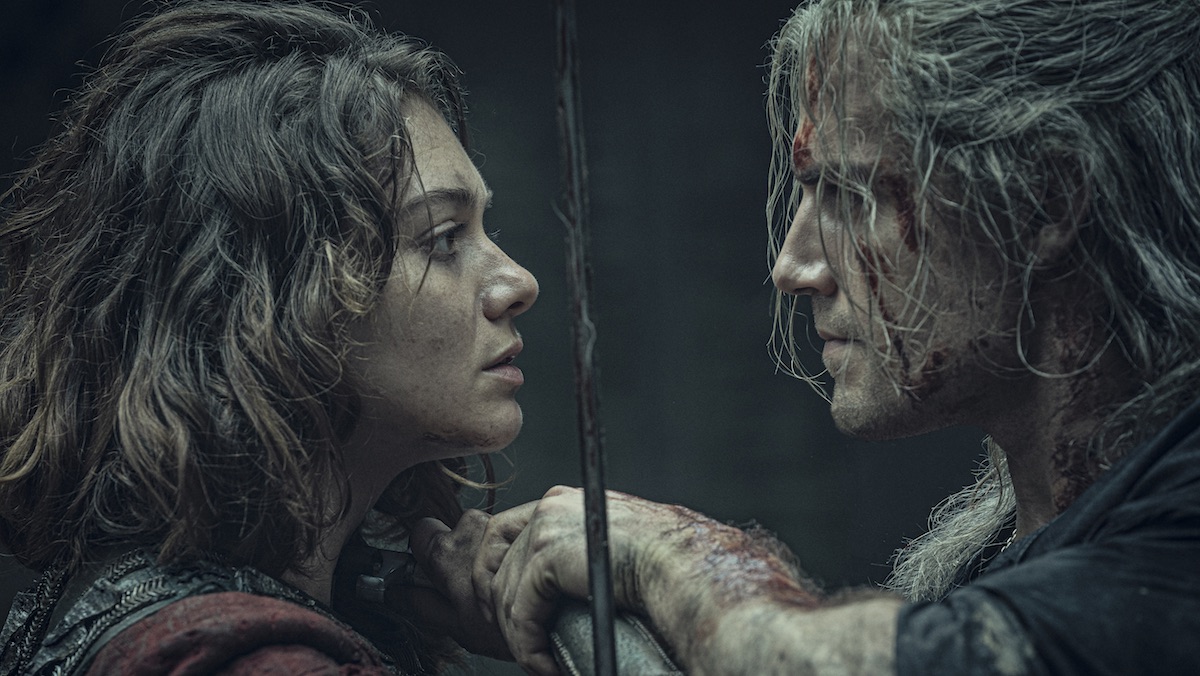 The Butcher of Blaviken was not a moniker Geralt deserved. Renfri forced him to do something he desperately wanted to avoid. She was attempting to make him choose the “lesser” of two evils. At least that’s how she presented it. As Cavill explains in this video, Renfri’s goal in forcing him to fight her wasn’t simply about making him kill Stregobor. She was ready to die herself. Geralt obviously wanted to avoid that. He refused to fight back at first, and then when he did, he easily won. Rather than kill her, though, he gave her a chance to walk away.

Renfri refused. Geralt only struck her down when he realized it was his life or hers.

It was haunting and sad, and we wish it never happened. But it sure did look amazing. And knowing how the show made it happen only makes us appreciate it more.