The First HELLBOY Trailer Is Not What We Expected - Nerdist

The First HELLBOY Trailer Is Not What We Expected

We’ve all been eagerly awaiting the arrival of more news about the David Harbour starring, Neil Marshall helmed buff Hellboy movie since they debuted some footage to a lucky audience at New York Comic Con earlier this year. Well, today we have been treated the to the first wide release look at the new vision of Big Red, and let’s just say it’s very different from the R-Rated horror flick the Neil Marshall and co. had been promising.

We’d been told that the film was leaning into the horror elements but this trailer presents the film as far closer to a Deadpool or even Guardians of the GalaxyÂ movie, as Hellboy plays like a cranky comedy character (very much like Ron Perlman’s version). What’s more, the cheery notes of Billy Idol’s Mony MonyÂ throw us into what feels like a pretty par for the course comic book movie trailer. This will surely disappoint some fans who have been looking forward to the blood-soaked R-rated horror movie that the production have been talking about, but we can’t discount the success of Deadpool in shaping just what a modern day R-rated superhero movie looks like. 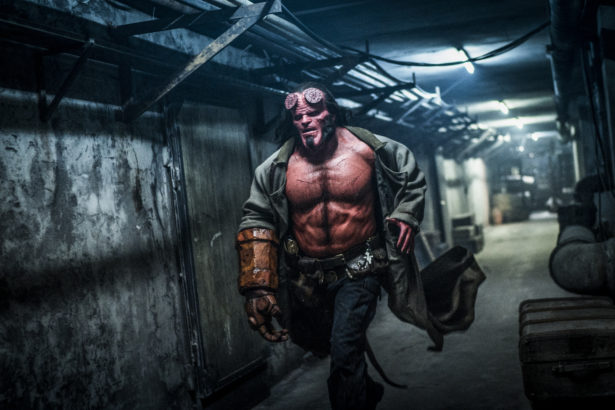 We get more comedy beats than action, but there are hints at a wider more fantastical story as we see Big Red joining the B.P.R.D and reconnecting with Professor Broom as an adult. That dynamic change seems to be an interesting one as Hellboy’s close relationship with Broom is often the emotional core of the comics and previous films, so we’ll be interested to see what they do with that. We also get our first proper look at Milla Jovovich’s Blood Queen too, who seems to have nefarious plans including Big Red who we see wielding a flaming sword and some impressive horns. We get a few flying creatures too and even a little bit of gore, but overall this is definitely much closer to the MCU/Fox superhero flicks than we were expecting.What could it all mean? We’ll have to wait until April to find out if Hellboy will deliver the gothic horror goodness or be an unexpected R-Rated cape comedy.