Vans has been a reliable purveyor of pop culture-themed kicks for years now. The company has given us casual footwear designed to celebrate the likes of Marvel Comics, classic Disney cartoons, NASA, Vincent Van Gogh, and plenty of other pillars of geek-friendly fanfare. But such a catalogue is incomplete without representation of one of the most beloved pieces of fiction to make its mark on the literary, cinematic, and theatrical worlds this century: Harry Potter.

Before you get too jazzed, there hasn’t been an official announcement yet that Vans will be releasing a Harry Potter-themed shoe and accessories line, much less what these articles will inevitably look like. But we got the next best thing: a tease of the very same from Vans themselves. The company graced Twitter on Tuesday with a message suggesting that we admirers of all things Hogwarts should keep our eyes open wizarding wafflestompers.

SERIOUS WARNING: Any readers who suffer from photosensitive epilepsy may want to avoid activating the below tweet.

At this point, we have no further information to answer the various whats and whens we have buzzing around in our heads, so all we have is our imaginations to get us through until Van drops the word (and, more excitingly, pictures) properly. That said, we can make some educated guesses; for instance, if Vans plans to operate as it did with its Marvel line, it may be releasing distinct sneaker styles corresponding with different Harry Potter characters. If that’s the case, we’re excited to find out whom we can expect to be represented. All we know is that any Hagrid-themed shoes ought to come in extra extra extra extra extra large, and Moaning Myrtle kicks had better be waterproof. 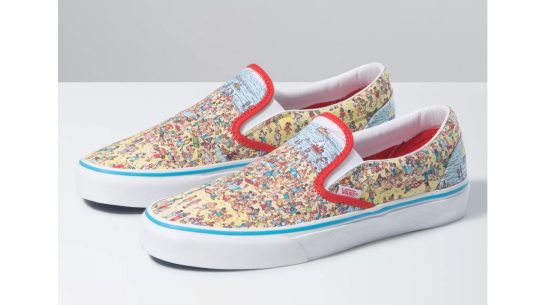