Disney hasn’t been shy about using CGI to de-age actors in their films, like with Kurt Russell in Guardians of the Galaxy Vol. 2 or Carrie Fisher in Rogue One, but they didn’t go that way withÂ Harrison Ford for Solo: A Star Wars Story.Â It would have likely been a challengeÂ to have a performer in their 70s play themselves when they were in their 20s for an entire movie. But if you wonder what it would have been like to see the original scruffy nerf herder in his pre-rebellion days, a deep learning A.I. program has shown us what it would have looked like. It automatically put Ford’s face in the movie, and it looks really good, especially forÂ Alden Ehrenreich.

This video (that we first saw at io9) comes from YouTube channel derpfakes; they used an artificial intelligence program to do advanced image processing using photos and images to create a catalog of poses and looks. It then automatically inserts the actor’s face into a scene, like it did here with Ford’s face in a number of Solo scenes that still have Alden Ehrenreich’s voice.What this video makes clear is that Ehrenreich pretty much nailed it with his mannerisms and reactions. Harrison Ford’s face matches up perfectly with his young replacement’s performance, and you can really see how he both embodied the role while making it his own. 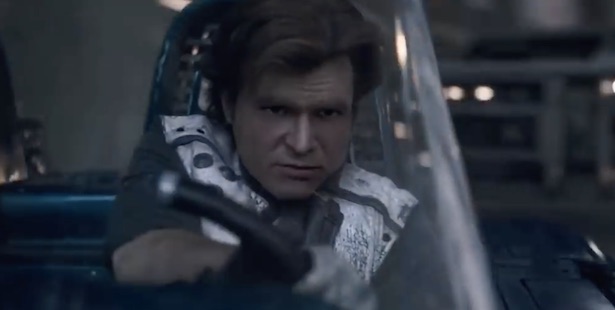 This was cool to see (and makes the whole Superman/mustache fiasco that much more inexplicable), but not because it showed us what Harrison Ford would have looked like in Solo, but because it highlights we already knew.What other movies and with what other actors would you love to see this A.I. program applied to? Tell us in the comments section below.