It’s Team Hooman’s Anniversary! That’s right, Team Hooman is one year old as of today. If you don’t know what Team Hooman is, don’t worry. I sat down with Allyson (TorontoGal), one of the most active leaders in the Team Hooman community, to get you the origin story.

Allyson has been a member of Team Hooman since its beginning. She’s an active moderator for the Twitch channels Team Hooman calls home and can always be found in the chat, on G&S’s website, or on Twitter promoting the work of Geek & Sundry and other hoomans. Allyson is truly the embodiment of hoomanism.

So, Allyson, what is Team Hooman?

From my perspective, Team Hooman is a fantastic example of how a community can showcase the virtues of the online world.  Participants are people from different countries, varied cultures, and from a wide range of age-groups.  A large and diverse set of people who use kindness and inclusiveness as a connective tissue.  Each day, I see members of Team Hooman signal-boosting charitable acts, churning out creative works, spreading word about things they love, and being there for one another in times of need.

How did Team Hooman get started?

Like many cool things, Team Hooman arose when Felicia and Ryon were willing to take a risk and try something outside their comfort zone. Ryon had been a long-time fan of Twitch, and would often try and coax Felicia into trying video-game streaming. Back in September 2014, the siblings ended up being out of town at the same time, and on a whim, they setup an impromptu Twitch stream where they engaged in some on-the-air co-op hi-jinx. They immediately fell into a fantastic rhythm of including fans in their fun!

After enjoying their first Twitch adventure they scheduled additional streams. And as they did, Felicia and Ryon interacted with the fans, and the fans also connected with one another. Each stream had a welcoming nature and the warm easy-going vibe of a gathering of friends. There was a charming grass-roots feel to it all. During one stream, Felicia and Ryon were playing a horror game named ‘Damned’, where Ryon was playing a monster that was hunting down other player-controlled characters. As he was on the prowl, he’d amusingly call out, ‘Oh Hoomans! Where are you?’ And that funny little riff ended up becoming the adopted name for the fan-community!

The existence of our community owes so much to Felicia and Ryon being such down-to-Earth, warm, and caring people. Their genuine appreciation their audience created a fantastic atmosphere and the audience took that kernel of community spirit and grew it into an open and welcoming online group which focuses on being supportive.

The addition of the ambitious Geek & Sundry Twitch channel gave us a plethora of new content, along with a family of fantastic cast and crew. And this caused the Team Hooman community to increase even more. Since its humble beginnings, the community has continued to be a lovely beacon of fan positivity 🙂 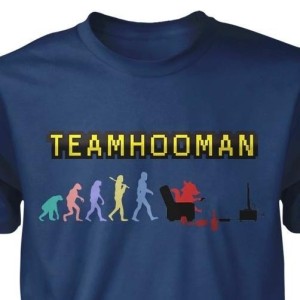 What does it take to be a hooman?

A guiding principle of the community is that if you’re a good-hearted fan, you’re already a member of the team.  No membership required.  The focus is on being welcoming, inclusive, and supportive.  And in the turbulent waters of the web, that is a fantastic safe haven to help nurture. Often times, there are spaces online that are vehemently negative. Our community makes it a goal to be proactively positive. I’m always humbled and proud of all the wonderful things that the G&S/TeamHooman community has accomplished!  I feel lucky to be a small part of it! <3 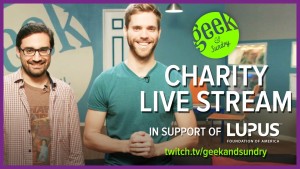 Allyson, like many hoomans, downplays her active part in the community and how important she has become to so many of us. Team Hooman members continually share, retweet, reblog, and highlight the work of other members in the community. They are genuinely excited to hear what’s going on in other hooman’s lives and enthusiastic to show their support. Team Hooman members come from all walks of life and will stand by you, encourage you, and accept you just the way you are. Being a member of Team Hooman has allowed me the opportunity to make friends from all over the world who accept and like my zany self. I would have never known these awesome people existed if it wasn’t for the accepting attitude of Team Hooman.

Team Hooman has also helped raise thousands of dollars for various charities. Members have bought Felicia’s book for each other, purchased Twitch channel subscriptions for those low on funds, sent Geek and Sundry shirts to each other, and more. This community is comprised of members who actively give of themselves without a second thought. These are people who, when I offhandedly remarked that I was craving chocolate, told me to put it on my amazon wishlist and then bought me chocolate. Their generosity astounds and inspires me every day. I’ve been a member for 7 months and love every moment I get to spend with Team Hooman. 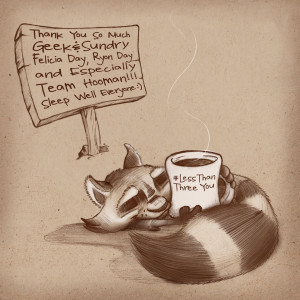 Team Hooman is a community in every sense of the word. They support and encourage each other every day to be better humans. To be hoomans. Consider checking out the Team Hooman Facebook Group, website, or Felicia, Ryon, or Geek and Sundry‘s Twitch chats to join this amazing online community.

Team Hooman is celebrating their anniversary with Hoomanism week, a week long celebration of helping and supporting others. Tweet out your act of #Hoomanism and let others know how awesome this community is.


Thank you everyone who contributes to #Hoomanism and happy anniversary Team Hooman! Here’s to many more years!