Hands On With Resident Evil 2 - The Board Game - Nerdist

Hands On With Resident Evil 2 – The Board Game

I still remember the first time I played Resident Evil. I was far too young, but a cool older cousin called me chicken so I swore I could handle it. I couldn’t. I was spooked and never returned to that horror-mansion outside of Raccoon City. Perhaps due to that early play, I largely skipped the Resident Evil series of video games. I’m familiar with how they work and I’ve seen people play them but until I demoed the new Resident Evil 2: Board Game from Steamforged I had never actually visited Raccoon City myself.

I am a big fan of Steamforged miniatures game Guild Ball so was excited to sit down to take a look at this upcoming title. RE2 will not be their first video game-board game translation – they’ve published Dark Souls which raised well over $4 million on Kickstarter – so they have some experience bringing beloved IPs to the tabletop. There are some big differences between board games and video games however, so my hope was to play the game and figure out what they were keeping from what I know of the series and what they were throwing out.

The defining word of the demo was tension. I played with Steamforged co-founder Mat Hart in a demo lead by designer Sherwin Matthews and they both repeated throughout that the goal was to capture the tension and rising horror of Resident Evil 2. Based on my short demo, I’d say they succeeded. There was pressure, uncertainty, but most interestingly a novel resource management system that managed to capture some of the same feelings I get playing survival-horror video games.

The game presented itself as a seemingly standard dungeon crawler, only the dungeon is the streets of Raccoon City. I played rookie cop Leon Kennedy while Mat took on Claire Redfield. Right from the start things were different from most dungeon crawlers I’ve played: we didn’t start together. This mission was to work separately to find the key to the police station and meet up in the parking lot to enter together. Mat explained that this was done – in part – to capture the feel of working alone even while seated at the table with friends. 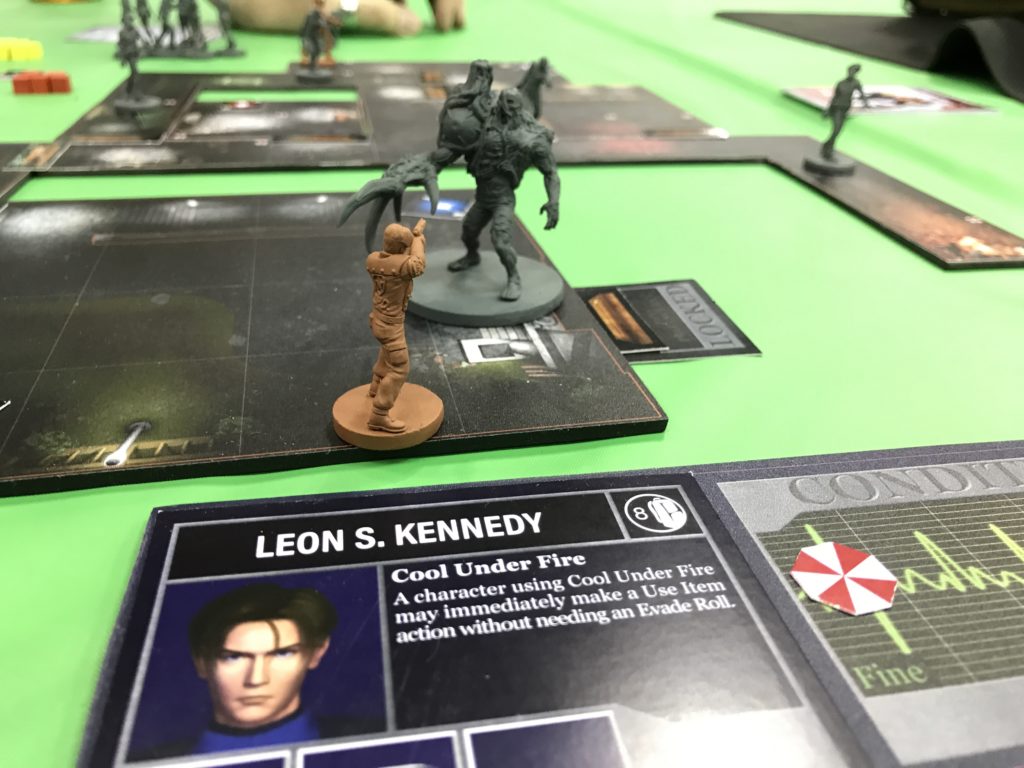 It works. I began the game staring down an alley at two zombies. These are classic walk-slow-and-bite-you zombies, devoid of any of the powers or abilities that seem to be creeping into the genre. Their threat is as much their presence as it is any real physical danger. Taking an action while sharing a space with them means rolling a few custom dice to evade and if you succeed, you’re free to act or move away or whatever you need to do. Ammo is a precious resource so there isn’t really a need to put them down. Or so it seems.

My first few turns were pretty standard. I moved past the zombies, preferring to save my pistol ammo, and began exploring. In homage to Resident Evil’s loading screens, tiles are separated by doors and opening them sees you rolling on a table to potentially spawn more undead. On top of that players will draw from a rather thin deck at the end of each turn. Most of the cards were “All Clears” but from time to time we drew events that would call back to moments from the video game or add a bit of ambiance and potential danger. One card described shuffling sounds around the corner and forced Mat to back track a few spaces or risk alerting whatever was making the noise. Others forced us to draw multiple cards, hastening the end of the scenario and increasing the risk of failure.

This deck is what delivered a lot of the tension. It’s a timer and thus delivers an inherent tension but it also is full of surprises that laced each draw with a moment of dread. Concerned about an upcoming run in with a giant monster I opted to take a few extra rounds searching for a shotgun; I had to carefully weigh that decision against drawing an extra 2-3 cards in the process. You also have to be careful going back to eliminate zombies or waiting for your teammate to show up because of the ticking time bomb you’re drawing from each round. Sherwin mentioned that future campaign scenarios will see players backtracking through levels akin to the video games,making that decision to ignore zombies now one that might bite you later. 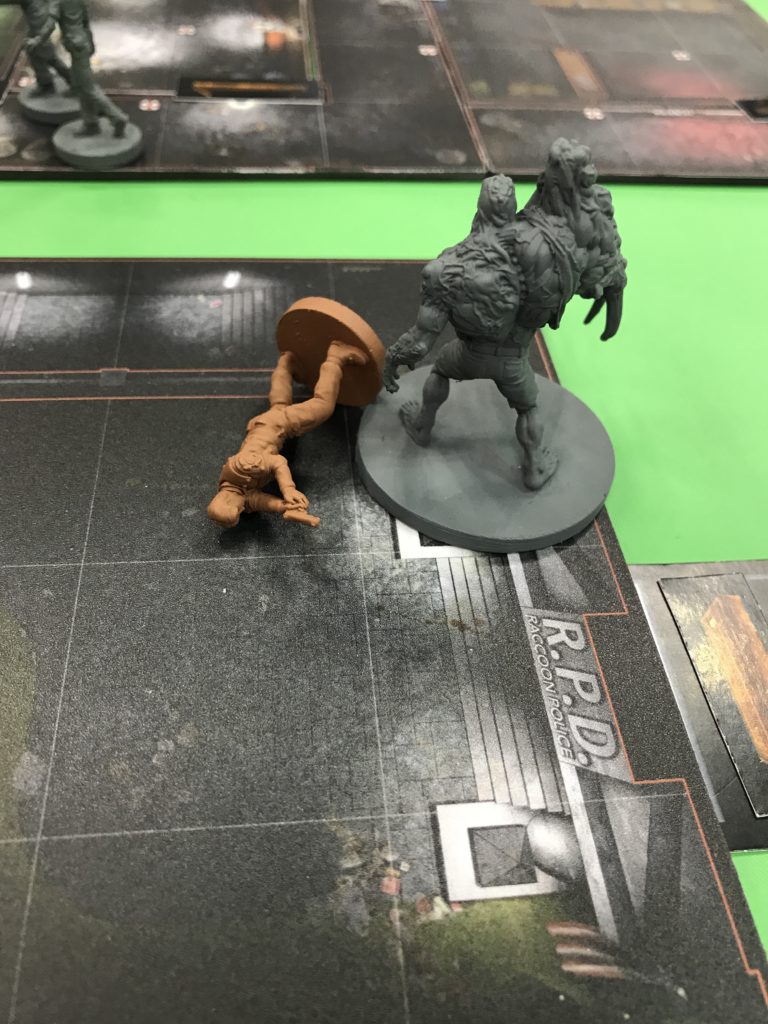 Of course, you can’t just kill everything. Shooting in the board game introduces an element of push your luck. I had a large pool of blue cubes representing my pistol ammo and each shot consumed 1-3 cubes. It was up to me how many to spend but I needed 2 success on those custom dice to end the threat for good. A single success would only push the zombie back to buy me some breathing room. This may be my favorite tension-building aspect as I’m forced to consider how much ammo I have and how much I want to carry forward into future levels. Like the best survival horror games, resources are scarce and not knowing when the next ammo box would show up made every decision to pull the trigger hard.

Leon ultimately perished at the hands of whatever that horrible abomination was, but my interest in the game did not die with him. I played prototype components and the game is still in development so a lot of things will change, but I definitely felt the tension that they were hoping to bring. More importantly, it did not feel like Just Another Zombie Game. Not everything was unique and it will remain to see how well the final translation from video game to board game works, but it’s safe to say I’m excited. Maybe I can finally redeem myself in the eyes of that cool cousin.

Want to keep up with what’s new and cool in the world of tabletop? Tune into Game the Game on G&S Live every Friday from 4:00 pm – 6:30 pm where Ivan Van Norman and Becca Scott break out some of the best board games the industry has to offer, with new guests each week!

What’s the scariest game you’ve ever played? Tell us in the comments!