The explorers of Star Trek split the Milky Way galaxy into four quadrants: Alpha, Beta, Delta and Gamma. Modiphius’s plans for exploring the Star Trek universe also fall along these lines, with a book planned for each Quadrant to detail the aliens, locations and adventures within. The first of these books, about the Beta Quadrant, recently went up for pre-order from Modiphius. We got a look at the pre-order PDF of The Beta Quadrant Sourcebook and wanted to share our observations with our Shield of Tomorrow fans!

The United Federation of Planets is front and center in the book, kicking off a lengthy discussion of how it fits into the greater universe. The majority of the discussion here is about the civilian side of the Federation, leaving the meatier military discussions for the division sourcebooks also planned for the line. Sidebars sprinkled throughout the chapter offer a variety of looks at the Federation such as Starfleet, the Ambassador Corps, Romulan spies, the Klingon High Council and more. Four UFP planets get an in-depth look in this book; Andoria, Benzar, Earth, and Vulcan. Vulcan’s existence models that what fans knew of it in the original timeline, before the most recent Star Trek films split off into the Kelvin timeline thanks to some time-travel shenanigans. Fans of Enterprise will also find a small page of historical discussion surrounding their timelines. 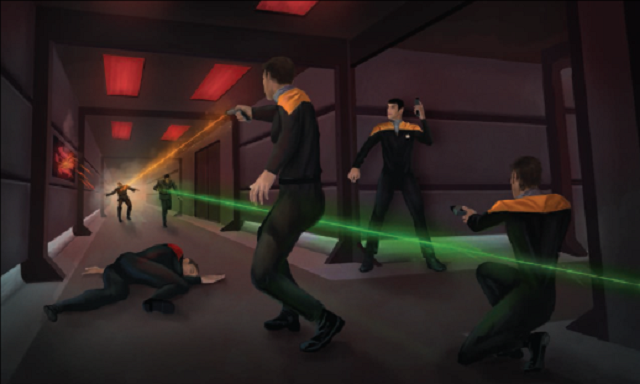 Four other species also get an in-depth treatment as befitting their status as players in the Beta Quadrant. The Klingon Empire gets a lengthy history that details its evolution from early hostility to the uneasy alliance of the Next Generation era. The Romulan Empire details their split from the Vulcans, how they drifted away from contact with the Federation and their suspicious return. The Orion Syndicate reveals some secrets of its criminal empire, and the Gorn appear at the tail end of the chapter. Each of these alien races geta a write-up that follows the Federation chapter with cultural details and a few important planets to inspire the GM.

The fourth chapter reveals write-ups on common starships for the aliens discussed in the previous chapters. Players and GMs looking for more Federation starships would do well to check out the upcoming Command Division book also available for pre-release. This section includes Klingon battle cruisers, Romulan birds of prey and Orion pleasure barges. It also has rules for tech that’s unique to alien ships like cloaking devices. Encounters round out the final chapter for ready-made situations for players to deal with such as tense Neutral Zone encounters or run-ins with Orion slave traders.

Star Trek Adventures fans looking for more information on the setting will find plenty of inspiration, new player options and episode hooks waiting for them in the pages of The Beta Quadrant Sourcebook. Officers who pre-order the book at Modiphius’s site get access to the PDF right away if you can’t wait to take a trip to the Beta Quadrant.

What is your favorite Star Trek alien species? Tell us in the comments!

And be sure to tune into our Star Trek RPG show,  Shield of Tomorrow on Geek & Sundry  Twitch and  Alpha every Friday starting at 4 PM PT, followed by our aftershow on Alpha, Behind The Shield, where the crew discusses the episode and Trek-dom topics like this one.