Hands On Overview: MISSILE COMMAND Brings A Retro Video Game to the Tabletop

Missile Command from Atari is one of the all-time classic arcade games. It was you against a barrage of missiles that never ended. There was no winning, simply surviving longer than anyone who’d played before you. Missile Command from IDW is a new board game released as part of IDW’s partnership with Atari. It re-imagines the game of solitary defense into one of explosive offense, and is one of the best games I’ve played this year. 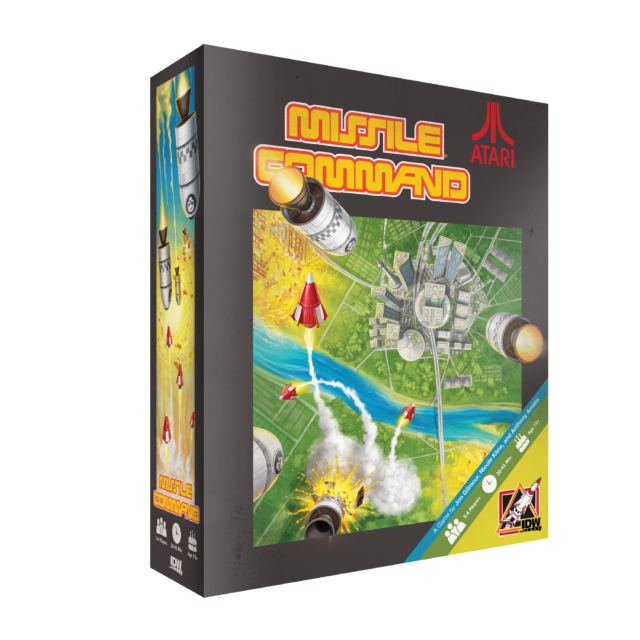 The core premise of the video game was simple: You were meant to protect 6 cities from incoming bombs by launching your own missiles into the air to intercept them. Mistime your launches, and your cities would be destroyed. If you’ve never played it,  you can play in your brower on various officially licensed websites. The Missile Command board game shares that premise, only your opponents are your friends instead of a mindless computer chip. You’ve got 6 cities to protect, but so do they. The game ends when someone’s been completely wiped out and points are scored for each enemy city you’ve blown up and each friendly city you’ve saved.

Before you start punching coordinates into your computer and filling the atmosphere with rockets, you’ve got to load up on artillery. The beginning of each round is called the Negotiation Phase. Don’t let the demure name fool you; Missile Command’s 3-minute negotiation phase has generated more arguments, more impassioned pleas for mercy, and more oaths of vengeance than almost any game not called Cosmic Encounter. This phase is a real-time scramble to stockpile offensive missiles and nukes, defensive Interceptors, and to make promises and trades with your opponents before hiding everything behind your screen like a warmongering squirrel. All components are limited, and everything is up for trade, meaning you can corner the market on nuclear missiles and demand a despot’s ransom in Interceptors in exchange for doling them out. 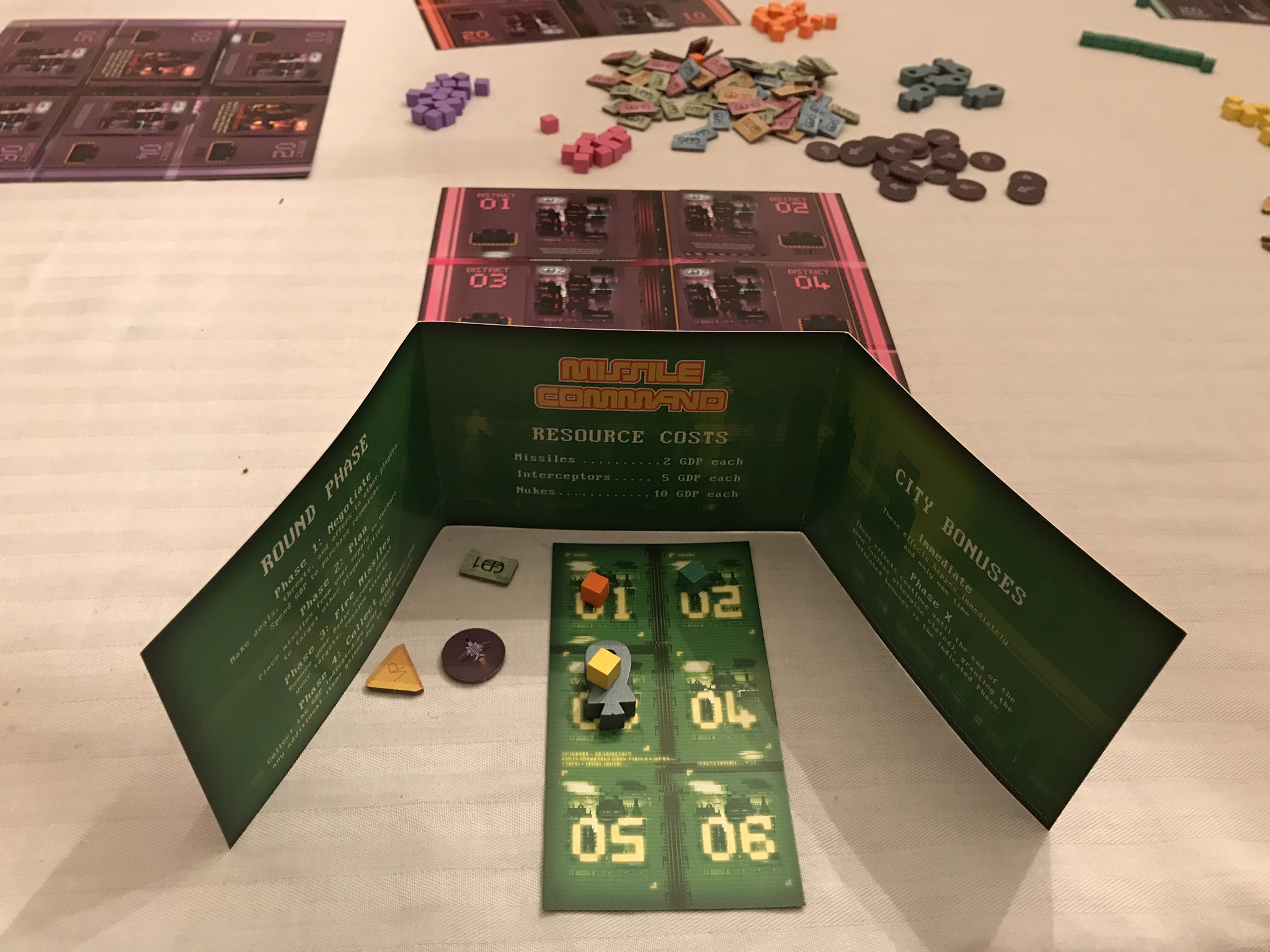 Unfortunately, waging war is expensive. Missiles don’t come cheap, and purchasing missiles will potentially telegraph your actions. If I want to send explosives flying in Matt’s direction, I need to purchase cubes matching Matt’s color. Seeing this, Matt might pick up a few missiles of my color leading to the potential for a stand-off. If you both end up firing missiles at the same numbered city they’ll collide in mid-air causing little more than wasted taxpayer money. The fact that these purchases are both public and timed create an astounding amount of tension for such a simple rule set. You’ll watch your opponent’s purchases like a hawk, and monitor whispered negotiations hoping to both hear your enemies plans and try to time your own purchases during a moment of distraction.

Not all negotiations are material. Perhaps you offer to toss Jess some missiles matching Chris’ color in exchange for a promise that she doesn’t target you for a round. Maybe you leverage your stockpile to direct others to do your dirty work for you. Whatever you do, you’re forced to trust your opponents because none of these future promises are binding. If you aren’t careful, you’ll arm your opponents with the tools for your own destruction. Just like purchases, these negotiations are public. You can try to whisper, make secret hand signals, or otherwise hide your plans but the pressure of that timer will lead to mistakes…if your ‘ally’ doesn’t just sell the information to an opponent for a few Interceptors.

After 3 heated minutes, you’ll move into the planning phase. The items you’ve just bought and traded for are deployed to the small grid behind your screen. The loud chaos of the planning phase is replaced with a quiet, simmering, tension as you start deciding who to bomb and where to launch your missiles. Interceptors can be deployed to defend your own city, and they work similarly to missiles. Place one on City 2 and it can be discarded to eliminate a rocket headed to that city. Deploy 2 Interceptors and you can block two missiles. The strategy here is mostly trying to figure out who is coming for you and who you need to attack. Nukes can be loaded into a missile to destroy 2 cities at once, which can be a tide-turning moment should one punch through an opponent’s defenses. 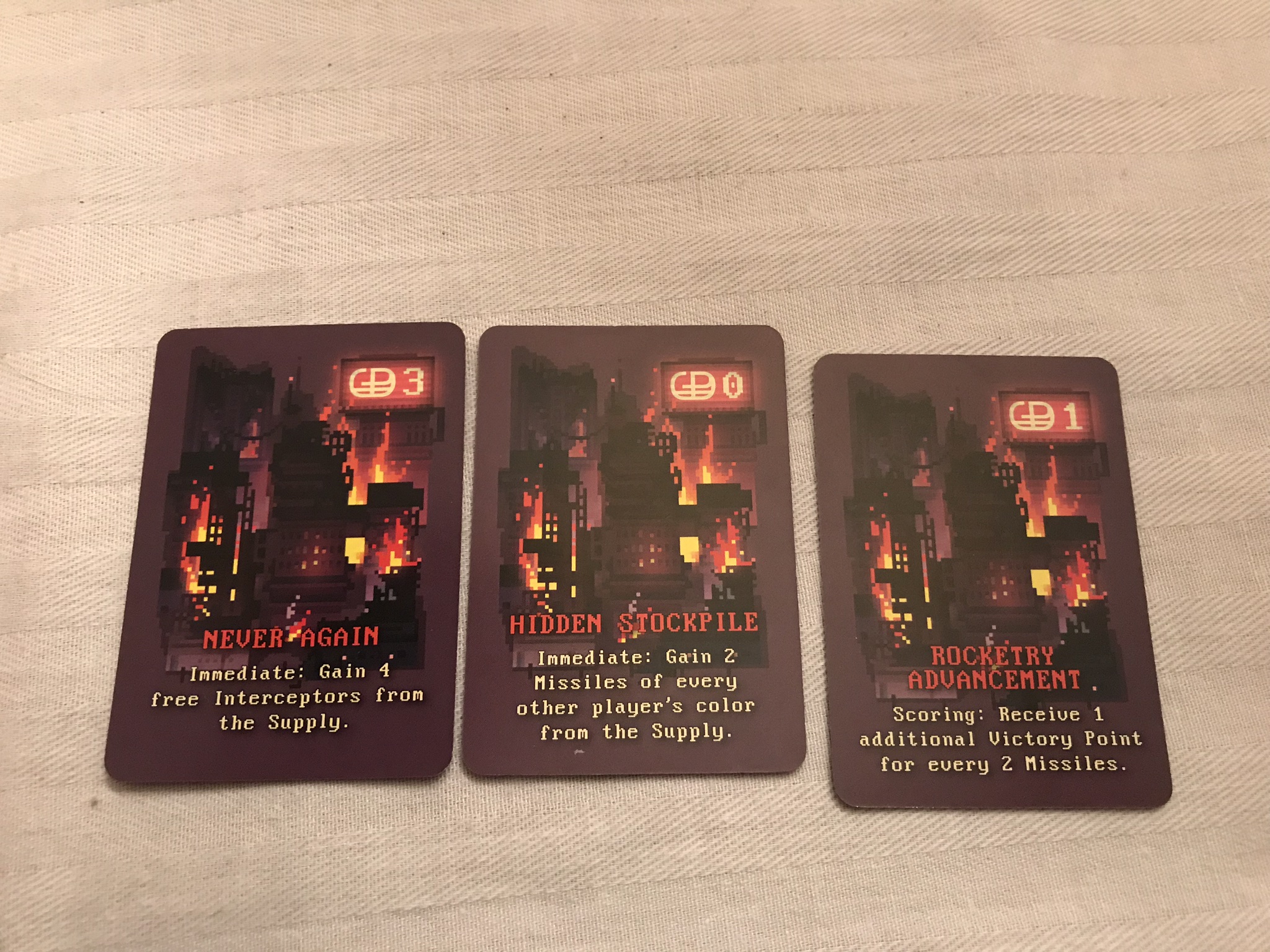 Unfortunately, the destruction phase is where a game can threaten to wobble out of control. The magic of the negotiation phase is in how it’s completely unbound. Anything can be traded, anything can be promised. The destruction phase also has little structure, but it can create a few problems. When a city is blown up, the owner of that city flips the City Card that’s been hanging out in that space. These cards will provide various bonuses. You might get increased income, or an infusion of missiles, or even special abilities you can use to provide more information during planning. There are no rules for turn order during this phase, but it can matter if multiple players are reaching for the same component-limited resource. Additionally, some of these city cards are simply stronger than others. It doesn’t happen often, but it’s possible for a player’s board to be full of powerful cards while an opponent gets an unlucky deal and ends up with weaker ones.

Those are minor quibbles, however. Missile Command is chock full of tension, and manages to energize a table like few games I’ve played this year. I love games that get us conspiring with each other and cursing at each other. It’s a light game of diplomacy and destruction, and one I’m eager to play again and again. At only 30 – 45 minutes per game, you can even afford to reset and start a whole new game, licking your wounds and harboring grudges that demand recompense.

What retro video game would you love to see on the tabletop? Tell us in the comments!