Many soccer fans remember Zinedine Zidane’s unconventional final game of international play. In the 110th minute of the 2006 World Cup Final Zidane headbutted Italy’s Marco Materazzi square in the chest and was sent off the pitch following a red card. The Golden Ball winner was not on the pitch for the penalty shootout, potentially costing France the 2006 World Cup. Zidane was rightfully chastised but it’s a shame he wasn’t playing Guild Ball. That kind of move is likely to score you some points.

Loosely based on a violent medieval precursor to modern soccer called mob ball, Guild Ball is a miniatures game of tactical bloodsport. Some teams excel at darting up the field, dodging opponents and traps on their way to a goal. Others can’t tell which end of the ball to kick and instead win by smashing, stabbing, burning, or poisoning their opponents as if the Dead Rabbits ran FIFA. 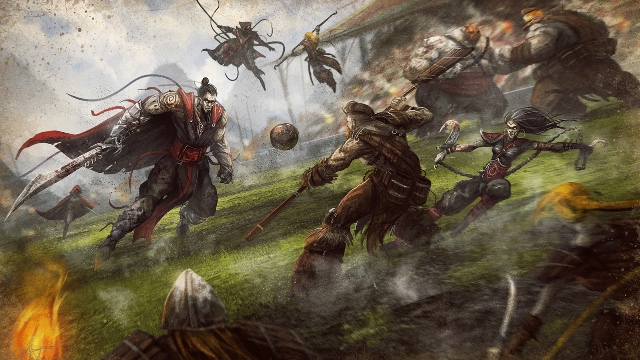 There’s no rolling around on the ground clutching your shins in fake agony in Guild Ball. Entire forests sprout up from the pitch while Morticians weave dark magic and turn teammates against each other. Half-machine Engineering monstrosities lob chemical bombs while an actual freaking bear chases players down and gives them death hugs.  It’s brutal, it’s tactical, and it plays oh-so-smoothly.

Teams field a relatively small model count (6 figures) and alternate activating individual models. You’re never out of the action for very long and I love the opportunity to react to an ever-changing pitch. Soccer has a fluidity to it as teams push and pull up the field and Guild Ball captures that perfectly. You’ll have a gameplan and a strategy for the round of course, but you have to be able to react tactically when a Fisherman steals the ball from you or a Butcher knocks you down and shoves a dirty knife into your gut.

To begin a round, you gather a pool of influence and allocate it to your team. The more attacks, special abilities, and other actions you need a model to do the more influence you have to give them. Models gain Momentum for the team as they act, a powerful resource that unlocks special actions and abilities. This ramps up the energy throughout the round and drives your activation order. Models with Momentum burning plays usually try to activate late. Momentum resets between rounds which gives a nice tempo to the game. There is a rise and fall to the action that mirrors the push and pull in our real world sport. 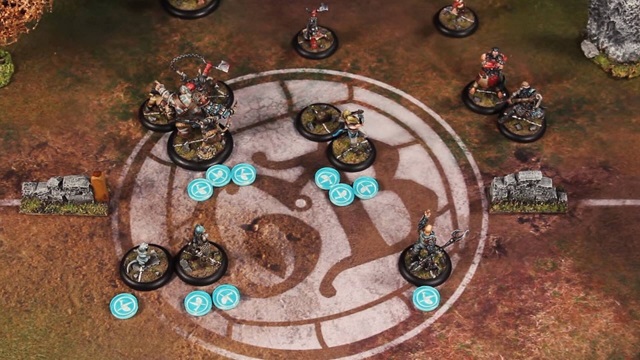 By far the greatest mechanical system in this game is the Playbook. Guild Ball uses pools of dice familiar to any miniatures gamer. Rather than simply using them to deal damage, successes are used to buy options. The more success generated by your roll, the deeper in your Playbook you can go to select a single option.

There’s no complex differences between melee, ranged, or magic like you may find in other games. All character’s Playbooks function the same way. How they’re arranged gives the teams their unique flavor. Pictured here are two different Playbooks. Tapper-the yellow Brewer-has damage and knockdowns early in his book. Flint (blue) is less a footbrawler and more a footballer. His Playbook features Tackles and repositions.

This system is both easy to learn and deeply rich. Picking up a new team doesn’t mean learning any new rules, and you can tell at a glance what an unfamiliar opponent’s players do well by looking at their book. There is a lot of strategic and tactical depth to Guild Ball but the systems and rules are designed to get out of the way as fast as possible and let you start scoring goals. Or murdering people. Your choice. Even team construction is easy; there are no points or upgrades to worry about. 1 Captain, 4 players, and 1 adorably violent mascot. That’s it.

Already in Season 3, Guild Ball has grown and adapted quite a bit. In addition to a new team and new models for old favorites, it brought some minor rules tweaks that both balance and streamline decisions. The Seasons also deliver a growing narrative of this titanic power struggle in the Free Cities. Spigot was a rowdy pugilist in Season 1, as likely to kick your teeth in as he was to kick the ball. Veteran Spigot returned sober and ready to show his skills with the ball. His changes not only serve the story and lore but also opened up options for Brewers players looking to score some goals.

I will note that Guild Ball is certainly not a simple game. Terrain, Guild Plots, and the structure to league play all add complexity. There are also many miniatures with unique abilities so learning the game will come with brutal surprises and crushing defeats. However the process of learning the system is more enjoyable than many other miniatures games I’ve tried, and Steamforged seems committed to editing and improving the system with each new release. 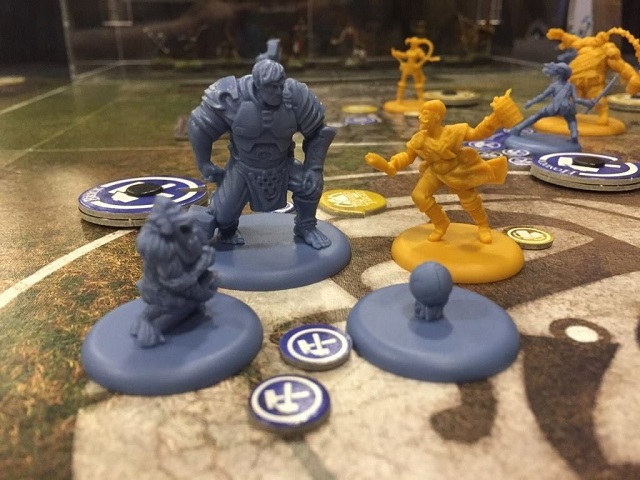 I’ve been playing Guild Ball for close to a year now and am continually impressed by the strategies and tactics that are unlocked. There’s a humor and whimsy folded into the macabre elements that make it a joy to play, even when you’re getting your skull kicked in by a superior opponent. Besides, how many games let you attack a mechanical colossus with an adorable otter?

Are you a footballer or a footbrawler? Who wins: a bear or an otter? Let us know below!