Announced at the most recent D23 Fan Expo, Walt Disney World resort is finally getting a touch of Marvel magic, when the Guardians of the Galaxy indoor roller coaster opens in Epcot in 2021, the resort’s 50th anniversary. Up until recently, fans have known very little about this attraction besides that it was coming soon, but at theÂ Epcot IAAPA 2018 breakfast panel, Bob Chapek, Disney Chairman of Parks, Experiences and Consumer Products, revealed the ride vehicles from the Guardians of the Galaxy indoor roller coaster in a special presentation. Luckily, the panel was recorded, and you can watch it below, thanks to Inside the Magic.

Although the presentation was brief, one thing Chapek said stands out, as he told the audience that this coaster won’t just be fast dips and turns, but have a story to it. “This will be a coaster unlike anything youâ€™ve ever experienced before. We call it a storytelling coaster. But on this attraction, each individual cab will be programmed to direct your eye to the story happening around you.” He continued, saying “Instead of whizzing by the action, youâ€™ll be fully immersed in the story from the minute you launch.â€ 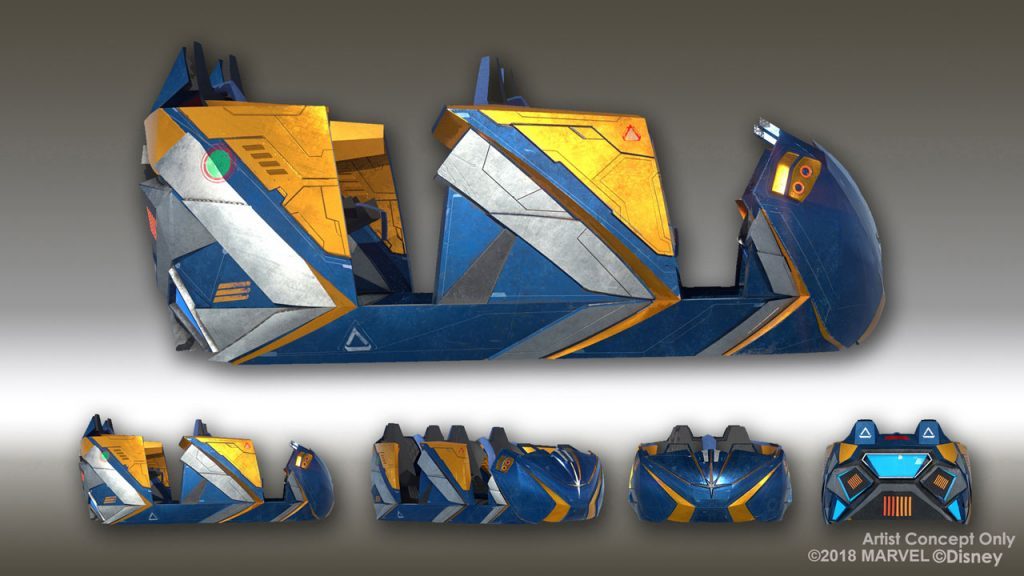 Right now, Guardians of the Galaxy is the only Marvel property that Disney can use in its Walt Disney World resort in any capacity. Although California Adventure at the Disneyland Resort in Anaheim will soon be getting its very own Marvel Land, because of preexisting deals Marvel made with Universal Studios Florida for their Islands of Adventure theme park, Disney can’t use most of the Marvel heroes in any park east of theÂ Mississippi, even though they own those characters. But fortunately, that deal was signed in the ’90s, back when the Guardians of the Galaxy were a D-list property, and they were not included, leaving Disney free to use them now in Florida.

Another interesting thing to note about this attraction for Disneyland fans on the west coast — Disney Imagineering likes to re-use ride technology, even when the rides themselves are different. The technology used for the Indiana Jones ride at Disneyland was then reused at Disney World for their Dinosaur ride for example. There are currently rumors (and just rumors, mind you) that an expansion to the upcoming Marvel Land will have a massive indoor coaster based around the Avengers. It would not shock us if the same tech used for this new Guardians ride is used for a possible Avengers coaster in Anaheim down the line. Food for thought, Disney-philes!Are you excited about all the Marvel goodness coming to the Disney theme parks? Be sure to let us know your thoughts down below.