Behold a Giant Grouper Eating a Shark Eating a Swordfish

It’s a ‘fish-eat-fish’ world. That famous idiom might be an apt metaphor for the difficulties of life on the land, but under the sea it’s literally how things work. Rarely does that popular expression look as cool as it does in this incredible footage (that we first saw at FLKeysNews) captured by the National Oceanic and Atmospheric Administration 80 miles off the coast of South Carolina. Deep below the waves, they filmed a shark feeding frenzy, but it got even crazier when another predator truly proved the old adage that “the big fish eat the little ones.”

During an exploration by from the NOAA ship Okeanos Explorer, the remotely operated vehicle Deep Discoverer (D2) found a group of around 11 sharks eating the carcass of a recently deceased, eight-foot, nearly 250-pound (or at least it used to be) swordfish, at about 450 meters (1,476 feet) deep. The sharks, which were made up of two species of deep-sea dogfish—the smaller Genie and the larger roughskin—looked like a band of starving men at a buffet as they tore away the flesh and meat of the swordfish. If that’s all NOAA managed to film this video would be amazing enough, but towards the end a large wreckfish casually arrived on the scene, staying out of sight of the sharks. It didn’t take it long to remind us, and one unfortunate feeder. that even a shark is dinner to a bigger fish.

AND DOWN GOES THE SHARK!

The next time someone asks how things are going during a difficult stretch of your life, show them this picture. 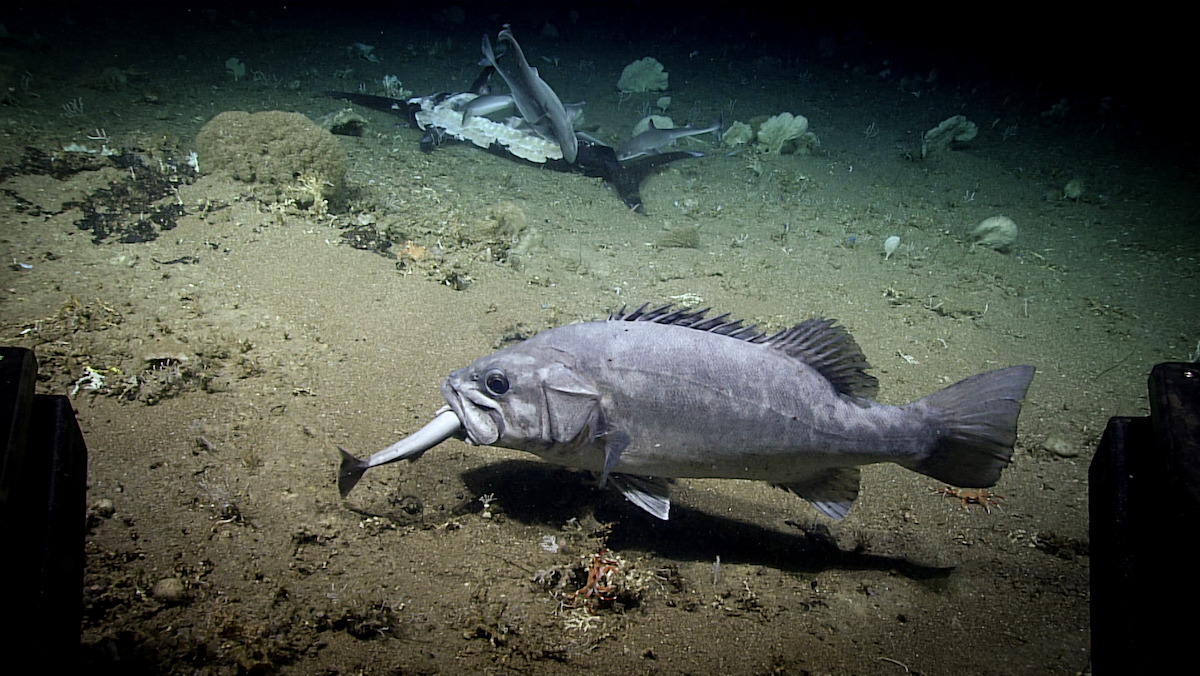 This is the living manifestation of those old sayings. Who among us can’t relate to the feeling of enjoying a nice dinner with our friends and family when the harsh reality of the world comes barging in unexpectedly to ruin everything?

Because it really is a fish-eat-fish world, but at least that’s not as literal for us as it is for fish.

Images: NOAA Office of Ocean Exploration and Research, Windows to the Deep 2019