Great Games that Fit in Your Back Pocket - Nerdist

Great Games that Fit in Your Back Pocket

Board games are fantastic, but like everything in life, they have their drawbacks. One notable negative is that they can be bulky and difficult to transport. But not always. Here are some great games that fit in your pocket. 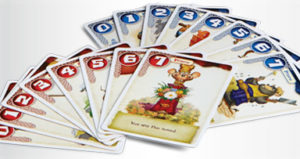 Strictly for two players, this microgame is all about second-guessing your opponent. In BraveRats, each player has an identical set of cards numbered zero through seven. You and your opponent each choose one, then simultaneously reveal. Normally the higher number wins the round… but every card has a special power.

For instance, the Assassin is only a 3, but changes the rule so that the lower card wins the round. The Prince is a 7 and therefore the highest card, but the Princess, a lowly 1, has the special power where if played against an opponent’s Prince, she automatically wins the game. Not just the round, but the whole game.

The result is a fun game that is easy to explain and plays in minutes. More than staring at a board and thinking through moves, it’s really about out-guessing the other player. Take a look into their mind and see if you can figure out what they are likely to do–and then counter it. Of course, they’ll be doing the same to you… 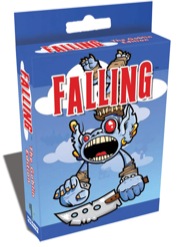 Maybe you have more than two players interested in a game. That’s where Falling comes in. It’s just a deck of cards, easily stored away. But when it comes out, it accommodates up to eight players. The idea is that one player deals and the other seven have fallen off of a cliff. Their goal is to be the last one to hit the ground.

Falling is a real time game. The dealer starts with the guy to his left and then, one at a time, starts dealing cards each of the players. Those cards allow for special abilities that might stop cards from being played, or force another player to take two. And that can be especially important when those final ground cards start coming out.

The genius of Falling is the real-time element. There are no turns and almost no downtime. Instead, you have to constantly be aware of what is about to happen and what could happen. Quite often, you might think you are safe only to have another player steal your safe card at the last minute, or put a detrimental one in its place.

Once Upon a Time 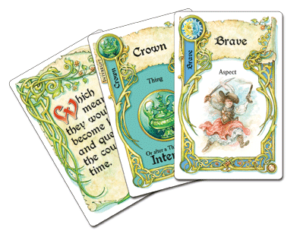 Set in a generic fantasy world, the players each get a hand of cards with familiar tropes–princesses, ogres, knights, etc. One person starts telling the story and, as they mention the cards in their hand, gets to play them. Of course, if they (unknowingly) discuss a card held by someone else, then that new player interrupts and continues the story. Each player is trying to bring it to a unique conclusion. The player that does so wins.

Undoubtedly, Once Upon a Time excels with a certain kind of group. If you’re surrounded by people who would rather pore over deep strategy games or chuck buckets of dice for the blood god, then this may not be the right title. But for drama geeks and role-players alike, this can be an absolute blast.

If you needed a game that would fit in your pocket, what would you pick?  Tell us about it in the comments.

TAGGED: braverats, falling, Board Games, Once Upon a Time