Great Games that Deserve a Reprint

There are some games that are so popular, they never go out of print. Dominion, Munchkin, and Catan, for example, will be in print until the inevitable robot uprising. But some fantastic games fall out of print for one reason or another and become very difficult to find. Sometimes an out of print game will be picked up by a different publisher, or sometimes enough clamor for fans convinces someone to do a kickstarter. Here are three great games that deserve a reprint. 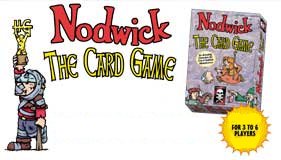 Based on the comic strip of the same name, Nodwick is about a D&D party whose henchmen (not hirelings) have all been chopped to bits by some very dangerous traps. In fact, they have each been chopped into six pieces – head, torso, arms, legs, spleen, and spirit. The goal is to assemble a henchman using Piffany’s magic duct tape, rose colored glasses, and happy thoughts.

But what takes this silly concept to the next level is the turn structure – there is none. Instead, players simply call out for cards they need. “Who has Nodwick’s legs?” “I do! I’ll trade for Wentwick’s spleen!” And so on. “Guys! Can anyone send me some Happy Thoughts?” It’s a great time as you try to trade for the cards you need. You only get to draw new cards if you pass a sand timer to the next player – unless it runs out. It keeps things fun and frantic. You keep drawing cards until someone puts together a full henchman.

Originally published by Jolly Roger games, Nodwick is now out of print and very difficult to find. Which is a shame. It’s a concept that most role-players will find humorous, the mechanics are friendly to family and casual gamers, and the fast-paced keeps it exciting for everyone. Here’s hoping some publisher helps put Nodwick back together. 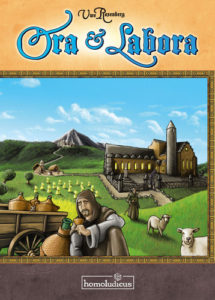 It’s strange to see a Uwe Rosenberg game on this list. The man responsible for Agricola and Caverna (and Bohnanza) can sell titles just because his name is on the box. But for whatever reason, Ora et Labora didn’t fly off the shelves the way the publisher had hoped.

In Ora, the players are monks working to build out their small monastic lands and work to produce a variety of goods – often beer or wine. The game has an innovative system for taking goods. They accumulate over time on a wheel, but when one player takes them, they drop to zero. So even though you can’t stop me from taking a particular action, you can certainly make the action less valuable by getting their first. Ora also has a great special element as where you build matters a great deal.

Ora introduces different styles of workers, allows you to bribe other players into taking actions on your behalf, and provides an overall solid experience. While a bit on the heavier side of gaming, players who like Agricola or Caverna should very much enjoy Ora. Because of that, I hold out hope that this title gets reprinted. 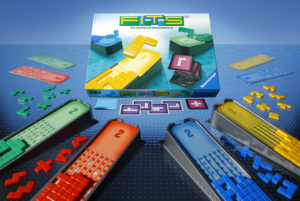 Dr. Knizia is responsible for some of the best gaming experiences of the last 20 or more years. And while Fits is a good deal lighter than some of his other titles, it should still thrill any Tetris fan. Fits is basically the board game version of Tetris.

Players each get a set of Tetris style plastic pieces and a board that you can slide them down. One by one, pieces are called and the players take the corresponding piece and place it on the board. The catch is that you aren’t just trying to complete rows. Instead, you need to leave gaps in the right places to get positive points and avoid gaps elsewhere that give you negatives.

Fits has some great chunky pieces and ends up being inviting and accessible for everyone. Plus, it’s a great game for families and other groups that want to avoid aggressive, direct attacks. In fact, you sort of just play your own game and then whoever has the highest score wins. The familiarity and the enjoyable puzzle aspect make this a great title to bring out at family gatherings and can be a good introduction to gaming. It’s a shame it’s now so hard to find.

What other great games deserve a reprint?  Tell us about it in the comments.