Part of the fun of playing Carcassonne is looking down at the city you’ve created with the other players. Win or lose, it’s exciting to see the place grow and change and be completed by game end. But this mechanic isn’t unique to Carcassonne. Here are a few more games that have a satisfying conclusion after the players have built the board. 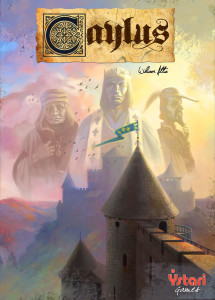 In Caylus, the players are trying to impress the king, construct the castle, and build out the town. Town tiles get built in a line and players can then use them to perform actions. Of course, workers in the town of Caylus are lazy and will only perform their action if the provost has passed them by.

The result is that the town changes dramatically from game to game. In one session, everyone might be using the lawyer to change zoning laws and construct new buildings. In another game, the lawyer might never come out and so those prestige buildings are completely absent. And it’s all by player choice. There is no randomness in Caylus and the players are the ones that decide what the final city will look like.

Not only does this help every game play differently, but it means that the city that results will be new each time. Perhaps your city has a quarry built early. Or maybe there was a rush for the carpenter. Players create their own opportunities. 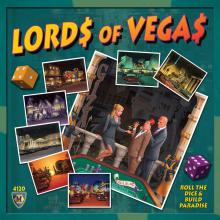 Lords of Vegas features the players as casino magnates who acquire property along Las Vegas Boulevard and establish their gambling dens. But they don’t just buy things willy nilly. Instead, they can create various kinds of casinos, which can then be merged with others of the same kind. Even though it’s a relatively light game, you still get takeovers, and casino owners may be ousted by rivals.

The game is fun and quick and relies on just the right amount of randomness. At the end of the game, you look down and see a wonderfully illustrated board filled with casinos that the players created, changed, and merged. No two boards will look alike. 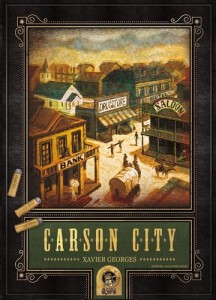 Sometimes described as “Caylus with gun fights,” Carson City lets you build out the land in an entirely different way. Rather than adding action spaces to the city, you actually buy plots of land on the board, then construct the city on your land. You might build mines, gun shops, ranches, or other western inspired architecture.

And positioning is critical. You’ll want your mines to be near mountains. Your ranches should avoid having any neighbors. And at the end of the game, you’ll be able to see the once pristine land now fully enveloped by a bustling western town. With just a few rules, the town grows almost organically.

And, unlike Caylus, you can absolutely attack someone’s territory and have an all-out gunfight for dominance. Will they cede their income to you? Or pull troops away from other options to defend it?

OK, so the setting of Ginkgopolis is a little bizarre; it’s a futuristic society which bases their construction on the ginkgobiloba plant. But the game is awesome. You start with just nine tiles showing the initial construction of the colony. But from there, players can expand the play area or build directly on top and bring the colony to new heights.

Ginkgopolis is part area control, part hand management, and all fun. Every turn, the city grows a little bit. Sometimes sprawling out, other times building upward. In fact, of all the games on this list, it feels the most organic. By the end of the game, you look over the creation of your play’s colony and think – hey, maybe the ginkgo tree isn’t such a bad medium of inspiration. Win or lose, you had a hand in creating something unique and interesting.

Sometimes it’s awesome to competitively build a city (or casino) in a communal setting. What games did we miss? Tell us about it in the comments.