All the Easter Eggs in GOOD OMENS’ Opening Title Sequence

Our only worry with Amazon’s adaptation of Good Omens by Terry Pratchett and Neil Gaiman is the world will end before it premieres on May 31. If the Apocalypse can’t be averted before then, at least we got to see the show’s fantastic opening title sequence: an animated cut-and-paste sequence that features our favorite angel and demon trying to stop Armageddon. Here are some of the best Easter eggs we spotted on the march to the end times, along with our favorite moments and gags.

It all starts at the literal beginning, as Aziraphale and Crowley are on hand for the creation of the Earth. 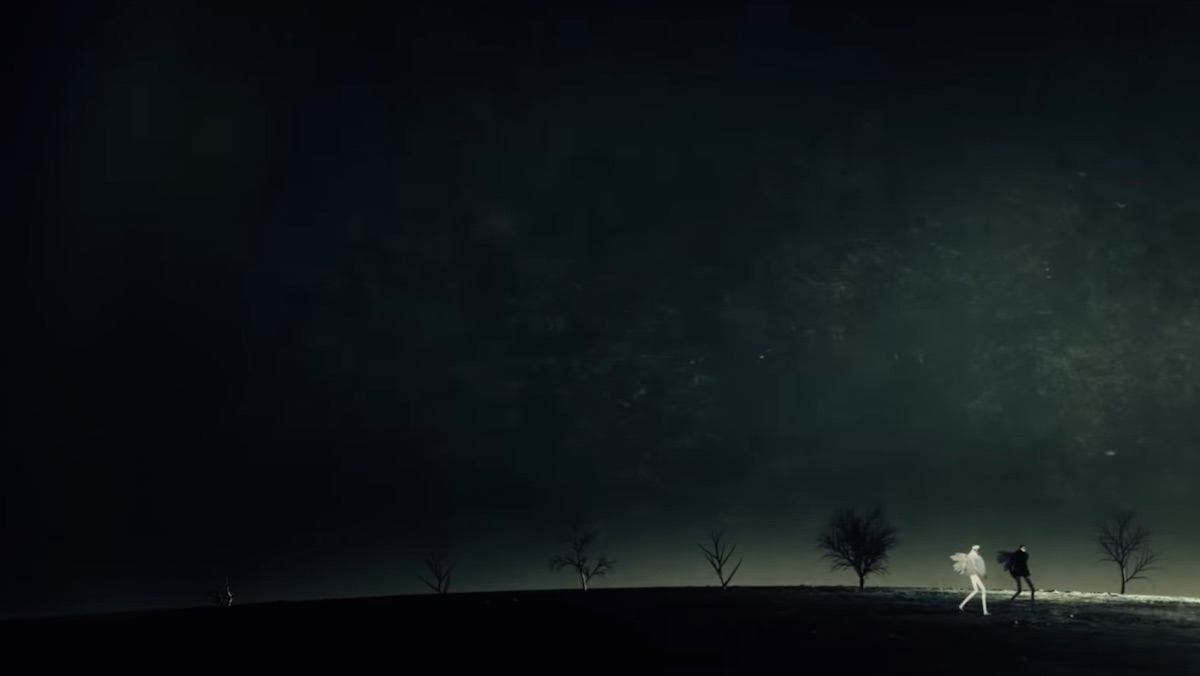 From there, they head through the Garden of Eden, where Aziraphale guarded the Eastern Gate and Crowley (known as Crawly at the time) played the serpent who tempted Adam and Eve. The little red-haired mohawk man who grabs the apple from the all-seeing Tree of Knowledge might be Crowley in his old serpentine form. Also following them are two nuns in black, a nod to the Chattering Order of St. Beryl, the talkative satanists who botched the switch of the Antichrist. 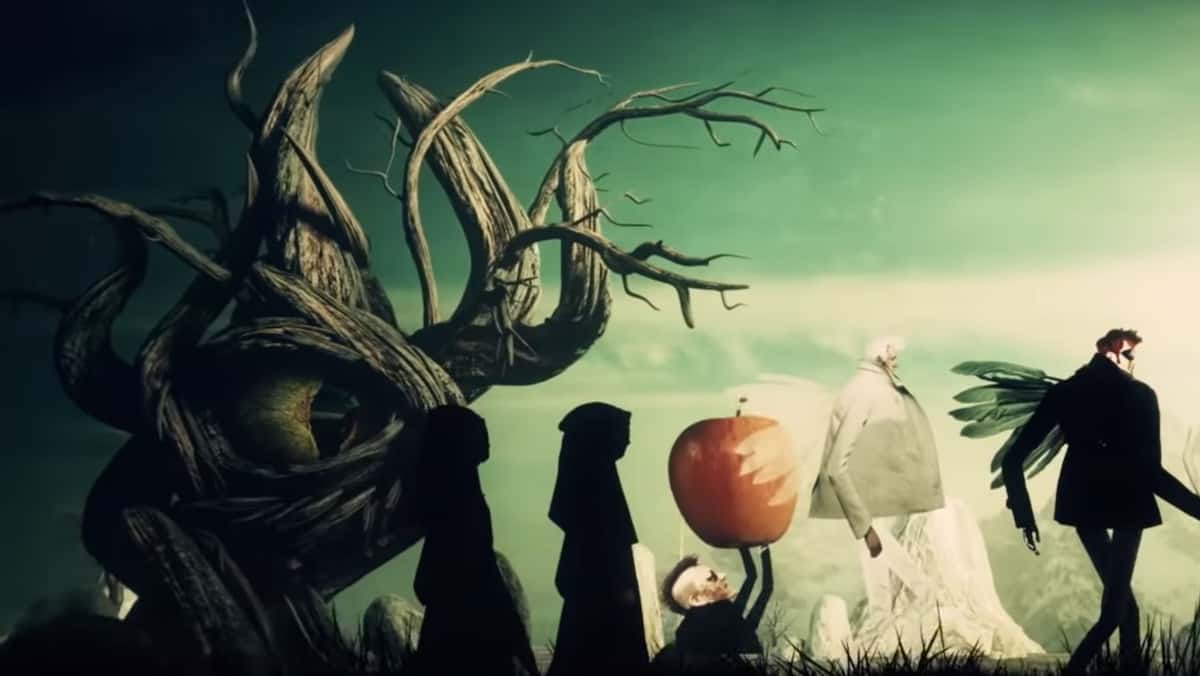 Crowley’s temptation led to Adam and Eve being kicked out of paradise, seen here, which is where the novel actually begins. 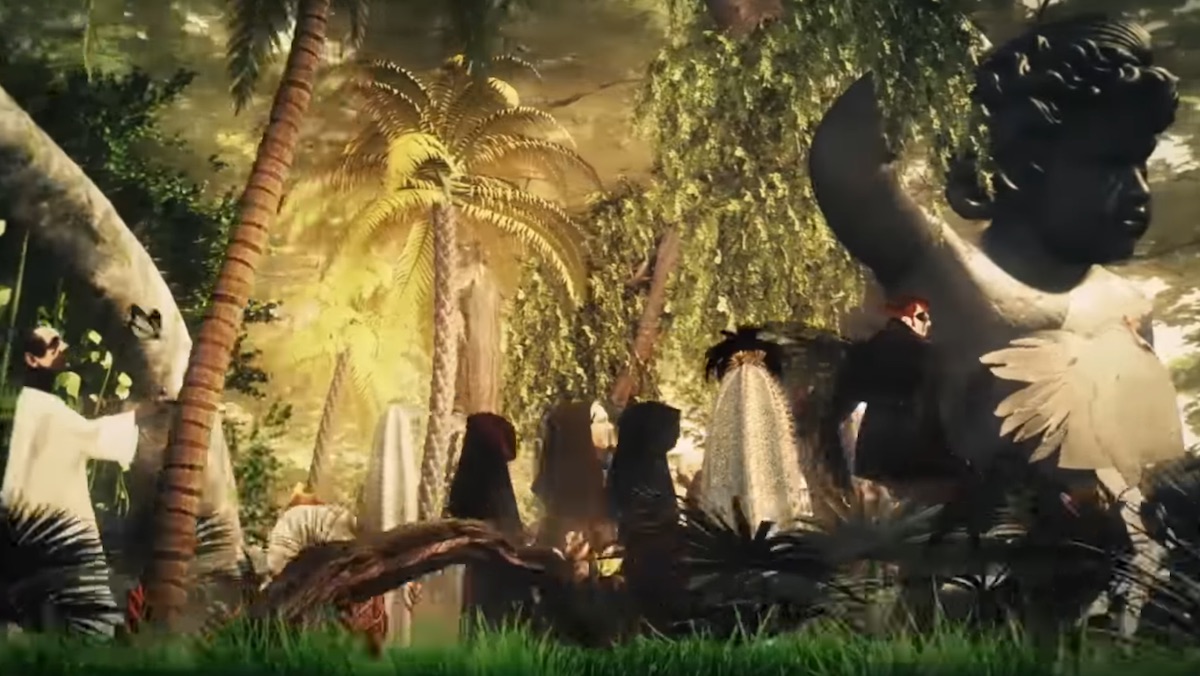 The unlikely friends then stop for a drink. This is one of the funniest moments in the novel: they get drunk and lament the end of the world they enjoy so much. This is also where they come up with their plan to work together and stop the apocalypse. 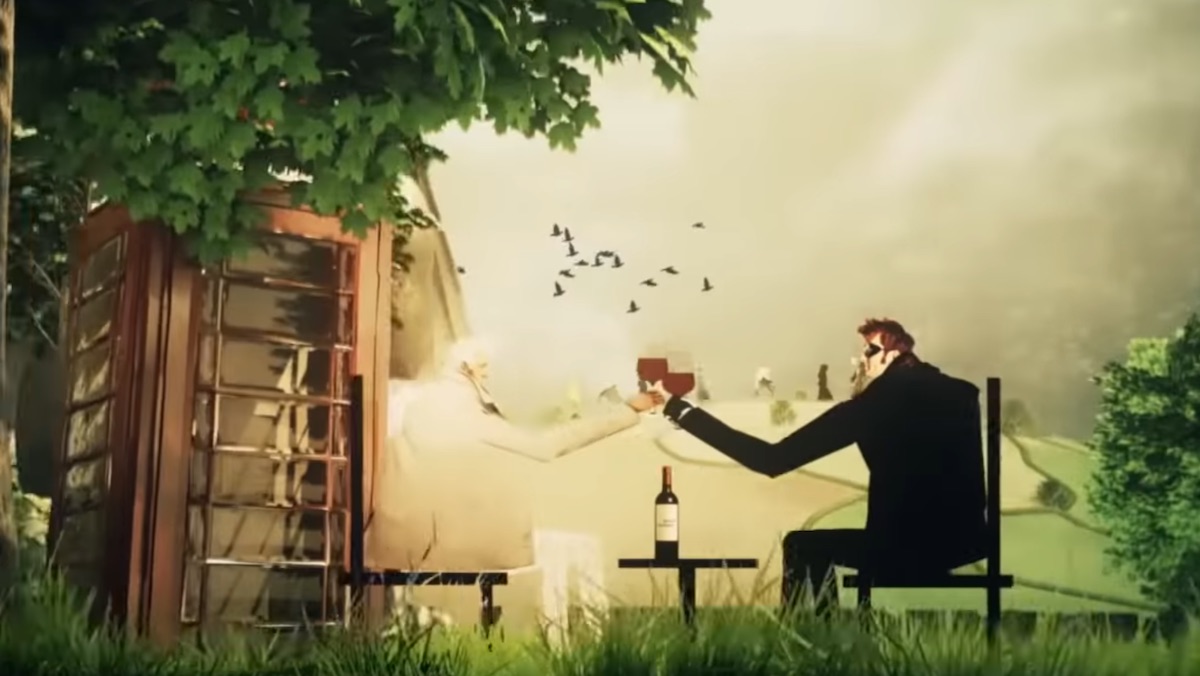 Next we see each supernatural beings’ favorite thing: Crowley’s black 1926 Bentley (which is obviously full of Best of Queen tapes) and Aziraphale’s book shop, which has already gone up in flames. 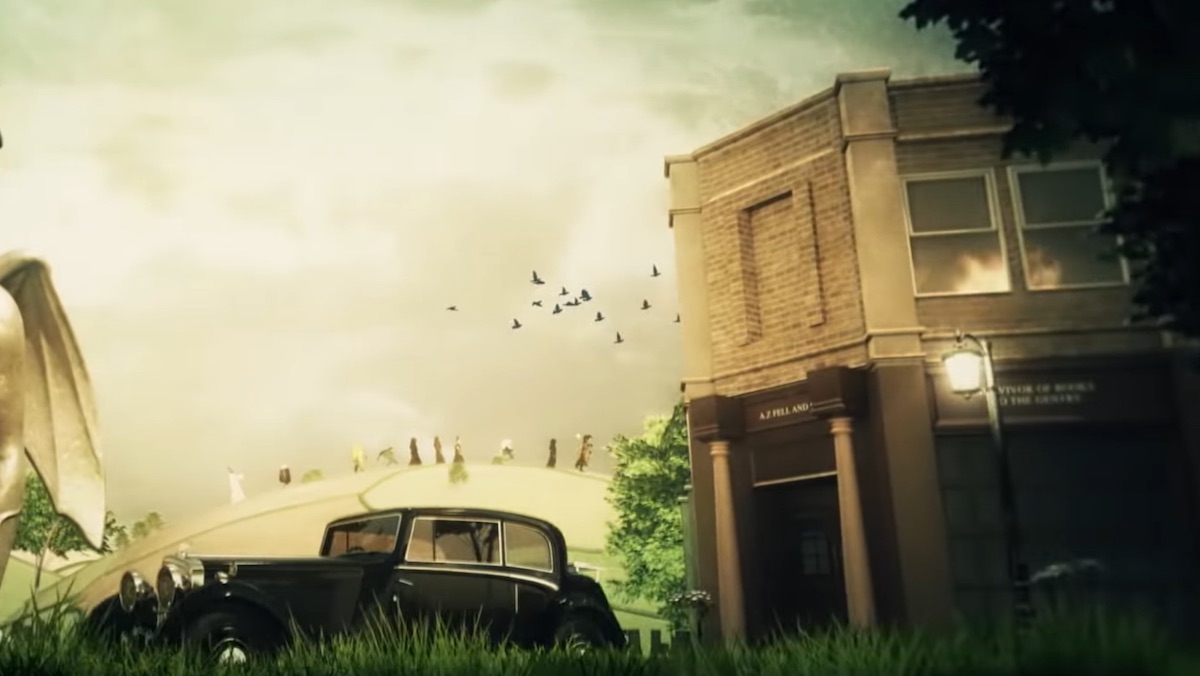 The next sequence shows the ever-growing line of weird people and creatures walking past Noah’s Ark. At the back, we see one of the Four Horseman of the Apocalypse (and one of the best characters in the book), Death himself. 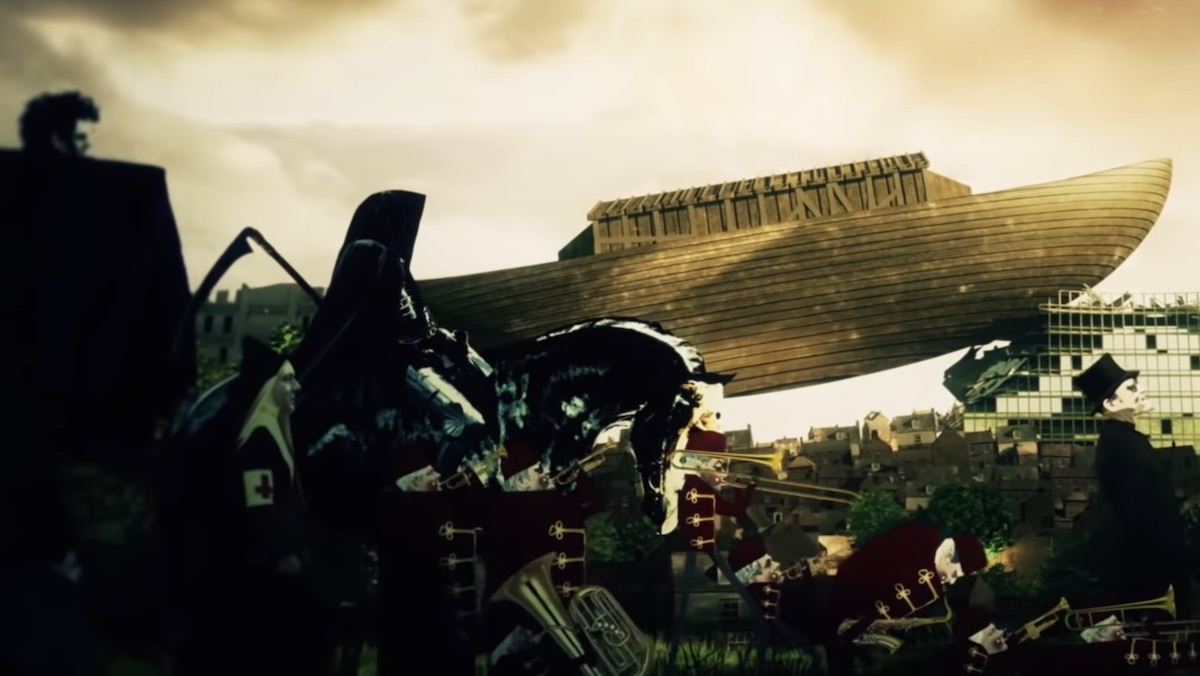 At the front, near the escalator that seems to be going towards Heaven, is a strange monster. Could this be Crowley’s true hideous form, which is only briefly hinted at in the book when he scares the man who shot him with a paintball gun? Maybe, but we don’t see any maggots. We do see someone in a helmet who might be one of the antichrist Adam Young’s Atlanteans. 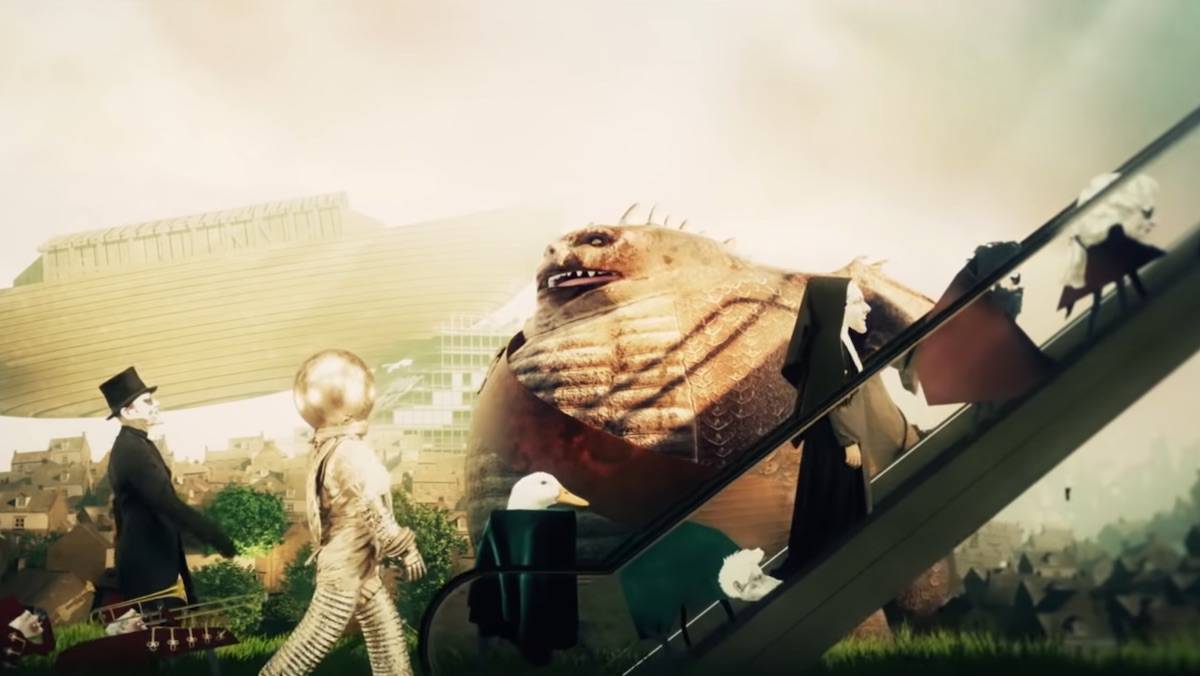 As the procession moves to the cosmos, we see that Famine and his sickly horse have joined Death, as have more bizarre people, aliens, and… things. 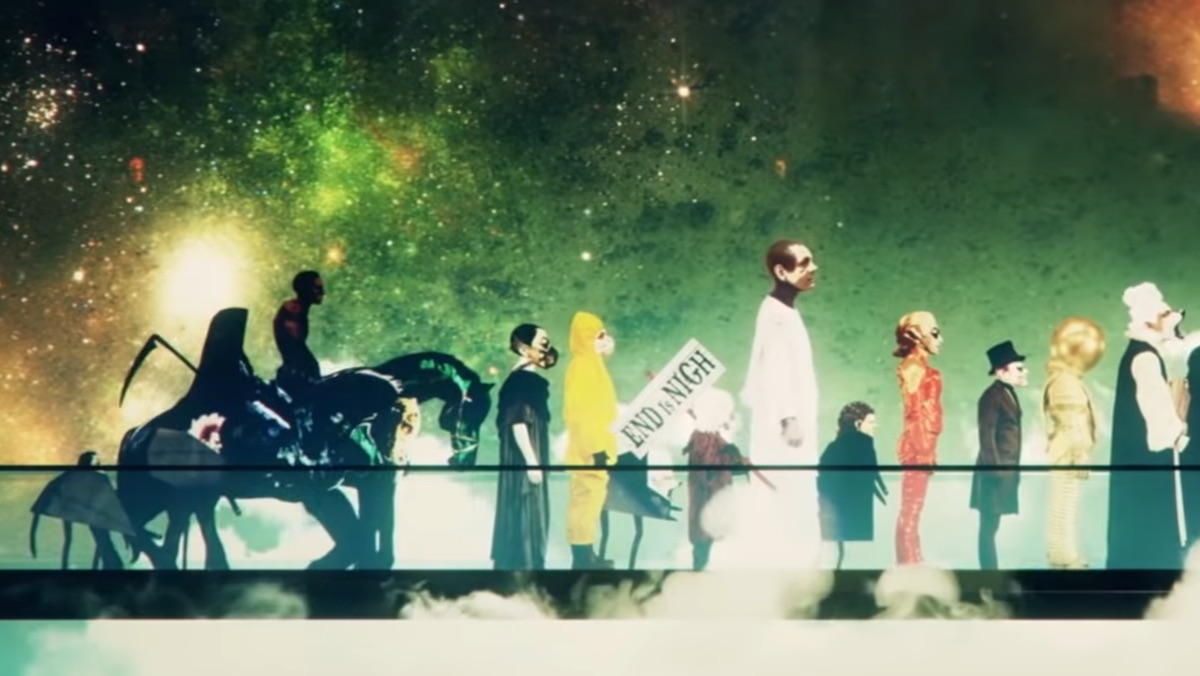 Adam Young’s power to will into existence the incredible fantasies he believes in takes flight later in the sequence, when an alien spaceship sputters and begins to crash land. 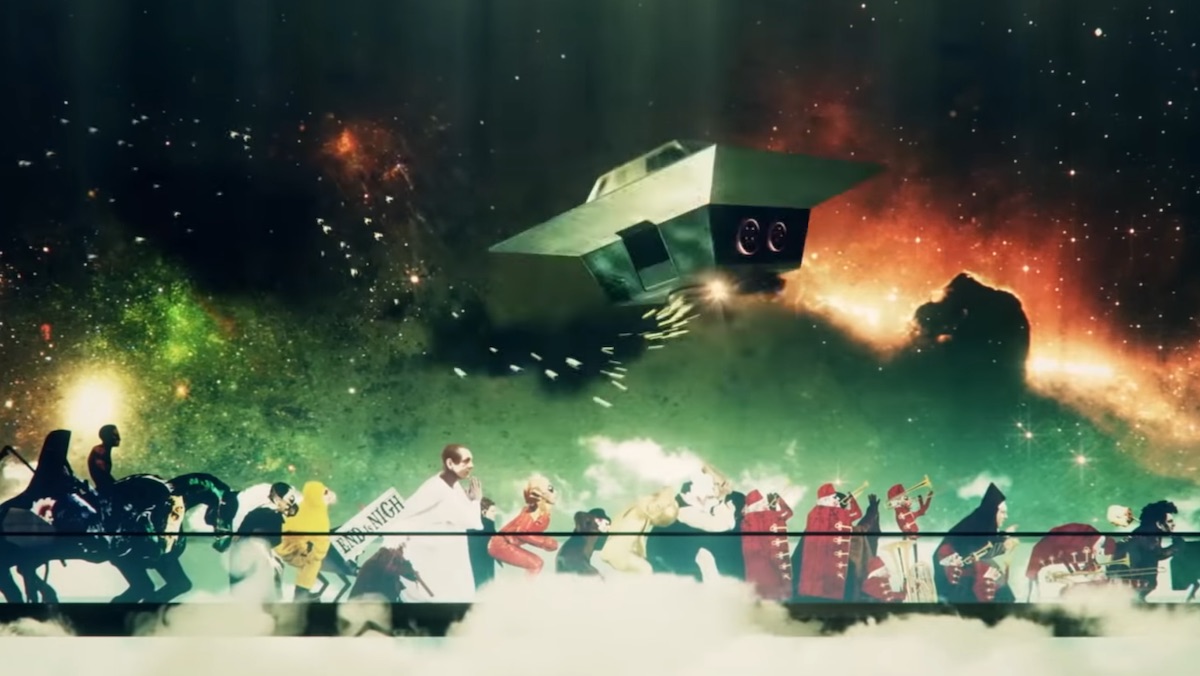 Aziraphale arrives and turns the ship into fish, another reference to Adam Young and his group of friends, the Them. They were fascinated by Charles Fort, who “could make it rain fish and frogs and stuff.” Earlier in the novel, Aziraphale also says the end of the world will be accompanied by strange phenomena, like “showers of fish,” so this is an Easter egg with two yolks. Unless it has three, and this is also an ode to the late Douglas Adams (“So long, and thanks for all the fish!”) from his friend Neil Gaiman. Even if it’s not, we’re going to believe it is. 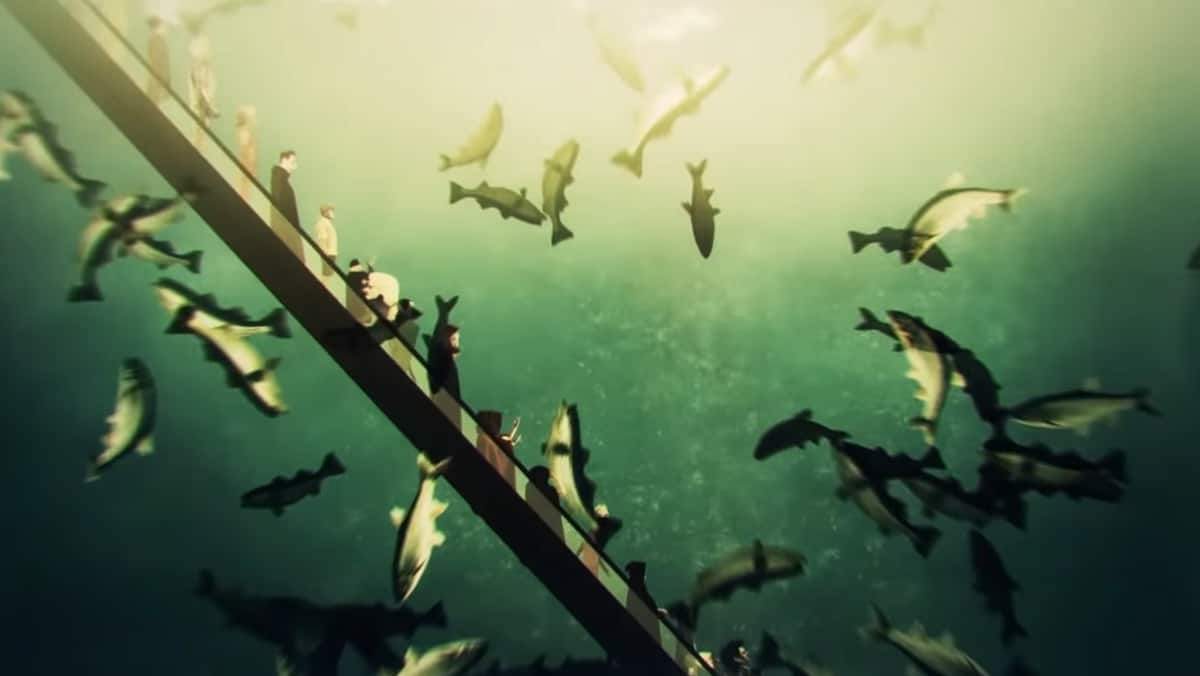 The march then moves to a boat (as the fish crash into the sea), which is a reference to the pleasure cruiser Morbilli, which came aground in the lost continent of Atlantis thanks to Adam Young. We also get a glimpse (below Crowley) of the third of Four Horseman of the Apocalypse (and another one of our favorite characters), the redheaded War. 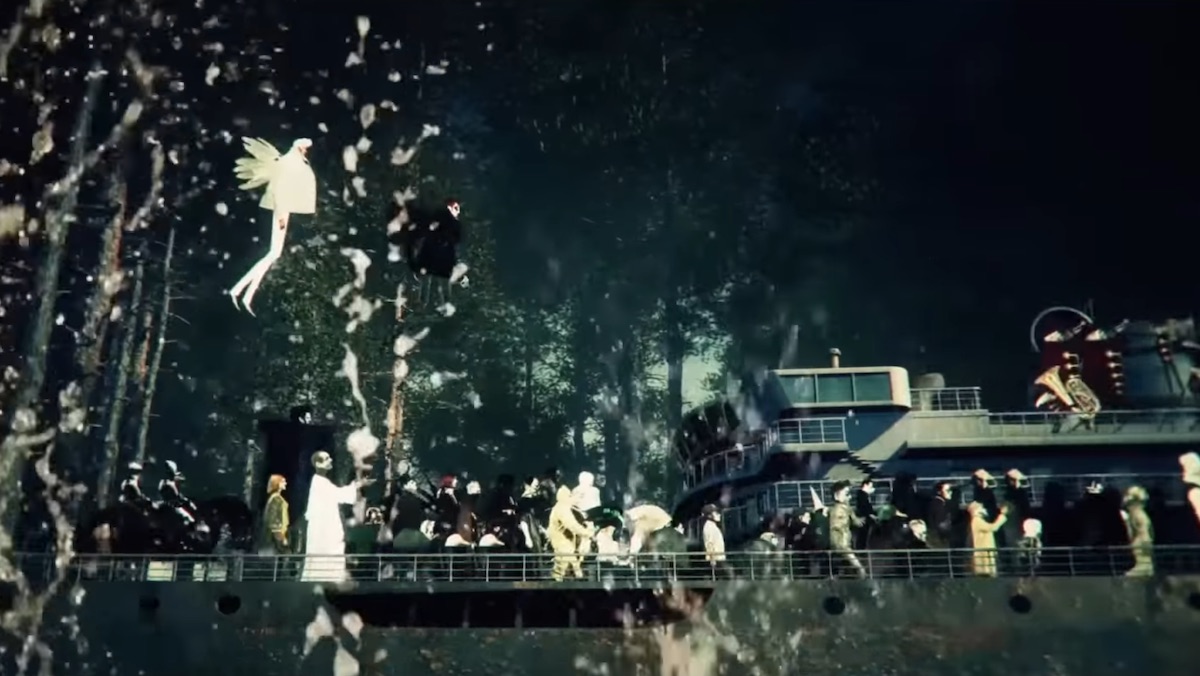 The boat gets consumed by water, another catastrophe as we get closer to the end, before we head below the waves. 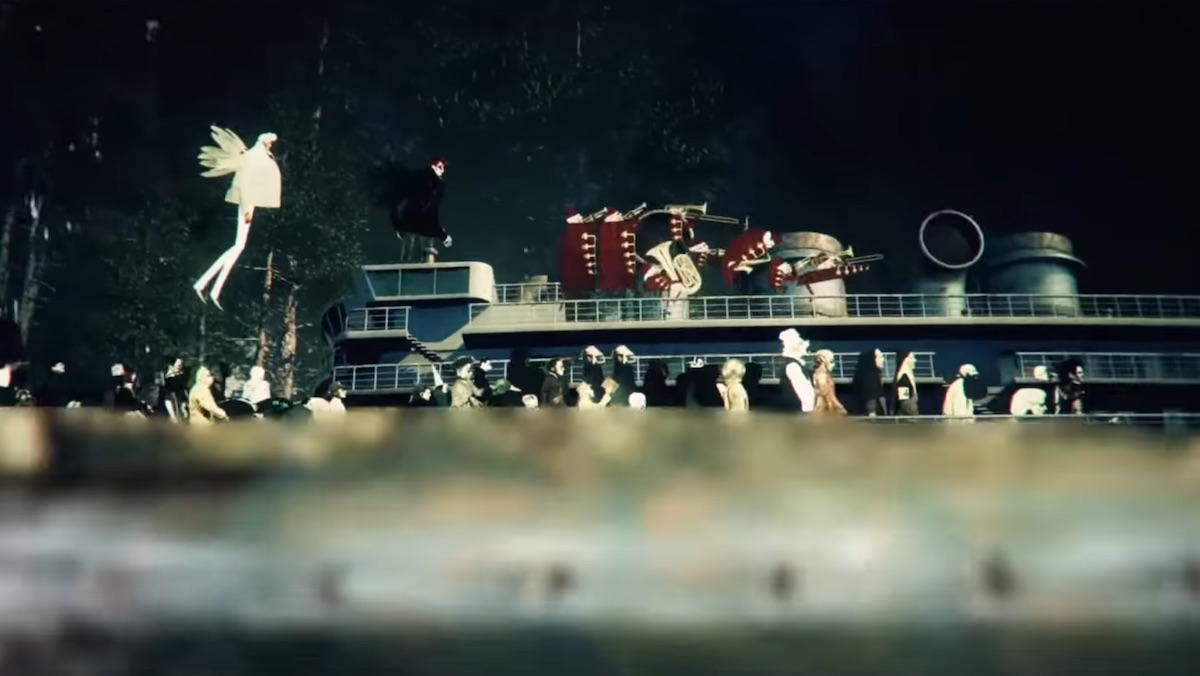 Here we see Adam’s real father, Satan himself. At the front of the line. Chalky, better known as Pollution (who took over for the retired Pestilence after mankind discovered penicillin), joins the rest of the Horseman. 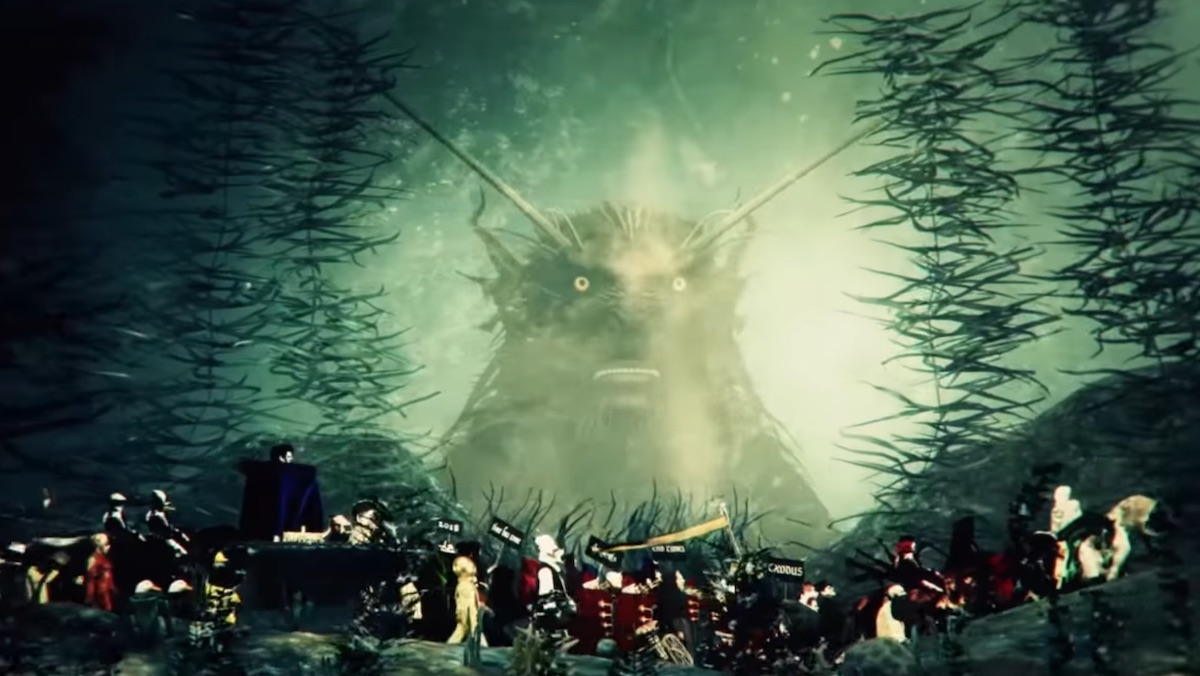 Here’s a better close up of the four. No motorcycles however. 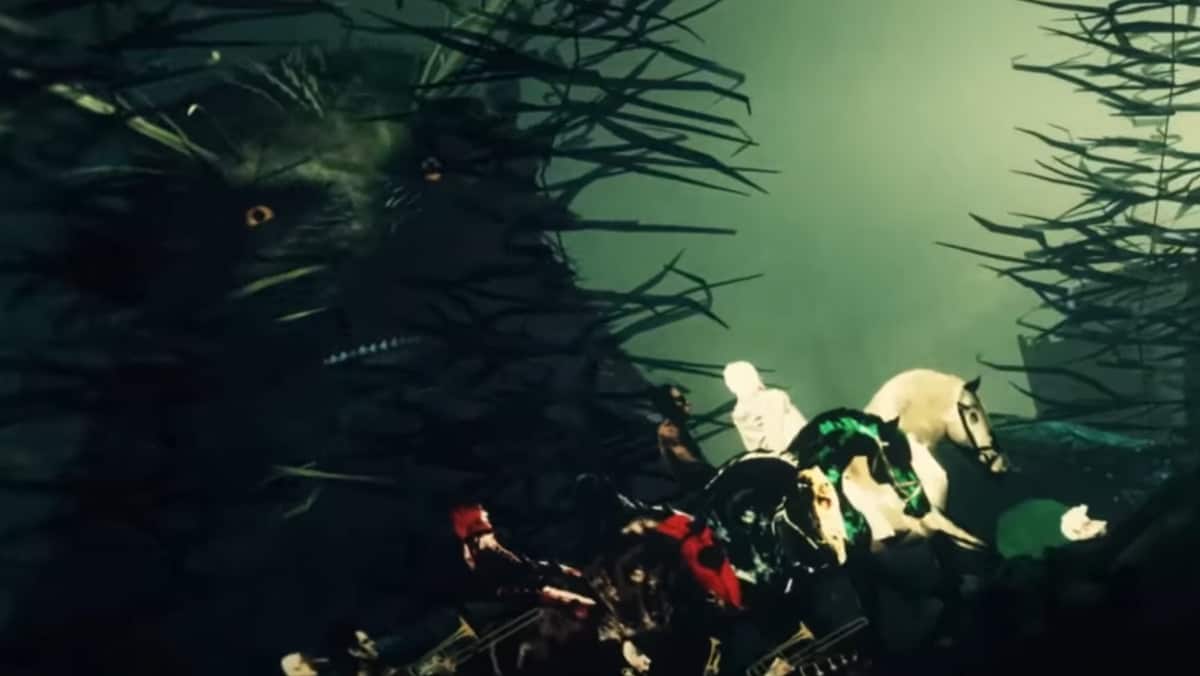 The parade, which is now overflowing with people, then moves to the destroyed streets of London. In the background to the left you can see a guillotine, a reference to the book’s theme that mankind comes up with worse horrors to inflict on itself than even Hell can invent.

In the foreground we also see the Witchfinder Shadwell and Madam Tracy riding together on her scooter. Shadwell probably has a can of condensed milk on him, but we can’t see it. 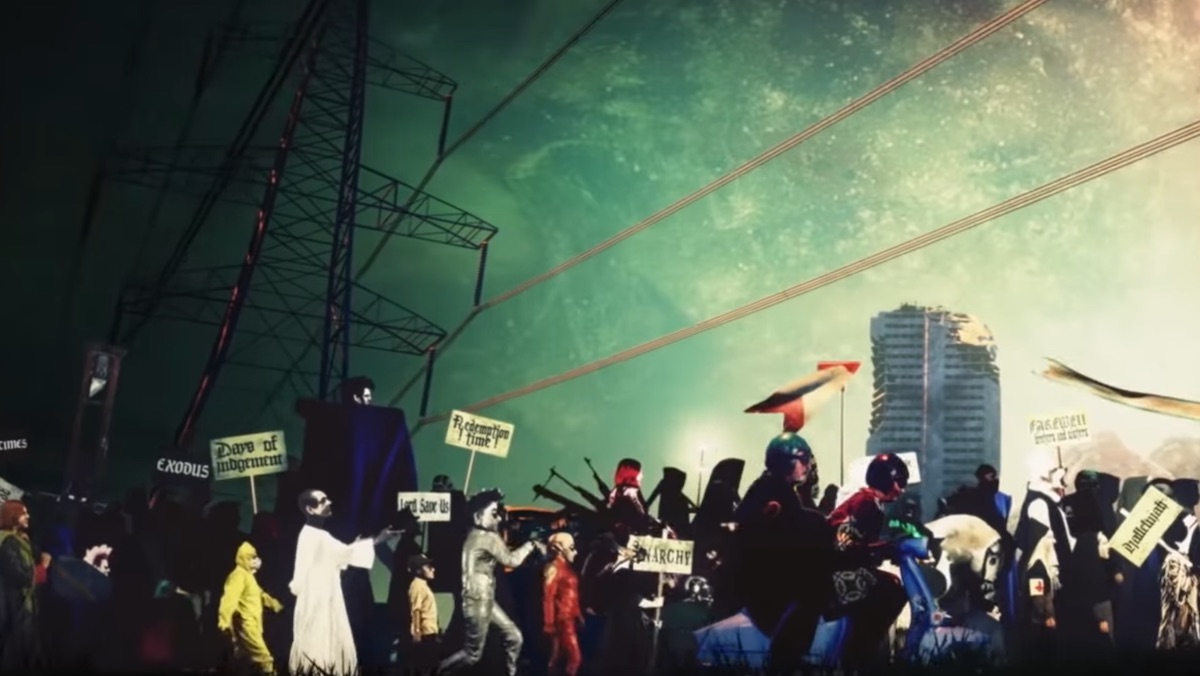 Of course, this is all happening on the dangerous road and secret homage to Satan, the London Orbital M25, which was one of Crowley’s greatest achievements. 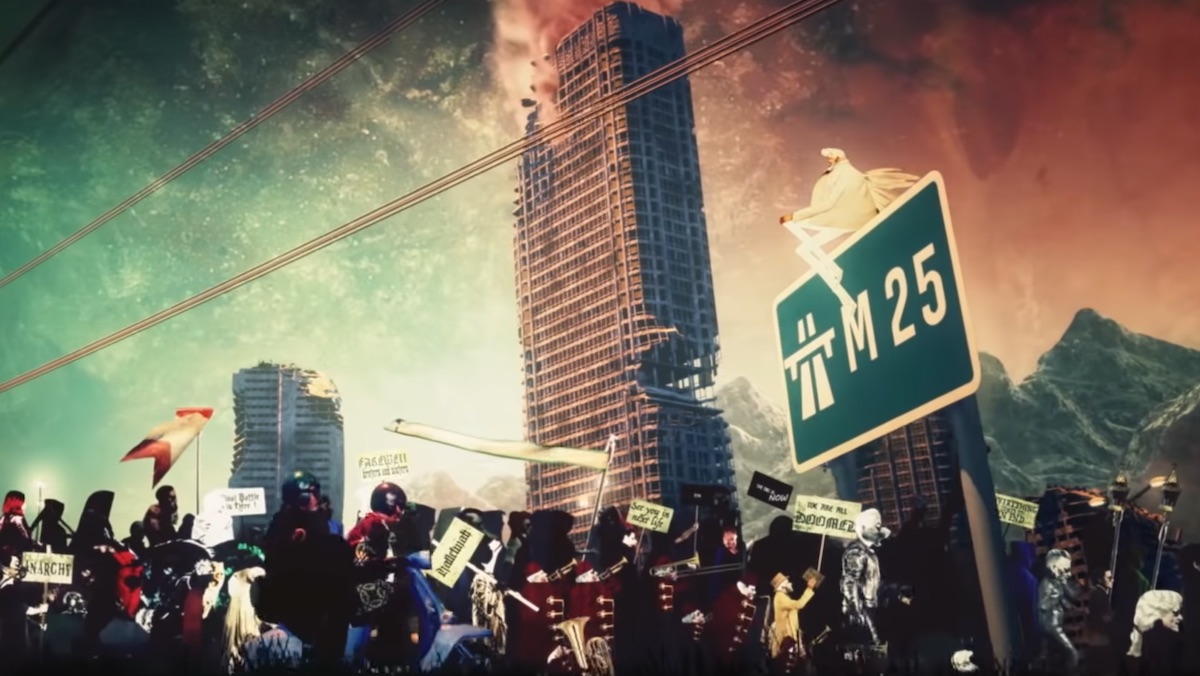 As the end nears, we see not one but two Hellhounds, a tribute to the great ghastly beast that Dog was before Adam changed him into a fun-loving and loyal little pet. 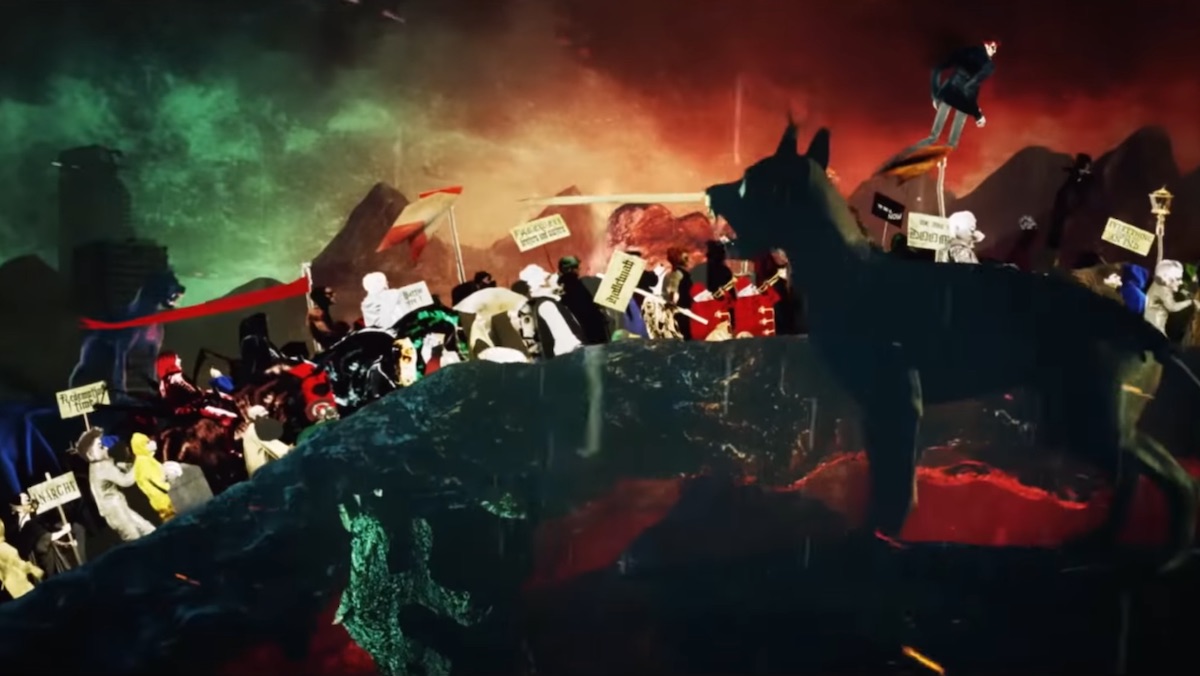 The final sequence has the damned going off a cliff. Is that witch at the front? If so, it could be the world’s only accurate prophetess, Agnes Nutter herself, who definitely would have seen this title sequence coming. 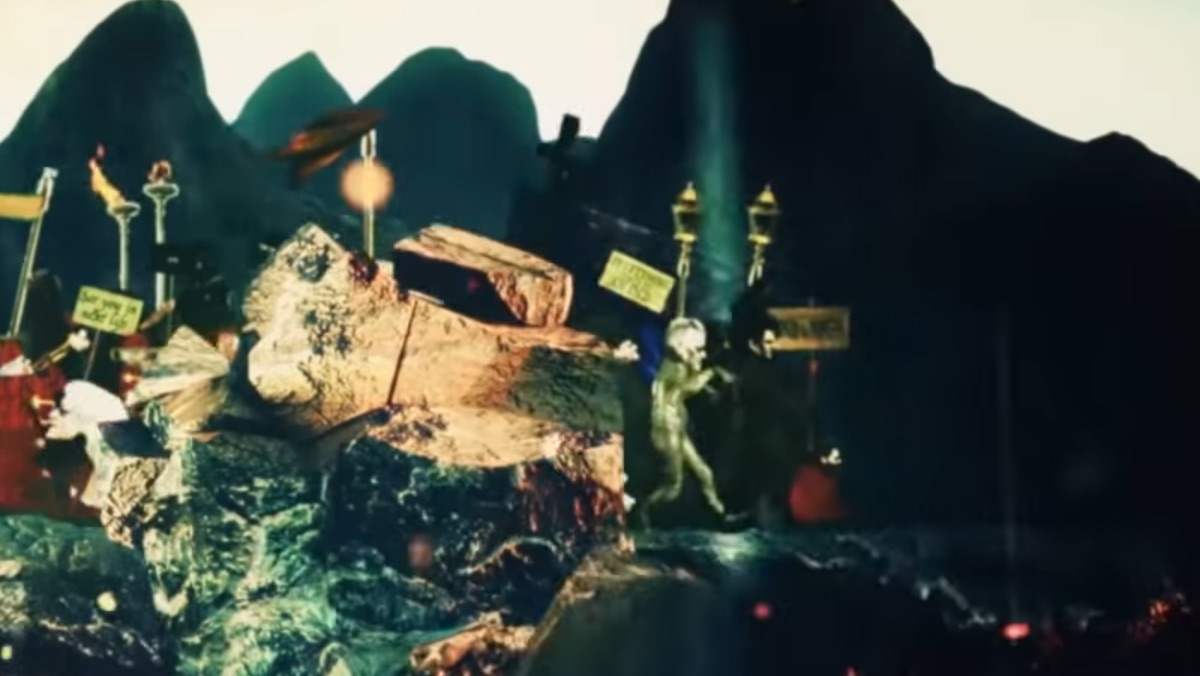 Finally, everyone (including a crucified figure) starts to go over; they each either get their wings and ascend or drop into the fiery pit below for all of eternity. 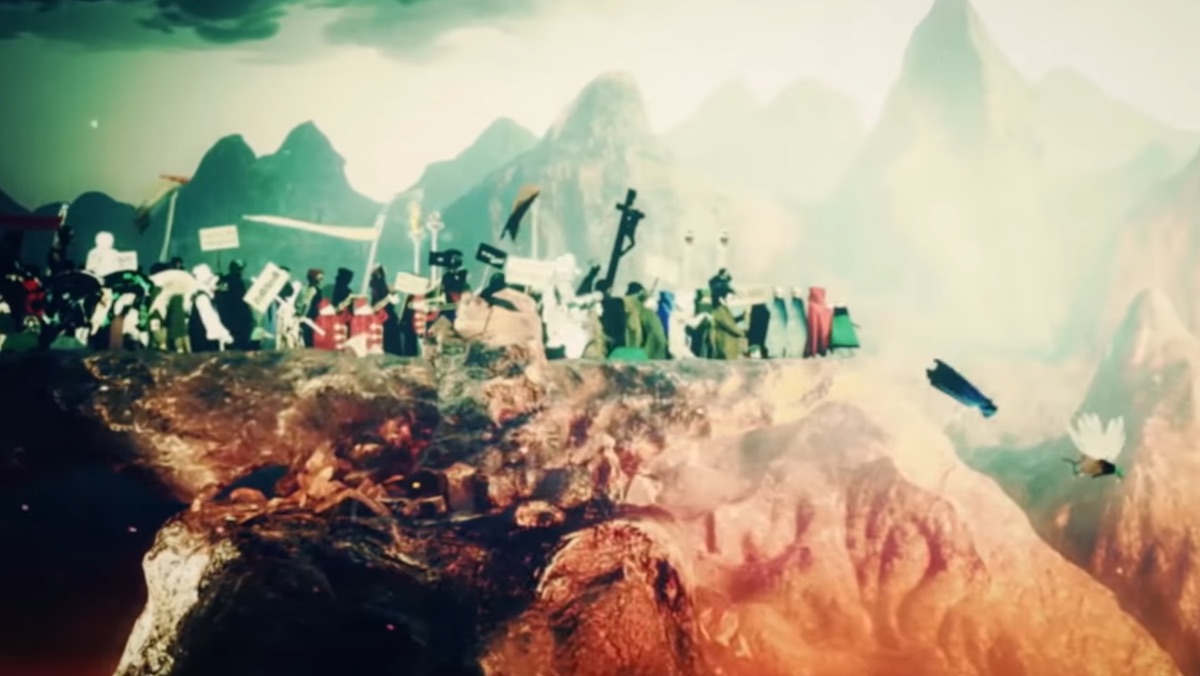 This entire sequence, from the animation style, to the dark-comedic tone, to the strange characters, feels very inspired by Terry Gilliam’s work on Monty Python. That’s fitting, since Gilliam was once attached to direct a movie adaptation of Good Omens.

We would have loved to see that, but now that we have the series coming, it’s not the end of the world it never happened. So long as the world doesn’t end before it premieres.