GM Tips Our series to help Storytellers and Game Masters improve their craft and create memorable roleplaying experiences. Last week, we covered getting started with your basic GM Kit. But what if you need to run games online? Let’s talk some logistics about internet

The vast majority of the articles and video’s we’ve covered have focused on your local table group. Yet every time I’m at a convention doing my panel ‘How To (Not) Suck At Storytelling’, I’m always asked about what to do if you don’t have a group. There have been other articles that showcase Roll20, Fantasy Grounds, or the top apps for running games online; that is not this article. If you’ve thought about storytelling online (or currently are), these are tips that I’ve found handy to make your game stand out from the crowd. 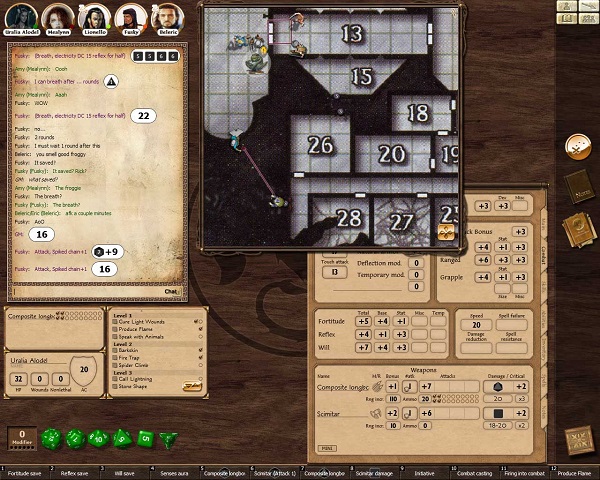 Scheduling your regular weekly session is already a difficult GM task in-and-of itself. Throw time-zones, different countries, and de-escalated sense of priority in the mix and it can feel impossible. Online storytelling is (subjectively) plagued with scheduling problems more than any in-person event will ever be—but we can head it off. The easy three-step checklist:

Over the years I’ve found the best way to maintain a regular schedule is to ensure that storylines focus on the players who are currently in the proverbial driver’s seat. Rather than try to NPC another’s characters, plan ahead that each session you will be missing one, if not two players. As the GM, I often keep a few five-minute side plots that give any character an excuse to step off screen for a bit that can be run later. My default goto is training or weapon repair: someone’s axe broke mid-fight and they are crafting a new handle (and crying), or your cyberpunk rigger needs a few hours to research some code. Set the structure of the game to support an absence in a session-by-session method and you’ll find scheduling concerns melt away without sacrificing game quality.

In live table sessions, a storyteller has an easier time holding players attention while they listen to his descriptions. The very nature of a computer challenges this attention with notifications, pop-ups, or that desire to just tab over to the next window. Online sessions have an advantage over a table top though in the ease of visual aids at your disposal. Rather than just having a few set pieces for major NPC’s and an occasional picture or two, you can easily throw up multiple pictures for a single character or scene.

Finding visuals, music, or even putting together small montages for your online players takes a bit more prep work so plan ahead. I’ve found that if you have a four-hour session slotted, plan an additional hour of time just for visuals and music. Over time you’ll build up a library (aka: obsessively name your files) so you can use them for future games or even tabletop scenarios with a tablet. Immersion for storytelling is a tried and true method, so you might as well use the greatest asset available to you.

The moment you put a digital screen between you and your players, you’ve got to pay more attention to tempo than anything else. Having a player who doesn’t understand how to use the format, or where they stored their sheet, or worse—fell asleep at the keyboard (I have seen this happen) ruins the game for all players involved. The moment you shift to being “On” as a GM you’ve gotta keep your players moving. In a four-hour time block, plan to lose an hour to shenanigans and the other three for gameplay. Your goal is to resolve the cliffhanger from last session and then end right as your players walk off another cliff to generate excitement for next time.

Do everything possible on your end to minimize delays on your end, and if possible force the clock on your players. There may be times where your players simply lose their action to indecisiveness—and that’s okay as long as you make it in game and fun for them. This tip does not mean race your players through a storyline with no character development. The goal is to remind you, as the gm, which scenes can be resolved as one-on-one side scenes or dealt with later. Make sure your players are always engaged.

Do you have any experience running online games? Please leave your tips in the comments below!