GM Tips is our series to help Storytellers and Game Masters improve their craft and create memorable roleplaying experiences. GM Tips has focused on advice, but sometimes we just need quick content past a writer’s block. These one-shot encounters are designed for inspiration in any system.

Loot. No matter what game system people play, there always seems to be equipment and loot to divide up. Magical weapons and heavy Glitterboy Megadamage canons get sought after by adventurers looking to increase their combat edge. If you really think on the topic, most campaigns are subtly (or not so) driving the war economy. Adventurer’s (or Shadowrunners) race out to earn money, find treasure, and then return to sell it. With their newfound gains, they requisition custom armor or buy special ammo to adventure again. Regardless of any overall campaign story, the PC’s often have a circular loop that feeds into the war economy.

So why not have a Demon of War make an appearance to some of the best customers?

Hal Morgan is the archetypical Demon of War. In modern setting games, he appears as a Tony Stark style charismatic chap, and in fantasy games—well not much different. Unlike other demons who are hellbent on watching the world burn, Hal rather likes things the way they are. It’s more fun when people have a fair fight because he believes it makes them better people (and he makes more money). The next time the characters enter a shop or go to purchase weapons and armor—Hal will take over as their personal concierge. 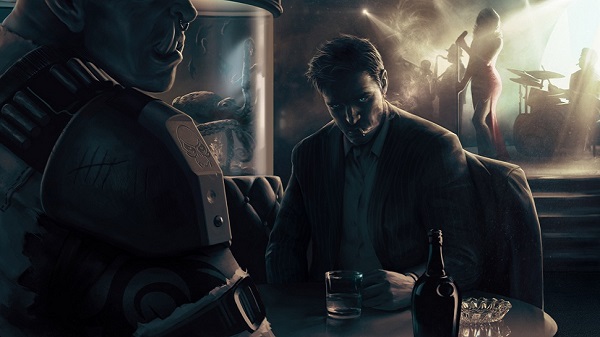 When a demon of war takes over as your personal weapons finder, you can imagine that trust… isn’t the first thing on your players’ mind. The first time Hal Morgan appears to the characters can happen in a hundred different ways, but always ends the same—he reveals that he’s a demon. Even in science fiction settings without an afterlife, Hal will still mention this title. Calling himself a Demon of War right away is a tactic to set the characters on edge. They’ll always be hunting for a catch, or might even refuse business outright, and yet some may toss caution to the wind and hop right in. From this point onward, Hal will always say he’s never lied to them, and they should trust him, for he’s got their best interest in heart.

The secret here is: He does.

Hal will offer to sell them weapons that are above their punching grade, even if they tend to cause explosions. Grenade launchers, rods of fireballs, swords that shoot fireballs, and small sticky bags that become fireballs (he’s got a lot of fireball effects) are all for sale. Of course, he’ll sell anything the characters actually need, but all of his weapons do a little bit more collateral damage. Use this encounter as a chance to sell your PC’s some tantalizingly above tier weapons at a lower cost. In most scenarios, players will assume that Hal the Demon has a catch, a hook, their soul is on the line or the weapons are cursed! In most scenarios, they might be right. All Hal really wants is to put more items of war into the economy and figured he’d go to his best customers first. We won’t let the players know that bit. Make the offer and deal seem as dangerous as you can push it. Hal will be entirely honest with his dealings, even if he simply leaves out the fact that selling them the weapons is what benefits him.

There are two outcomes to this encounter: they buy weapons or they don’t. If the characters bought weapons, then…they have some neat new weapons! As their storyteller, have fun with critical botches or critical successes by having extra collateral damage take effect. Even a simple dagger somehow has a little more oomph behind it. If the characters don’t buy the weapons… then give some overpowered weapons to the next set of villains the characters fight, cleary the same ones from Hal.

Chances are… they loot the bodies, and eventually, they will sell them.

Are you in need of quick encounters? Let us know in the comments what system-agnostic encounters you need!

Featured Image by: From Shadow by Gordon Bennetto for Shadowrun 5th Edition